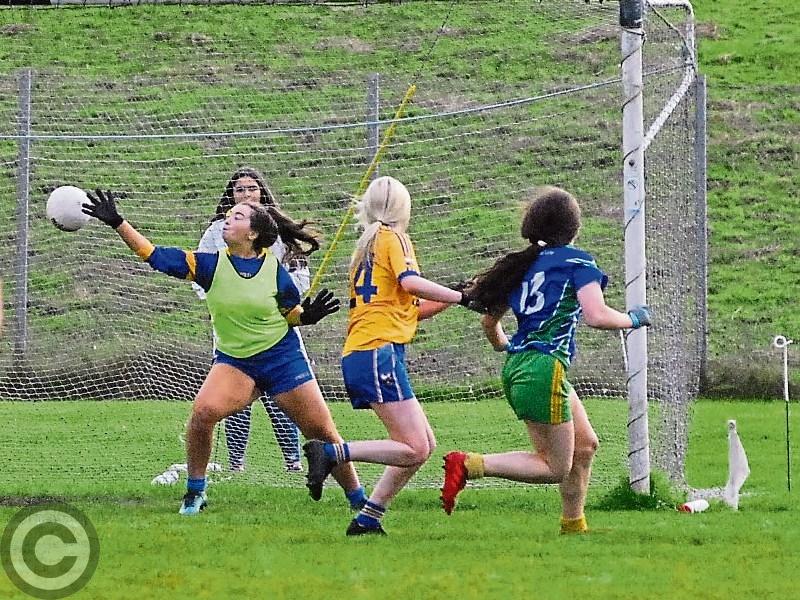 In a seismic shock in the Ladies game, two time Connacht Minor finalists Glencar/Manorhamilton were sensationally dethroned by a brilliant St. Felim's side who simply ran them ragged last Saturday.

Such is the aura of the north Leitrim side, backed by the incredible talents of Muireann Devaney, Leah Fox, Dearbhla Rooney, Aoife Gilmartin and Hannah Johnston, that almost everyone expected Manor to cruise to the title before launching another bid to claim the Connacht title.

But a superb St. Felim's, nervous at the start, slowly shed their inhibitions and simply ran the champions into the ground, something that was a feature of Glencar/ Manor's victories over the past number of years.

Incredibly, with 43 minutes gone in this contest, Glencar/Manor led 3-6 to 1-8 but they would fail to score as a rampant St. Felim's blitzed them for 3-5 before the final whistle in a truly astounding display.

Celine Shortt opened the scoring with a good point but it seemed to be the Leah Fox show for the first five minutes as two quick points were followed by an expertly taken goal. But Glencar/Manor never built on their early start as St. Felim's steadied themselves.

Muireann Devaney did put over a free but St. Felim's finished the half with points from Megan McGovern and Rachel McIntyre left just a point in it at halftime of a tense rather than free-flowing encounter, 1-3 to 0-5 for the two time champions.

St. Felim's came out the second half a much more confident team and it immediately showed on the scoreboard, McGovern soloing through to score before Lily Byrne got on the end of a goal move, her first shot definitely foot-blocked but she forced the ball across the line for a crucial goal and all inside the first minute.

Ciara McGoldrick then saw a palmed effort hit the post and rebound clear and Glencar/ Manor broke for Devaney to pop over a point. But it was St. Felim's who were now moving better with Megan McGovern and Ciara McGoldrick both pointing.

But Glencar/Manor weren't going down without a fight and in the space of eight minutes, an four point deficit was turned into a four point lead and again Muireann Devaney was at the heart of it, her good run leading to a clinically taken goal from Leah Fox.

Devaney hit a point to tie the scores before she took off on another run, perhaps getting away with overcarrying before burying a powerful shot in the net. St. Felim's tried to hit back but Rachel McIntyre's shot hit the crossbar before Leah Fox pointed to leave the score 3-6 to 1-8 in front after 43 minutes.

But instead of collapsing, St. Felim's immediately hit back with a goal when a superb run from Lily Byrne led to a cracking goal from joint captain Ciara McGoldrick. Celine Shortt hit a wide and sub Aoibhin McGoldrick forced a great save from keeper Alva Sheridan.

Glencar/Manor threatened again but had a penalty appeal waved away, St. Felim's breaking upfield for the speedy McIntyre to fire over. Lily Byrne then put two over in the space of a minute and suddenly the challengers were two clear with less than ten minutes left.

Both teams struggled for a score but it was the pace of Megan McGovern that saw her charge upfield that led to the vital score, a pass to Rachel McIntyre for a killer goal.

Eadaoin Clancy made a great block to deny Dearbhla Rooney as Byrne & McGoldrick added points to extend the lead to seven points before Lily Byrne put the final nail in the coffin with a great goal from a free over the top in added time.

Main Woman: Hard to pick just one when so many excelled for St. Felim's. Keeper Eadaoin Casey, defenders Emma Honeyman, Abbi Sweeney and Grainne Prior, attackers Lily Byrne and Ciara McGoldrick all stood out but hard to separate the trio of Celine Shortt, Megan McGovern and Rachel McIntyre three exceptional displays.

For Glencar/Manor, Leah Fox & Muireann Devaney were dangerous in spurts but keeper Alva Sheridan was their outstanding performer on the day with some great saves.

Talking Point: You'd have got long odds on anything other than a Manor win before this game but St. Felim's were well worth their win. And it certainly bodes well for Oughteragh Gaels and St. Joseph's going forward.

Turning Point: Ciara McGoldrick's goal for St. Felim's got them back into the game and gave the eventual winners a healthy dose of self-belief that they could win.

Ref Watch: Eugene McHale was a little inconsistent with some of his decisions but didn't alter the outcome in any way.

Highlight: Some fabulous goals from both sides but the image that stinks in the mind from the game is of the St. Felim's players racing up the field at full tilt time and time again in the second half.