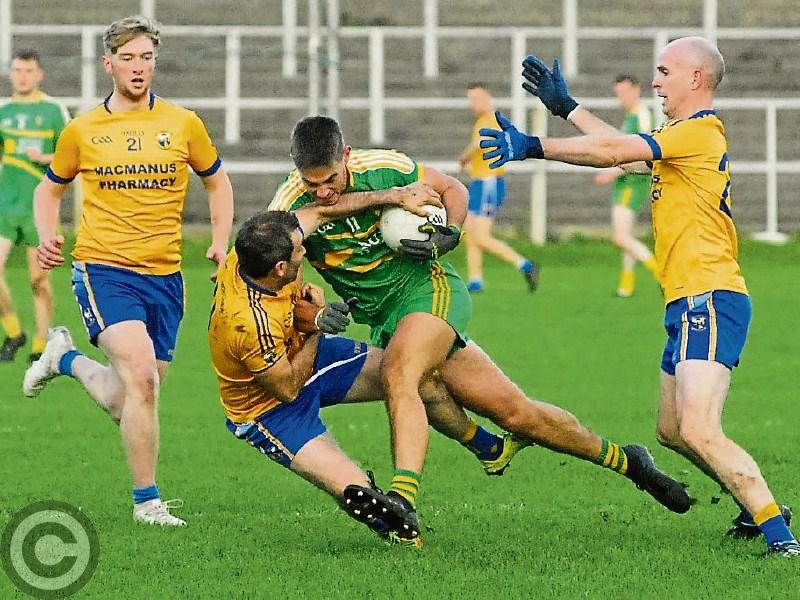 We came expecting a classic, a tight tense encounter but instead we witnessed a master class from Glencar/Manorhamilton and Conor Dolan in particular.

With everything seemingly against them, Glencar/Manor dug deep and delivered a display full of strength, character and resolve to absolutely run a stunned Ballinamore Sean O'Heslin's off the field.

Glencar/Manor started powerfully but had four misses before James Glancy opened their account on four minutes. Dean McGovern's run set up Shane Moran for a point a minute later but Manor suffered a major blow when joint captain Brian McDonald was forced off injured.

Replacement Declan Byrne had an immediate impact when a high ball into Seamus Ryder was played back to Byrne for a fine point on 11 minutes. Ballinamore drew level again when Donal Feely's crossfield pass came to Seamus McTague for an excellent point.

Glencar/Manor's hopes seemed distant when Adrian Croal suffered a bad hand injury and was forced from the game, both joint captains and wing-backs gone from the game inside 15 minutes.

Instead of destroying the north Leitrim men, it seemed to liberate them with long balls to Seamus Ryder and intense workrate among the forwards leading to a succession of scores.

Conor Dolan swept over two points before Evan and Declan Sweeney both pointed and a minute later, Declan Byrne got a second point and suddenly Manor were six points clear after an eight minute blast.

Evan Sweeney put over a free four minutes from time and with Ballinamore struggling badly, they needed something big to jolt them into life and they got it, albeit with a slice of luck when Niall McGovern won the ball back.

A pass into Shane Moran saw the former county man over-carrying the ball before losing it but Niall McGovern arrived on the scene and lashed a shot from the 14 yards out to the Manor net. McGovern then got a monster point from what was a sideline ball but which was taken from at least six yards into the field - still an incredible 50 yards score.

Conor Dolan scored a clever point but another McGovern free left the scores at 0-10 to 1-4 at the break, just three points between the teams and everything to play for.

But in a crushing display of superiority and strength, Glencar/Manor strangled the life from the game with four points inside the first three minutes!

Glencar/Manor were now seven points clear and whatever hope Ballinamore had was extinguished two minutes later when sub Wayne McKeon got his marching orders for an off-the-ball clash with James Rooney.

Manor could now afford to have their extra defender without sacrificing their attack and despite a free from Luke Murphy, they continued to add on the scores, Dolan putting over another free.

Niall Brady then killed off the game once and for all when he broke at speed and saw his shot loop into the net after a touch from keeper Denis Dolan, the lead now ten points.

Glencar/Manor continued to pour on the scores with Dolan hitting a free and from play before Ballinamore's Jim McTague received his marching orders, a black card to go with an earlier yellow.

Killian McGriskin raided from deep to fire over a point but Manor's serene march to the semi-finals hit a few road bumps with black cards for both James Glancy and Pat Gilmartin inside a minute.

Manor didn't let up, however, with points from Evan Sweeney, sub Ronan Flynn and Conor Dolan with just one in response from Oisin McCaffrey.

Main Man: Conor Dolan - ten points, seven from play, is an outstanding return by any standards but it was the manner he did it, combining an enormous workrate with some serious finishing.

Talking Point: Are Glencar/Manor this good? Or Ballinamore that bad? And what toll will the injuries to Brian McDonald and Adrian Croal take on the north Leitrim men who were also missing Gary Hickey in goal.

Turning Point: Crazy as this sounds but the two catastrophic injuries to joint captains Brian McDonald and Adrian Croal worked in Glencar/ Manor's favour. They went long ball and upped their workrate to simply blow Ballinamore away as Manor found victory in adversity.

Ref Watch: A disjointed outing for Eamonn O'Grady - made the right calls on his cards but could have blown for over-carrying in the lead up to Ballinamore's goal. A sideline ball that led to a Niall McGovern point, taken some six yards in the field, was a black mark for the officiating team.

Highlight: Niall Brady's goal was a real moment of class and inspiration.

Lowlight: We came hoping for a repeat of the drawn game but we got a damp squib as Glencar/Manor bossed this game from start to finish.