An old rivalry renewed - who will win 2018 clash of the giants? 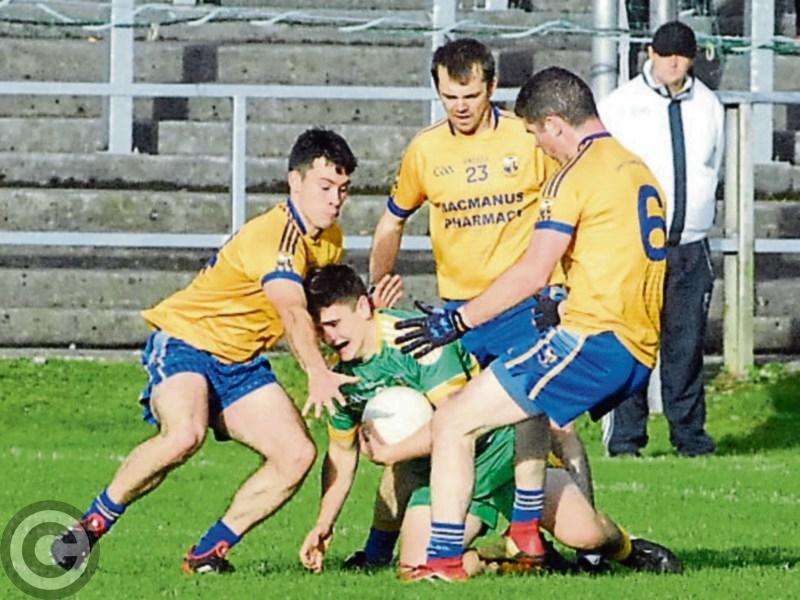 No escape for Luke Murphy as he is surrounded by Glencar/Manor's Fearghal Rooney, Shane Loughlin and Killian McGriskin in Pairc Sean Mac Diarmada. Photo by Willie Donnellan

These two teams have to be getting sick of the sight of each other at this stage, having met in two of the last three County Finals. And Glencar/Manor may just have history on their side when it comes to this year's title.

Twice before teams have lost three Finals in a row (Aughawillan 1986-1988 and Gortletteragh 1978- 1980) but in the fourth year, both went on to win the title and that is what Glencar/Manor are hoping for.

They looked mightily impressive against Ballinamore last Saturday but they suffered two big blows with injuries that might rule their joint captains Brian McDonald and Adrian Croal out of action.

That Manor were able to absorb and deal with those losses says so much about their strength in depth and resilience and it will give Mohill something to chew on ahead of Saturday's semi-final.

But Mohill will also have looked at the drawn game and replay very closely and if there is a team who have proven themselves able to master Glencar/Manor, it is Mohill.

The Champions have lost two immense servants in Ronan Gallagher and Darren McLoughlin but they haven't appeared to miss a beat. And the absence of Paddy Maguire from the Manor defence this year has to be a plus for the champions who have Keith Beirne back in full flow.

Mohill look at their best when they run the ball and if anything, they look to have gotten even faster around the field. Caillin Canning picked up a knock against Allen Gaels and they will want one of their key leaders fit and ready next Saturday.

Both teams are evenly matched with mobile defences and midfields and forward units that run up big scores. Who is better equipped to come through here is anyone's guess and it may come down to what players each team is able to get out on the field.

I really wouldn't be surprised with a draw here but I think Mohill will shade it after an immense struggle, injuries and two intense games perhaps catching up with Glencar/Manorhamilton.

So there you have it - we've put our necks on the line and we'll find out next weekend whether we are right or wrong. But whatever happens, you can keep up to date with the action at www.leitrimobserver.ie, on twitter @LeitrimToday or on Facebook. And of course, in next week's Leitrim Observer.