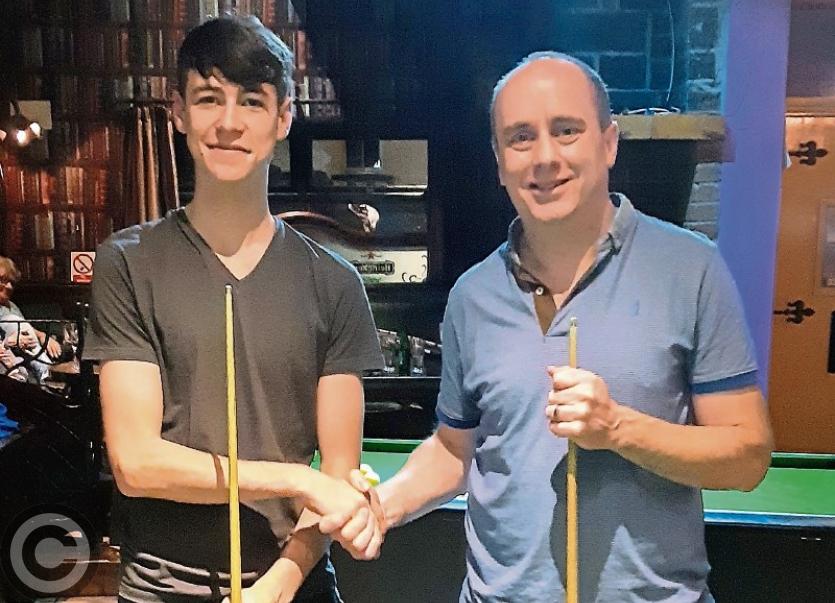 Brendan Shivnan & Lee McSharry before the Final of the Shane Barry Memorial Tournament.

Last Sunday the annual Shane Barry memorial tournament took place in Carthy’s Bar Leitrim Village. With 20 entries played over two tables throughout the day will races to 4 throughout.

The proceeds of this event are being donated to St Ciaran's hospice in Carrick on Shannon, we raised €320 as well as €250 that we raised at a previous event so in total we will be donating €570 to the hospice! Special mention to David Carthy of Carthy’s Bar who donated €100 and provided food at the event.

In the semi finals Jamie and Brendan ran it as close as it goes with Benny sneaking out a 4-3 win, Lee dispatched of Maurice 4-1.

In a very impressive final Brendan rushed into a 3-0 lead looking like not stopping but Lee fought back to 4-3 ahead! Brendan took out an incredible finish to pull the decider. In the decider Brendan and Lee both had chances but it was Brendan who took his.

This week sees the commencement of the new LPA premier league, this week’s matches are as follows with results due by Monday October 8, times and days for matches need to be posted in FB group.

Over the weekend we streamed a lot of the Shane Barry Tournament. In future we would like to be able to stream all our tables. To do this we need two Wifi cameras which we are looking for sponsorship for. Your logo will be on our stream and mentions in articles throughout the pool year and years to come. To find out more contact Dave on 0876490835.