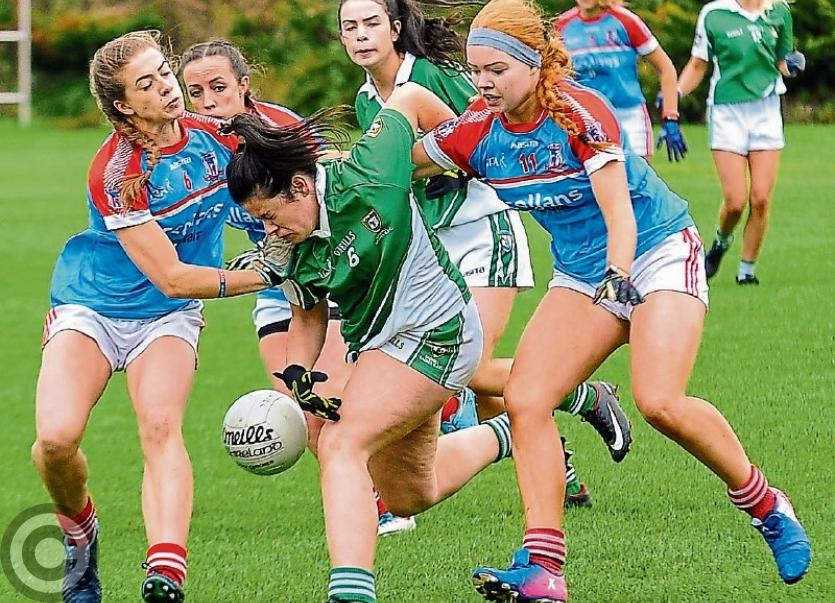 After a dramatic and pulsating Ladies Intermediate Championship Final it was St Francis who emerged victorious on Sunday afternoon last in Ballinamore but only after a titanic battle with Mohill.

It proved to be an encounter in which the momentum and the balance of power switched continuously with St Francis' blistering start countered by some wonderful scoring from Dearbhaile Beirne to leave the bare minimum between the sides at the interval.

The second half was equally as entertaining with a second Dearbhaile Beirne goal putting Mohill in control.

St Francis' success was based on their collective strength with a number of standout performances. Ailish Cornyn, Ciara McPartland and Aine Flood were to the fore for the Drumshanbo and Ballinaglera amalgamation with the midfield duo of Tanya McPartland and Mairead McCawley particularly instrumental.

McCawley's influence in the closing stages when were team were fighting for a win was crucial. She was full of running, always available for a pass and ensured no Mohill player was afforded an easy path out of defence. McCawley's role in the closing stages was ever bit as important to her opening contribution when she goaled after just 15 seconds.

Ailish Cornyn won possession from the opening throw-in and surged forward before off-loading to McCawley who finished past Mohill goalkeeper Michelle Hackett.

While there was a strong wind blowing in Ballinamore it was more than the elements that were proving troublesome for Mohill as St Francis bossed the opening exchanges.

Two Mohill attacks in the opening quarter saw Dearbhaile Beirne drop one shot short while on another occasion she was crowded out by the St Francis defence.

At the other end St Francis were ruthless. Points from Ailish Cornyn (three), Roisin McGrenaghan and Tanya McPartland (two, one free) gave them a commanding nine point lead after 15 minutes.

Mohill needed a moment of inspiration or their luck to change dramatically and that crucial moment arrived with 12 minutes of the half remaining when Aine Flood, who had been one of St Francis' best performers up to that point was issued with a yellow card and Mohill took full advantage.

Mohill registered their opening point when Dearbhaile Beirne released Claire Beirne who enjoyed the freedom to advance forward with her player in the sin-bin and she duly pointed.

Moments later Beirne converted a free and the comeback was definitely on a minute later when Mohill struck for goal. Dearbhaile Beirne's incisive run was matched by a fine finish from an acute angle to reduce the deficit to four points.

Another Dearbhaile Beirne point was cancelled out by a Tanya McPartland free before Mohill reduced the deficit to the bare minimum with practically the final kick of the half when Dearbhaile Beirne converted a penalty after Niamh Beirne was fouled.

Leading 1-7 to 2-3 as the second half got underway St Francis were evidently determined to regain the initiative and were awarded a penalty within a minute of the restart. However, Michelle Hackett was up to the task as she denied Aine Flood.

Mohill punished St Francis for that miss as they hit back with a goal and a point from Dearbhaile Beirne in quick succession to give Mohill a three point lead.

Another Dearbhaile Beirne point, followed by a score from Sarah Doyle further extended Mohill's lead and with 20 minutes remaining St Francis looked as though they were in trouble.

However, there was still time for a number of twists and turns in this dramatic final.

St Francis showed great hunger for the fight throughout and hit back with points from Maeve Daly, Tanya McPartland and Aine Flood to leave two points between the sides with a quarter of the game still to play.

An Ailish Cornyn goal after some incisive passing involving Roisin McGrenaghan and Ciara McPartland regained the lead for St Francis and Mohill were thrown further setbacks when both Mairead Stenson & Christine Quinn were issued with yellow cards in the latter stages.

A Beirne pointed free levelled matters with five minutes to go but St Francis were not to be denied and their strong finish was rewarded with late points from Tanya McPartland and Aine Flood to secure a deserved victory.

The Final brings to an end the Ladies Club season for adults in Leitrim with no Connacht Club campaigns this year and attention will turn to fielding a Leitrim Senior team in 2019.

Main Woman: Dearbhaile Beirne led the fight for Mohill with a personal haul of 3-5 but there were a number of standout performers for St Francis. Maeve Daly, Tanya McPartland, Aine Flood, Emma Dunne and Ailish Cornyn all shone for St Francis with the overall contribution of  Mairead McCawley giving her the edge.

Talking Point: There was a bumper crowd in Ballinamore for what proved to be a gripping encounter.

Turning Point: Mohill will point to the yellow cards shown to Mairead Stenson and Christine Quinn in the closing stages but St Francis' progress was  also derailed for a period when Aine Flood spent 10 minutes in the sin in the opening half.

Ref Watch: Ray McBrien received criticism for not punishing a number of hard hits, on both sides. However, he awarded two penalties and issued three yellow cards and deserves credit for the open manner in which the game was played.

Highlight: St Francis' second goal, 16 minutes into the second half saw the regain the lead in style. Ailish Cornyn, Roisin McGrenaghan and Ciara McPartland linked up brilliantly with some incisive passing and when the ball was worked back to Cornyn the finish was unstoppable.

Lowlight: Mohill will rue the fact that Dearbhaile Beirne was the only forward to score but there weren't many lowlights in this gripping contest.