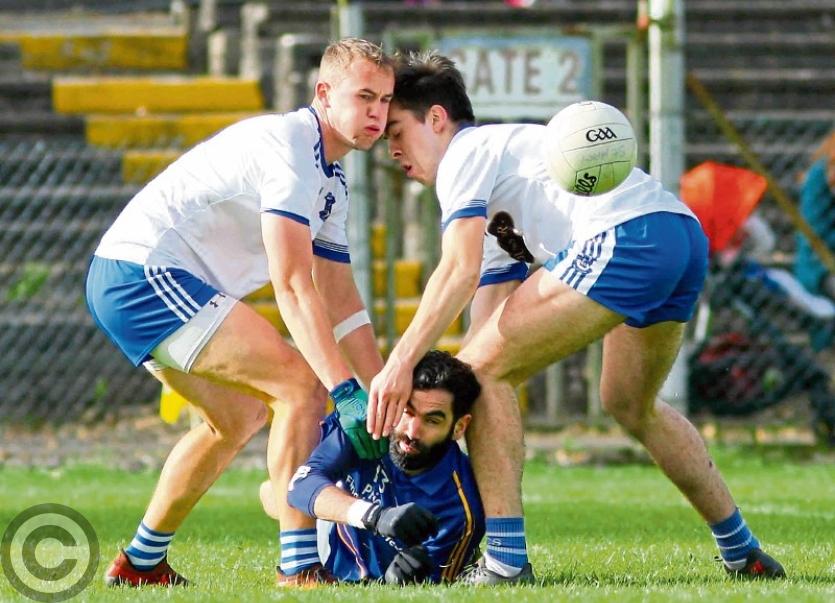 Aughawillan goal scorer Niall Beirne manages to get the ball away despite the presence of St. Mary's Kiltoghert's Micheal McWeeney and Fintan Earley last Saturday. Photo by James Molloy

There must be nothing more frustrating to a team than the feeling that they didn’t perform on the big day. And it was certainly evident in the words of St. Mary’s selector Thomas Crowe.

Crowe was quick to praise Aughawillan but admitted that his own team did not perform to what they are capable of - “I’d have to say we didn’t get moving like we hoped to, particularly in the first half.

“I’m sure Aughawillan had ideas that they weren’t going to allow that to happen but there was space out there, we just didn’t seem to use it well. They had a guy sitting back in front, we kicked a ball in a few times, they turned it over and we didn’t really take the right option we felt.

“We had a nice breeze and if we could have worked the ball up, we could have hit them from distance but it didn’t seem to happen. I felt we conceded a poor goal in the first half but I have to say we rallied, tried to create a bit more, got off the hook a few times maybe in our own end, and pushed on.

“The players left it all out there but I think the first half was where the game was won and lost, we just didn’t get up that head of steam.”

Missed opportunities cost the Carrick side and he contrasted their misses with Aughawillan’s efficiency - “We would love to come out in the second half and put something on the board, we had two opportunities, failed and maybe turned the ball over twice in scoring positions.

“They came down the field and they did what we needed to do, they got the scores and kept a little gap there. We felt that if we could have tightened it to one point early in the second half, perhaps we would have showed a bit of belief.”

“You say Pierce Dolan there today, great hands, you saw guys there coming back from injury, the Gilheany guy there, he was struggling all year and I don’t know if he scored three or four.”

Neither did Thomas seek to make excuses - “ A few guys missing but that wouldn’t be an excuse, we just didn’t get going the way we wanted to. They’re the little things, we knew we had a couple of young guys out there so it is asking a lot. We created a good chance, Jack Matthews had one, it just didn’t come off from him. We’re building in one sense that we’re trying to blood these new guys.”