Annaduff turn the tables on Eslin 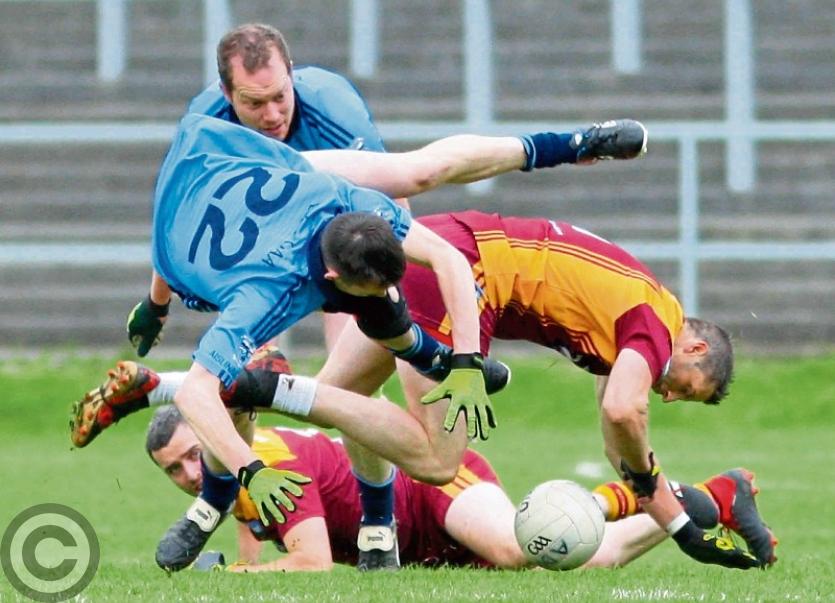 In all the talk of what might happen in this game, few imagined that Annaduff would do an “Eslin” on Eslin and bury them with an avalanche of goals.

Fans wondered how Annaduff would stop the goal threat posed by Eslin's goal-scoring heroes Conor and Niall Beirne but it was Eslin who struggled to contain a speedy and clinical Annaduff forward line that claimed four first half goals to kill this game.

Normally it is Eslin who plunder goals aplenty but they were on the receiving end this time as Annaduff's movement, pace and workrate was just too much for them in the first half as Annaduff gained ample revenge for their group stages loss at the hands of Eslin.

Granted Eslin brought a bit of excitement towards the end with two penalties in the space of a minute but all it did was left Eslin wondering what might have been, particularly if Tomas Beirne had stayed on the field rather than receive a needless black card for a foul well out the field just 15 minutes into the game.

A slow start saw Annaduff open the scoring six minutes in when good work from Kenneth Cox resulted in a fine Sean McNabola point. Annaduff were down two players at this stage with Mattie Cox & David Duignan going off injured, Duignan would later return after 11 minutes treatment.

But those setbacks didn’t seem to matter to Annaduff as they twice struck for goals in the space of a minute - a high ball broke off an Annaduff player and Alan Glancy swept it up, charged forward and drilled a great shot to the net.

Kenny Cox hit a wide but before we knew it, the ball was in the back of the Eslin net again - a move involving a raiding Jimmy Cox, a pass to Kenny Cox and then an off-load to an unmarked sub Ray Cox for one of the easiest palmed goals you might see.

Incredibly, the goal rush continued but this time it was Eslin’s turn - a brilliant Conor Beirne offload released Jamie Stenson who burst forward but saw his powerful shot parried by keeper Jim McCormack. The ball rebounded up and Niall Beirne was on hand to force the ball to the Annaduff net on 11 minutes.

That was as good as it got for Eslin and Tomas Beirne then received a black card on 15 minutes for pulling down an Annaduff player in a rash act.

Eoin Gill scored a lovely point from the corner while sub Gavin O’Brien was denied a goal when his chipped shot was saved on the line. Unfortunately for Eslin, O’Brien didn’t have long to wait for a goal as he got onto the end of a pass, the ball rebounding off his legs and into the net on 20 minutes.

Ronan McCormack almost added to the goal rush but his flick was stopped on the line. Eslin halted the Annaduff run of scores with a Conor Beirne free but Annaduff were rampant as Sean Duignan fisted the ball over the bar after a McCormack dropped short.

Jamie Stenson put over a wonderful free over from the left wing but there was one final kick from Annaduff as a long ball found Sean McNabola who burned the full-back and blasted the ball to the net.

Eslin tried to hit back with Conor Beirne forcing a double save from Chris Farrell and Jim McCormack, the ball going over the bar when a goal looked certain. Beirne added a free as Annaduff went into the halftime break with a commanding 4-3 to 1-4 lead.

The second half was a much more sedate affair with an initial burst of a point each from Gavin O’Brien and sub Eamon Stenson but both sides then started to hit bad wides as the pace left the game.

Kenny Cox added a brace of frees on 12 and 14 minutes and another excellent effort from play on 25 minutes. It wasn’t all one way traffic as Jim McCormack made a good save from a fisted Brian Higgins effort, set up by Conor Beirne, while Higgins saw another shot blocked.

Eslin’s refusal to give in gained reward when Eamon Stenson was taken down with less than three minutes to go, Jamie Stenson expertly sending the penalty to the net.

Incredibly, less than a minute later, Jamie Stenson was standing over the penalty spot again and again for a foul on Eamon Stenson who was charging through on goal. This time, McCormack stopped the kick but Stenson gathered the rebounded, sidestepped the keeper and blasted to the net.

Suddenly an 11 point Annaduff lead was down to five points and Annaduff fans must have been worried but Eslin were never able to engineer another goal opportunity and Annaduff deservedly hung on for a place in the Final.

Talking Point: Before this game, it was felt that Eslin would pose the goal threat. Instead it was Annaduff who did an “Eslin” on Eslin, scoring goals at critical times that simply killed the Eslin challenge while the sin-binning of Tomas Beirne definitely robbed them of self-belief. And you have to give Annaduff enormous credit for their execution and the way they dealt with the threat of Conor Beirne.

Turning Point: Gavin O'Brien goal might have rebounded off his legs into the net but it was the goal that broke Eslin's resistance and set up Annaduff for victory.

Ref Watch: Seamus Mulhern had a relatively easy job, let physical challenges go a bit but made the tough decisions and got them right.

Lowlight: Until Eslin produced their late two penalties, the second half was a drab affair that didn't live up to the first.