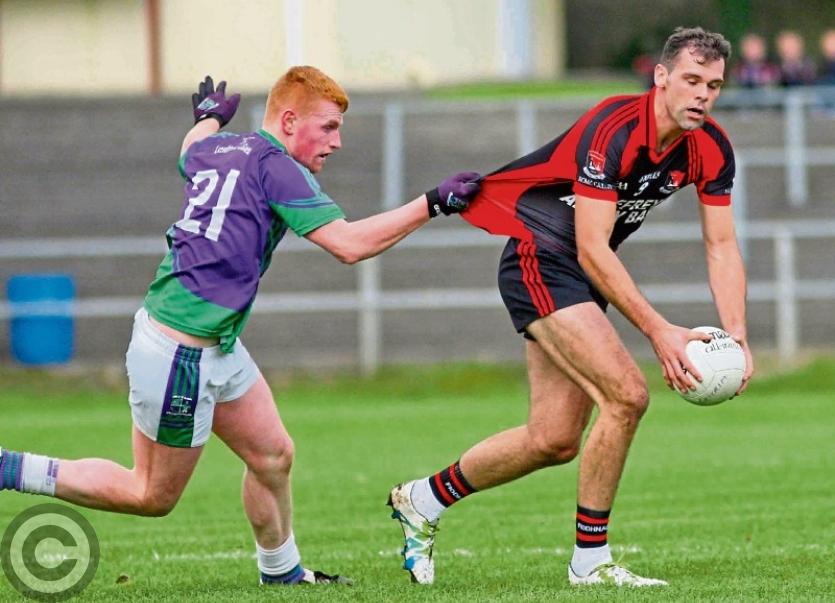 Fenagh lost by nine points to the Gaels in the group stages and in last year's knockout stages but in a tense and tight encounter last Saturday, it was St. Caillin's who managed to produce when the pressure was on, outscoring last year's finalists by nine points to five in the second half.

When they look back on this game, Leitrim Gaels will curse a missed penalty that would have drawn their team level with time almost up and three frees that dropped short into the hands of Fenagh defence.

But the Gaels were unable to deliver on their own considerable talents while Fenagh stifled the Gaels' attack and the duo of Riordan & Ryan O'Rourke created enough scoring opportunities to book Fenagh's place in the Final.

Shaun Chandler opened the scoring for Leitrim Gaels after just 45 seconds but Fenagh almost goaled when Riordan O’Rourke turned his man and bore down on goal only for keeper Brendan Flynn to make a great save.

Ryan O’Rourke converted a free, a harsh call after Niall Butler appeared to overcarry, but David Bruen sprinted clear and swung over a point on four minutes. Jack Gilheaney’s then found Conor Dwyer in space, Dwyer spinning sharply to score on seven minutes.

From the kickout, the Gaels responded with a catch, a quick free and David Bruen sprinted down the wing before punching the ball over the bar. Ryan O’Rourke tapped over a free on ten minutes to tie the scores at 0-3 points apiece.

Unfortunately, the pace went from the game as teams became defensively minded but it was Fenagh who were missing the majority of chances with poor shot selection while Aidan Flynn was yellow carded for an off-the-ball foul on Ryan O’Rourke.

Riordan O’Rourke also saw yellow for throwing the ball away before Eunan Treacy converted a 45 free to end a 12 minute spell without a score. The wides continued before Niall Butler put over a nice point to tie the scores again.

But Leitrim Gaels upped it a gear or two approaching the interval with an excellent long range Stephen Goldrick point followed by a massive 55 yard effort from Treacy that gave them a 0-6 to 0-4 halftime lead.

But Fenagh wiped that lead out in the first three minutes of the second half, Ryan O’Rourke converting a free for a foul on Riordan O’Rourke inside 40 seconds. Donal Wrynn then thumped a massive 40 yarder over the bar before Shane Doonan broke through to put Fenagh into the lead.

Leitrim Gaels were struggling a bit with yellow cards for Liam & Colm Moreton while Brendan Flynn intercepted ahead of Ryan O’Rourke but Enda Moreton kept a Gaels play alive by soloing across the field and playing a one-two with brother Colm before pointing.

Ryan O’Rourke was beginning to find some freedom as his run and dodge led to a point but good work from Stephen Goldrick two minutes later resulted in Colm Moreton breaking through and firing over a wonderful score.

Fenagh were finding it easier to score and a patient move ended with Riordan O’Rourke taking a good point on 13 minutes. Crucially, Leitrim Gaels were unable to respond with Eunan Treacy seeing a free caught on the line by Jack Gilheaney.

Fenagh counter-attacked where a yellow card for David Bruen for a foul on Ryan O’Rourke resulted in Donal Wrynn shooting a 50 yard free over the Gaels with 11 minutes to go, the first time Fenagh led by more than two points.

A Niall Butler yellow card allowed Treacy to convert a free while James Flynn appealed for a penalty but Fenagh were starting to visibly grow in confidence, sub Michael Doonan availing of good work from Riordan O’Rourke to point with seven minutes left.

From the kickout, Fenagh got the ball back and although Riordan O’Rourke’s long range effort appeared to be heading wide, a timely gust of wind saw it curl inside the post to put Fenagh three points ahead.

Leitrim Gaels were handed a huge lifeline when Stephen Goldrick was taken down as he tried to burst through the Fenagh defence after a high ball into Conor Guckian.

Unfortunately for Leitrim Gaels, Eunan Treacy dragged his spotkick wide of the left hand post with the keeper gone to his left. And to make matters worse, from the kickout, Conor Dwyer managed to disrupt two Gaels players contesting the kickout, the ball came to Ryan O’Rourke who finished off a great run with a point.

Leitrim Gaels kept coming and with a black card for Michael Doonan, Fenagh were glad to see a powerful Aidan Flynn parried by Paul Gill and even more relieved when the ball hit the crossbar and went over with a gang of Gaels players charging into goal.

The Gaels kept coming and a Treacy free meant there was just two points between the teams but with four minutes of injury time up, Fenagh were able to keep the ball and even a wide from a Wrynne didn’t matter as they scored a famous victory.

Main Man: In a game where both sides were intent on cancelling each other out, Jack Gilheaney made some big contributions at both ends of the field.

Talking Point: Leitrim Gaels missed a penalty and dropped three frees short and will feel they left this game behind them but they never truly flowed as they are capable, Fenagh's tightly packed defence ensuring they weren't caught for the scores that sunk them in the group stages. And perhaps Leitrim Gaels' moves to counter Fenagh's strengths robbed them of their own strengths.

Turning Point: Might seem strange but Eunan Treacy's missed penalty was the big moment. A goal at that stage would probably have pushed the Gaels to victory in the final minutes.

Ref WatcH: Kevin Mallon did  a good job. Got a few early calls wrong but came back strongly and made the big decisions well.

Highlight: A titanic struggle between two evenly matched sides was fascinating, even if the quality was poor at times. And you have to admire the way Fenagh seize the game in the second half.

Lowlight: This was a game that went long periods without a score and some awful shooting, from both sides, as the tension seemed to get to two sides.