Football's revolution will not be televised 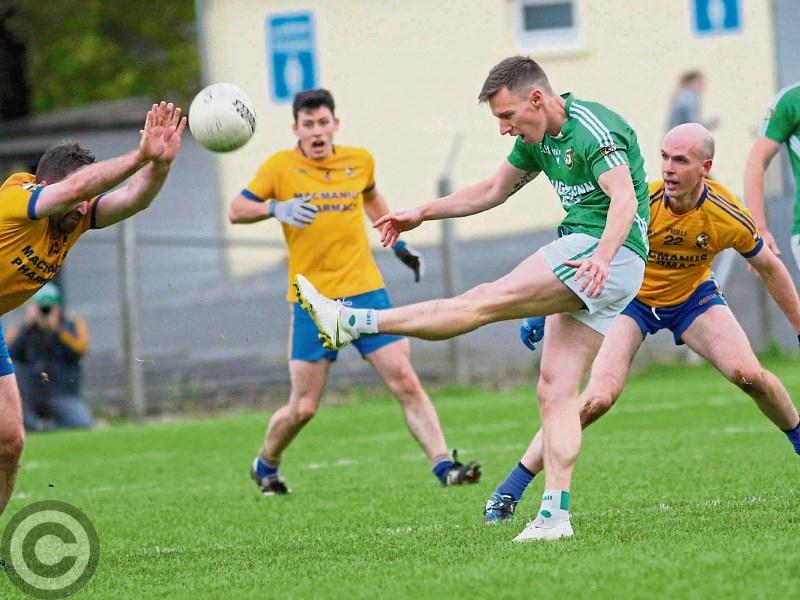 Mohill's Ronan Kennedy shoots for a point against Glencar/Manorhamilton. Photo by James Molloy

Mark Twain reputedly responded to newspaper reports that he had passed away with the public announcement: ‘Rumours of my death have been greatly exaggerated.’

I think Gaelic football may soon make a similar statement. Mohill’s incredible win over Manorhamilton was based on attacking football of the finest order. Mohill have always played football on the front foot but they have rarely clicked the way they did on Saturday. Even in their winning county final appearances.

Every now and then football needs a performance like that to shake things up; to remind everyone what can happen when you allow lads to just go out and express themselves.

The negative press regarding Gaelic football has gone into hyperdrive and has lost all perspective. It’s true that there has been a lot of negative football played, and some of it has been very hard to watch.

What many people loved about football and hurling is its man to man nature. Players pit themselves against their direct opponent and did everything in their power to dominate them; if you won your battle and controlled your patch, you did your job. If the majority of players on your team managed to do the same, likelihood was you won. I loved that element of the game – the psychology of it, challenging a direct opponent to match you physically, the raw simplicity of it.

But it was inevitable that coaches would explore new approaches in the game’s modern era. Every aspect of sport (indeed life) is now subject to minute examination. Gaelic football does not exist in a bubble – its tactics were always going to come under the microscope too. It’s healthy and part of our evolutionary nature.

It’s also natural to resist change, and pine for the good old days. But those old days are often viewed through rose-tinted glasses. I’ve been watching re-runs of many inter-county football matches of the 1980s and 1990s, including All Ireland finals, on EIR Sports Classic GAA.

Much of the football on display is poor quality – there is no other way to put it. Yes, it was raw and wild and that brings an element of excitement. There are moments of individual quality. But the litany of errors and the constant over-turning of possession results in a helter-skelter nature that some interpret as exhilaration; for me it reveals a lack of any real rhyme or reason underpinning what the teams are trying to do, other than ‘win the game’.

The simplest example is when a defender wins the ball and blindly hoofs it up the field, usually into the arms of an opponent. Pundits often claim that it was then the job of the attacker to win that ball, but why not at least try to give your team mate the benefit of a pass in their favour.

Many still yearn for those days, as evident in the frequent exalted roars from supporters to ‘kick the ball for goodness sake’. It is a cry for the good old days, when men were men and defenders tried to kill you. But the brutality of the tackling, and the regular blatant attempts to do damage to opponents, leaves a bitter taste. Yet this is held up as the golden era of football by some of today’s pundits who played at that time.

Things have gone too far the other way. No one wants to see 14 men behind the ball or the depressing scenes from a Derry championship match that recently appeared on social media. Slaughtneil, attacking and a couple of points up as the clock ticked towards half-time, ended up tapping the ball back and forth, uncontested, on the halfway line as their opponents retreated into their own half. Slaughtneil won the game. Their opponents were so crippled by the fear of losing the game they forgot to play one. They retreated in a farcical manner and paid the inevitable price.

The blame for this overly negative approach is usually laid at the door of Jim McGuinness’ Donegal. That his team won an All-Ireland title suggested to far too many coaches of a lesser capacity that this system was the answer to all their problems.

It wasn’t and it isn’t. Many sheep followed a path that had been laid down by wolves. That was an exceptional group of Donegal players, driven by ambition and ability, and a backroom team with a vision and a single-minded determination to bring it to fruition.

Last weekend Gaoth Dobhair hammered Bundoran by 8-13 to 3-12 in the Donegal championship. Those who attended the game described it as a blanket attack suffocating the opposition. Maybe Donegal could prove the catalyst for another football revolution? Mohill may have started a similar revolt in Leitrim. But the thing with revolutions is that there’s always two sides in the fight, and Aughawillan will be waiting in the long grass.

Whatever side comes out on top, this revolution will not be televised, so be sure to get along in person to what promises to be a cracking county final. The victors will rule Leitrim for another year.