Oh brother where are thou? Finals will be a real family affair but don't forget the cousins! 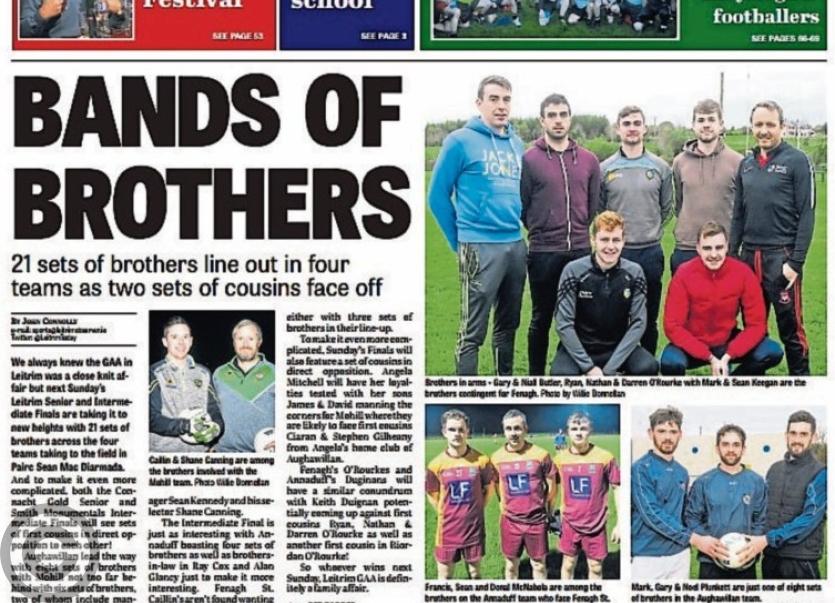 Some may say that your club is like your family but in Leitrim GAA, it is really taken to extremes with 21 sets of brothers between the four teams taking to the field next Sunday.

And that's before we mention the prospect of cousins marking each other in both Finals!

Aughawillan lead the way with an incredible eight sets of brothers to really live up to the tag of a Band of Brothers!

There are three each in the Plunkett (Noel, Gary & Mark) and Prior (Barry, Chris & Michael) clans while the McGovern, McTague, Gilheany, Maxwell and O'Hare households supply two each!

Next up is Champions Mohill with six sets of brothers with boss Sean Kennedy joined by brothers Ronan & Ciaran in the Green & White while three Flynns (Domhnaill, Stephen & Niall) are joined by three Harkins (Evan, Sean & Ethan). Add to that two Mitchells, two Cannings and two Gordons for the six sets of brothers.

And then there is also the brother-in-law connection with Ray Cox and Alan Glancy to further the links!

That's an incredible line-up of brothers but it gets even more interesting when first cousins are considered with both finals featuring a clash of cousins.

Mohill's David & James Mitchell could well be marking first cousins Ciaran & Stephen Gilheaney in the Senior Final and that could be repeated in the Intermediate decider!

Brothers Ryan, Nathan & Darren O'Rourke are joined in the Fenagh team by cousin Riordan and they could well come up against first cousin Keith Duignan who is in line for a recall to the Annaduff first team after missing the semi-final.

So that really makes it a family affair!