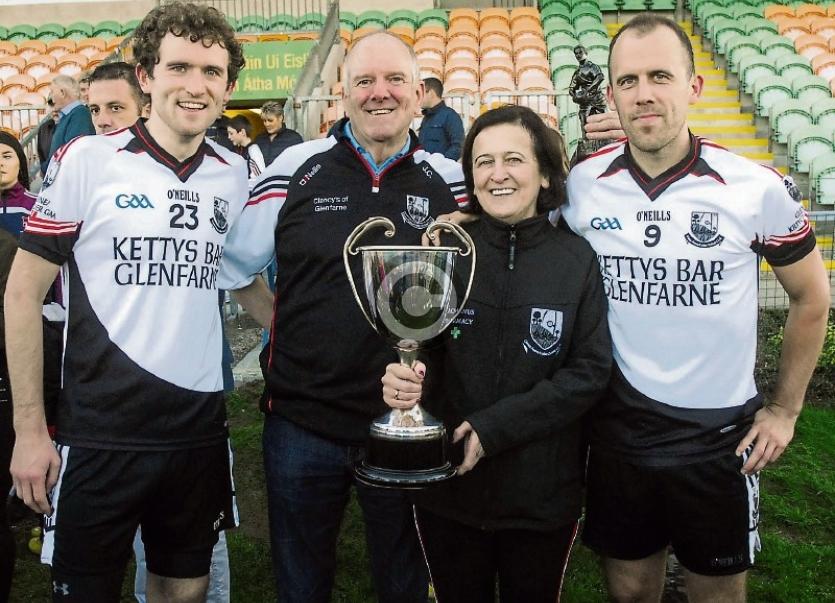 Man of the Match Fergal Clancy (right) pictured with his brother Niall and parents Jim & Assumpta. Photo by Willie Donnellan

Glenfarne/Kiltyclogher have arguably felt the hammer blow of emigration more severely than any other club in recent years, ultimately resulting in the club being relegated last year from the Intermediate Championship.

Twelve months later and the outlook is much healthier as Glenfarne/Kiltyclogher won the Pyramid Bookmakers Junior A championship thanks to their victory over near neighbours Glencar/Manorhamilton in last Saturday’s final.

Man of the match Fergal Clancy had a dream return to the Glenfarne colours after spending a few years in the colours of Ballyboden St Enda’s as the former County star stamped on his quality on Saturday’s final.

And Fergal felt there was no secret to Glenfarne’s success this year, it was simply a matter of numbers - “It’s great, it’s been well publicised we have had a tough couple of years but this year, for whatever reason, we struck a bit of luck and a couple of lads started coming back that were away the last few years and the whole club rallied and one thing led to another.

“It shows the difference when you have bodies around. Football has always been the club. We had a couple of tough years with emigration and that really hit us hard but when we get the footballers back we can always say that we have a team that can compete for silverware.”

The scenes of celebration at the full time whistle as players, management and supporters united on the pitch in Ballinamore were heartwarming but Fergal was wise enough to know that he and his teammates knew they had to take care of business on the pitch before the celebrations could began.

“We’ve all been around long enough to know fairytales don’t always come true on the football pitch. It’s brilliant, it means the world to these people here. The club has slogged for many, many year, not just the last few years, I think it is 27 years since we won any silverware. It’s a long way to 1991 for the fans and the people in the club who drove it year after year.”

While those who had taken care of business on the pitch were being warmly congratulated by friends, family and neighbours Fergal was quick to pay tribute to the loyal servants who had kept the show on the road when the club was struggling - “The players turn over but the people behind the scenes are always driving on and it means the world to them just like it does to us. It’s great to see everyone so happy.”

Fergal acknowledged the support from the stands in Ballinamore was felt on the pitch, particularly when the game was in its closing stages.

“For whatever reason, I think it’s the small confines here in Ballinamore, the echo in the crowd, I didn’t notice it in the first half but certainly in the second half when things were in the melting pot the crowd could roar and that definitely does help the players.

“It’s great, it’s a small area but there are people here from different parts of the county and country who have Glenfarne roots and they all got behind us today and definitely you could notice it in the second half.”

Glenfarne’s memorable victory means they now advance to the Connacht Junior Championship and Fergal is relishing the prospect.

“It’ll be new to a lot of the lads and it will be great to experience that. We are a club that hasn’t experienced big days too often so it’s great for the lads that are going to experience a Connacht Championship game now and it’ll hopefully bring them on and it will be something they will want to do again. It’s all good, it’s all great.”