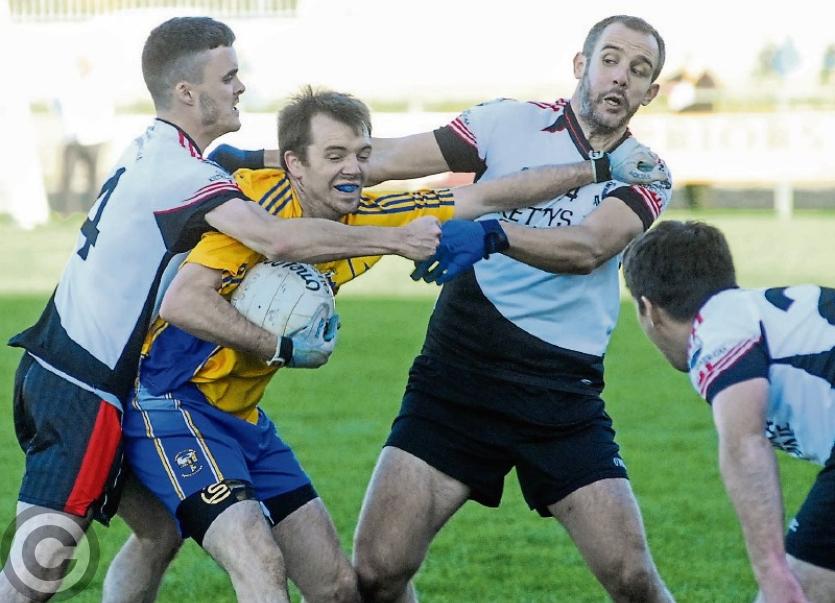 Glenfarne/Kiltyclogher ended a 27 year wait for silverware on Saturday afternoon last when they defeated Glencar/Manorhamilton in the Pyramid Bookmakers Junior A Championship Final to spark scenes of great celebration and unbridled joy.

Glencar/Manor had been widely tipped as the favourites to claim the Junior crown and go some way towards making up for the disappointment of losing the senior championship semi-final a week earlier.

While there may be a strong rivalry between the two North Leitrim clubs it would have been impossible for anyone in Ballinamore last Saturday not to be swept up in the excitement of Glenfarne/Kiltyclogher’s success.

It didn’t prove to be the open, exciting game that had been hoped for as in reality the game took a long time to burst into life. The bumper crowd helped create an atmosphere fit for a final but for large parts the action on the pitch didn’t match the excitement on the field of play.

Glencar/Manor started brightly with Aaron Hickey and Ronan Flynn, two men with inter-county experience, linking up well and they looked as though they were going to cause all manner of problems for Glenfarne.

Glenfarne/Kilty struggled to get to the pace of the game in the opening exchanges but their talisman, Fergal Clancy registered their opening score in the seventh minute. Darren Murray’s mishit free was easily cleared by the Manor defence but they succeeded only in clearing the ball as far as Fergal Clancy and from a more difficult angle than the original free Clancy slotted the ball between the uprights.

The partnership between Hickey and Flynn almost saw Glenfarne come unstuck moments later. Hickey’s precision pass was well taken by Flynn who went down under contact in front of the Glenfarne goal but despite the Manor appeals no penalty was awarded.

As the half continued Glenfarne grew in confidence while the Manor players seemed to be struggling to get to grips with the contest.

A Fergal Clancy free levelled matters in what was proving to be a very low scoring affair.

With seven minutes of the half remaining Glenfarne, noticeably improving as the game went on, put their best sequence of passing together and were unlucky not to register the game’s opening goal.

Fergal Clancy and Darren Murray advanced dangerously before Murray delivered a dangerous ball towards Niall Clancy but he was unable to force the ball past Glencar/Manor goalkeeper Colin Gilligan. However, the ball was only half cleared and Darren Murray was on hand to dispatch the ball over the bar.

A Fergal Clancy pointed free opened up a two point lead as Manor retreated deeper and deeper into their own half. It should have been even better from a Glenfarne/Kilty point of view but three wides in an as many minutes from Niall & Fergal Clancy and Darren Murray meant they were struggling to have their superiority reflected on the scoreline.

With the final attack of the half Fergal Clancy converted another free to give his side a 0-5 to 0-2 lead but they needed no reminder that the job was far from complete.

Having failed to register a score since the third minute, Glencar/Manor scored the first point of the second half, 45 seconds after the restart with Paul Clancy on target after Ruairi Sheridan’s pass. Fergal Clancy re-established the three point lead after he converted another free, following good use of the advantage rule by referee Michael McGirl.

The second half was continuing in much the same vein as the opening 30 minutes had played out. Manor looked threatening when advancing but time after time saw players outnumbered in the tackle resulting in the ball being turned over cheaply. Another Fergal Clancy free saw the lead extended to four points.

The workrate of midfield duo Fergal Clancy and captain Barry McDermott typified the determination that Glenfarne/Kilty brought to the occasion. To put it simply, it looked as though the game meant much more to the players in white & black.

A wonderful point from Ronan Flynn appeared as though it may have been the flash of inspiration needed by the Manor players to reinvigorate their challenge but their neighbours responded once more.

A Darren Murray free saw a free that should have been straight forward come back off the upright but again display their tenacity Glenfarne/Kilty reacted quicker to the breaking ball and it was worked back to Murray who made no mistake at the second time of asking.

Another Fergal Clancy free opened up a five point lead and the excitement among the large contingent of Glenfarne/Kilty supporters was being translated onto the pitch where the sense of belief among a team who have suffered a gruelling 12 months suggested it would take an incredible finale from Glencar/ Manor to wrestle the outcome from Glenfarne/Kilty’s grasp.

Two pointed frees from Aaron Hickey in the space of a minute reduced the deficit to three with a little less than a quarter of the game remaining.

There was never any sign of panic among the Glenfarne players and although they were unable to extend their lead, they held on comfortably with an injury time free from Aaron Hickey the only addition to the scoreline before the final whistle signalled the start of the Glenfarne/Kiltyclogher celebrations.

Main Man: Barry McDermott, Dermot Harkin and Niall Clancy were all instrumental for Glenfarne/Kiltyclogher but it is impossible to overlook the role played by Fergal Clancy who led by example from start to finish.

Talking Point: It was a day to remember for all associated with Glenfarne/Kilty as they ended a 27 year wait for silverware and brought smiles back to faces that endured a difficulty 12 months.

Turning Point: Glenfarne asserted their dominance on the game in the closing stages of the first half with three unanswered points and from there the confidence in the Glenfarne players grew visibly.

Ref Watch: A first half penalty appeal was waved away after what appeared to be a foul on Ronan Flynn but overall Michael McGirl was on top of all matters and made good use of the advantage rule on a number of occasions.

Highlight: Leading by three points in the final 10 minutes Glenfarne/Kilty were resolute, dogged, committed and fiercely determined in the closing stages. It was a game that clearly meant a lot to the Glenfarne players and that late showing demonstrated why they deservedly claimed victorious.

Lowlight: As an occasion, Saturday's final proved to be an unforgettable day for all associated with Glenfarne/Kiltyclogher but unfortunately the quality of football on offer wasn't always as high as the wonderful atmosphere deserved.