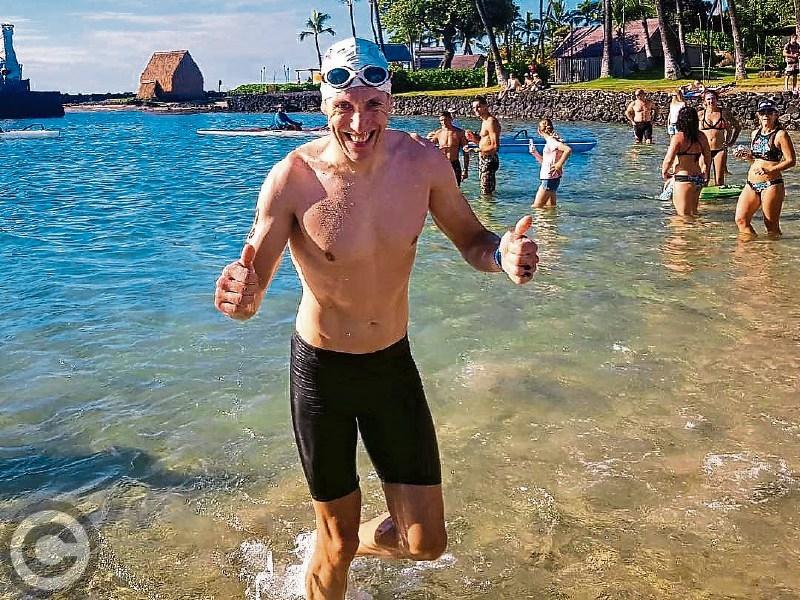 Thumbs up from Donnacha Holmes after finishing the 3.9km Ho’ala Swim last Saturday evening as a warm-up for his manin event next Saturday - the Ironman World Championships

Donnacha Holmes will truly join an elite band of sports people when the Carrick-on-Shannon native competes in one of the world's toughest endurance events - the Ironman World Championships in Hawaii!

Hawaii – a far off set of North Pacific Islands, as far away as you can actually go from Ireland before doubling back on yourself – plays host to the Ironman World Championships and for the first time ever a Leitrim athlete will grace the waters and roads of the infamous island event.

While most of us will be well wrapped up in our beds in the early hours of Saturday night/ Sunday morning, Donnacha reaches the pinnacle of triathlon competition having qualified for the event at Ironman Maryland in October with a win in his age group and taking fifth overall in a field of nearly 1500 competitors.

Holmes has had a rollercoaster past three years with highs of sub 9.10 hours Ironmans to lows of lying on the side of the road atop Sliabh an Iarainn after a serious training bike crash which left him with broken bones and dented hopes of achieving a long standing ambition of competing at the Ironman World Championships.

The Lough Key Tri Club man has fought back from a career threatening injury to be stronger and more focused than ever before and now sees himself line up at 6pm Irish time on Saturday evening to take on the daunting course renowned for searing heat and strong island winds.

This year’s event is the 40th edition of the race with participants having qualified for the World Championships from a range of Ironman events that have taken place all over the world with top finishers in each of the races and age groups given the chance to race all together and to be crowned Ironman world champion, both an overall basis but also a coveted Age Group Championship basis.

There are a number of Irish qualifiers taking part with most having made the two day trek to Hawaii up to two weeks in advance of the race to acclimatise to the hot temperatures and winds.

Donnacha continued his race prep in Hawaii on Saturday evening taking part in the 3.9km Ho’ala Swim race finishing in a time of 1hr 8 mins and well up the field which included some of the top competitors who will take part in this week-ends race.

Speaking from Hawaii on Friday last, Holmes was happy with how things have gone so far while over there but was still struggling a little with the heat over there – speaking about the bike & run route he said “It’s a fast smooth course with good rolling hills and as long as the wind doesn’t become much heavier it’ll be ok.

“The run though is just a different story. It takes so much effort to run, what might be 40 secs per km faster at home. It’s crazy!”

Donnacha has began to find his run feet in more recent days though and is confident of a good performance, lapping up the atmosphere though mingling with the large number of professional athletes in the field and states it is by far the ‘friendliest’ atmosphere of any Ironman race he has competed in so far.

Donnacha also thanked the numerous local businesses and people who have helped him with sponsorship in recent months to make this mammoth trip possible in the first place.

Donnacha’s race kicks off at 6pm Irish time on Saturday evening and can be viewed live on the ‘Ironman Now’ Facebook page with full commentary and insight into the race throughout.

SO WHAT EXACTLY IS AN IRONMAN?

The inaugural Hawaiian Ironman Triathlon was in 1977 as a way to challenge athletes who had seen success at endurance swim, running and biathlon events. Honolulu-based Navy couple Judy and John Collins proposed combining the three toughest endurance races in Hawaii (the 3.9km Waikiki Roughwater Swim, 180km of the Around-O'ahu Bike Race and the 42km Honolulu Marathon) into one event.

In 1978, 15 people came to Waikiki to take on the Ironman challenge. Prior to racing, each received three sheets of paper with a few rules and a course description. The last page read: "Swim 3.9km! Bike 180km! Run 42km! Brag for the rest of your life!". In 1981, the race moved from the tranquil shores of Waikiki to the barren lava fields of Kona on the Big Island of Hawaii. Along the Kona Coast, black lava rock dominates the panorama, and athletes battle the "hoomumuku" crosswinds of 70kph, 35 deg temperatures and a scorching sun.

The Ironman World Championship centres on the dedication and courage exhibited by participants who demonstrate the Ironman mantra that ‘anything is possible’. Over 2,000 athletes will embark on a journey that presents the ultimate test of body, mind and spirit to earn the title of Ironman.