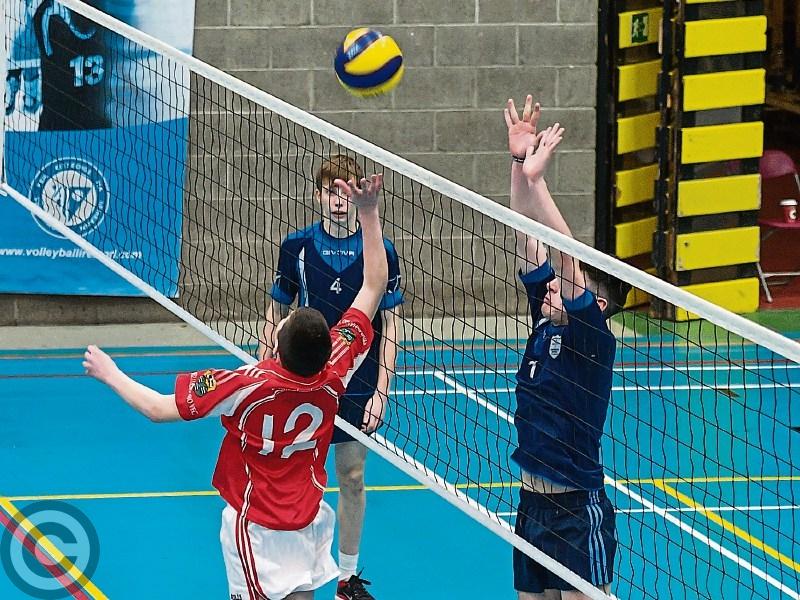 In one of the earliest starts ever for Cadette A, Drumshanbo acquitted themselves well in Athlone last Tuesday, with two wins and a very exciting loss to the hugely ambitious St. Flannan's Ennis.

Drumshanbo had a great start to their record 31st consecutive year in cadette A volleyball. Newcomer Evan Foley served them 5-1 ahead while Dylan Easterbrook served 6 in a row to finish off the set. Elphin will be less than happy with their serving.

However, at 20-10 there was a brilliant rally as Elphin were at their brilliant defensive best as they saved 3 tremendous spikes from Emmett Moran. Cathal McGourty block their counter attack. Arik Oberwan’s 5 serves in a row opened a huge gap.

McGourty hit 9 serves in to put Drumshanbo 12-4 ahead in the 2nd set and Dylan Easterbrook again finished it off with Ronan Moran setting up his namesake Emmett for winners. Seán Moran also made an error-free cadette debut as a libero

This was a match worthy of a final. Although Drumshanbo have five youth internationals, only two are underage cadette. In contrast, Ennis had four internationals, all from their good cadette a team of last year.

Ennis had spectacular hitters and servers but, were matched by Drumshanbo, at the start. Emmett Moran blocked, as did McGourty who also aced Drumshanbo 10-7 ahead. Young Radwick Oberwan combined with Easterbook for a spectacular spike winner. Evan Foley spiked a winner from the back. Then, this still newly formed Drumshanbo, under service pressure, helped Ennis with many errors.

Learning fast, Drumshanbo led again in the second set 5-1 and later 12-9 and were level until 14. Then Ennis got one good run and took an 18-14 lead. This time Drumshanbo, helped by the introduction of Ronan Moran, came back, and Ennis crawled to victory, winning only one point on their own serve.

Drumshanbo missed only one serve in the set. So ended almost 12 consecutive months of wins in the 3 “A” competition. A proud record for the school.

Drumshanbo had no problem beating last year’s Junior B winners. Ciarán McMurrough became the first of his class to play for the school serving five in a row in the first set. Conor Flood’s 4, followed by Brendan Gunning’s 8 serves in a row in the second set, opened up a huge gap early.