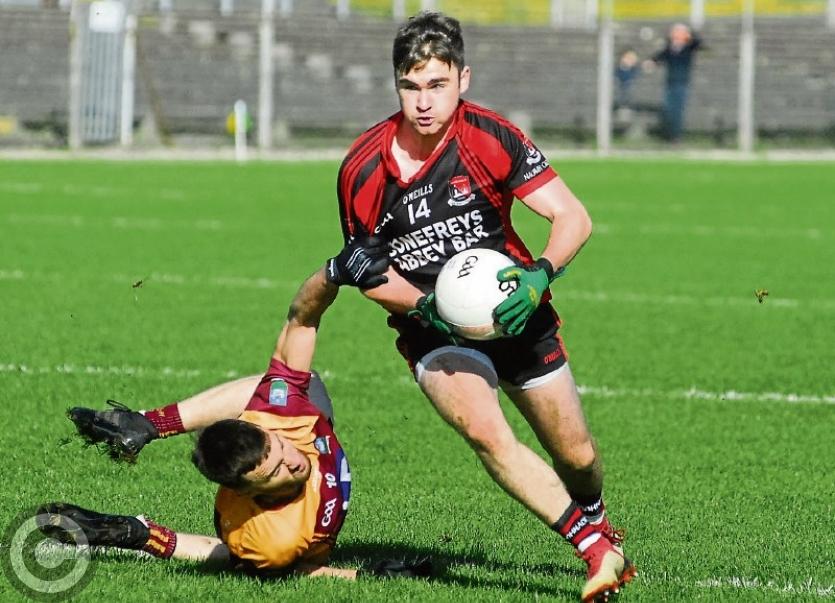 Fenagh's Ryan O'Rourke is dragged to the ground by Eoin Gill, which resulted in a black card for the Annaduff player. Photo by Willie Donnellan

Annaduff and Fenagh will meet again after a dramatic and pulsating finale to last Sunday's Smiths Monumentals Intermediate Championship failed to produce a winner.

While the final moments may have had supporters of both sides on the edge of their seats, this was for the large part a final that failed to live up to expectations.

Annaduff were incredibly well organised, as would have been expected, and when it mattered most, they struck two brilliant points in injury time with Ronan McCormack and Sean McNabola (free) both levelling matters.

Fenagh went into the final as most pundits favourite but were let down by wayward shooting. Ryan O'Rourke, who has been outstanding all year, won't need any reminding that he will need to be better from placed balls in the replay.

Ryan's cousin Riordan O'Rourke opened the scoring in the second minute, converting a free after a foul on Ryan but that was cancelled out by a Kenny Cox point from distance after a strong burst forward from Sean McNabola.

A seventh minute free from Ryan O'Rourke edged Fenagh back in front and Annaduff were dealt a further blow when Eoin Gill was shown a black card after he dragged down Ryan O'Rourke.

Another Ryan O'Rourke free gave his side a two point advantage but just when it seemed as though the Fenagh men would push on, they were to be frustrated by an Annaduff side that proved to be very difficult to penetrate and were looking dangerous on the counter-attack.

Having seen several promising attacks come to nothing Sean Duignan reduced the deficit to the bare minimum when he converted an 18th minute free.

Moments later Fenagh goalkeeper Paul Gill had to be on full alert to deal with a dangerous, dipping shot from Dillon Keane while at the other end Fenagh were having real difficulty adding to their tally with Ryan O'Rourke seeing two successive frees sail wide.

While they may have been having difficulty getting their attack to hit top gear, Fenagh were working very well in all other areas of the pitch as typified by a wonderful interception from Martin Doonan to intercept a pass for Alan Glancy which would have spelled serious danger for Fenagh had it been successful.

With two minutes of the half remaining Annaduff levelled matters when Kenny Cox converted a free after Alan Glancy was fouled.

With the clock on the verge of entering injury time Annaduff launched a devastating counter-attack that ultimately led to the game's only goal.

Fenagh had enjoyed a prolonged spell of possession but had failed to trouble Annaduff and when the ball was intercepted by Ronan McCormack the midfielder launched a huge delivery which caught Fenagh cold. Sean McNabola was in behind the defence and through on goal but his footing escaped him at the crucial moment.

However, Fenagh's attempted clearance fell kindly for Alan Glancy who raced through on goal before dispatching his shot, soccer style, through the legs of Paul Gill.

Annaduff extended their lead within two minutes of the restart when McNabola converted another free to give his side a 1-4 to 0-3 advantage but Fenagh hit back quickly with Mark Keegan registering their first point from play.

Ryan O'Rourke converted another free after Riordan was fouled and substitute Jarlath Scollan then pointed after a patient build-up to leave a point between the sides.

Annaduff were happy to sit deep and attack when the opportunity arose and Sean McNabola duly hit back with a pointed free to put Annaduff two to the good.

As the game entered its final quarter, Fenagh enjoyed a purple patch that seemed as though it would be enough to take them to glory.

Two pointed frees from Ryan O'Rourke and a fine point from Sean Keegan after positive work from Jack Gilheany, Mark Keegan and Tony Sims edged Fenagh back in front.

Another Ryan O'Rourke free was cancelled out by a McNabola free but Fenagh were left to rue a series of missed chances before Ronan McCormack struck brilliantly in injury time to level matters.

A minute later Fenagh were back in front after a brilliant score, under huge pressure, from Riordan O'Rourke which was greeted by a huge cheer from the Fenagh fans who thought their side had done enough to secure the title.

In the fourth minute of injury time Annaduff were awarded a free 46 metres out which was then brought in 10 metres as a result of the Fenagh protests. Just when clear and calm heads were needed Annaduff almost imploded as a quick free went horribly wrong and possession was lost.

Fortunately for Annaduff there was to be one more chance when they were awarded another free and showing incredible calmness Sean McNabola expertly curled the free over the bar to ensure the sides will have to meet again.

Main Man: Nigel Cox, Dillon Keane, Ronan McCormack and Sean McNabola were to the fore for Annaduff while Mark Keegan, Martin Doonan, Ryan and Riordan O'Rourke were all very influential for Fenagh St Caillin's with midfielder Jack Gilheany getting the nod for his overall contribution.

Talking Point: The contest may have failed to live up to expectations but the dramatic closing stages will be talked about for some time to come.

Turning Point: Alan Glancy's goal at the end of the first half, Fenagh's burst midway through the second half and the dramatic  injury time could all have been turning points but instead the sides will meet again.

Ref Watch: Kevin Mallon issued Eoin Gill with as blatant a black card as you could see for dragging down Ryan O'Rourke. Overall it was a very stop start game but it is hard to point the finger of blame at the referee.

Highlight: Ronan McCormack's point in the second minute of injury time was a score to savour. With the outside of his left boot McCormack made a perfect connection with the ball and it sailed over the bar for as stylish a score as you could hope to see.

Lowlight: Fenagh, widely praised in recent years for their free flowing attacking football weren't at their best and incredibly failed to score from play during the opening half.