Aughawillan Super sub Sean Flanagan lives up to the tag 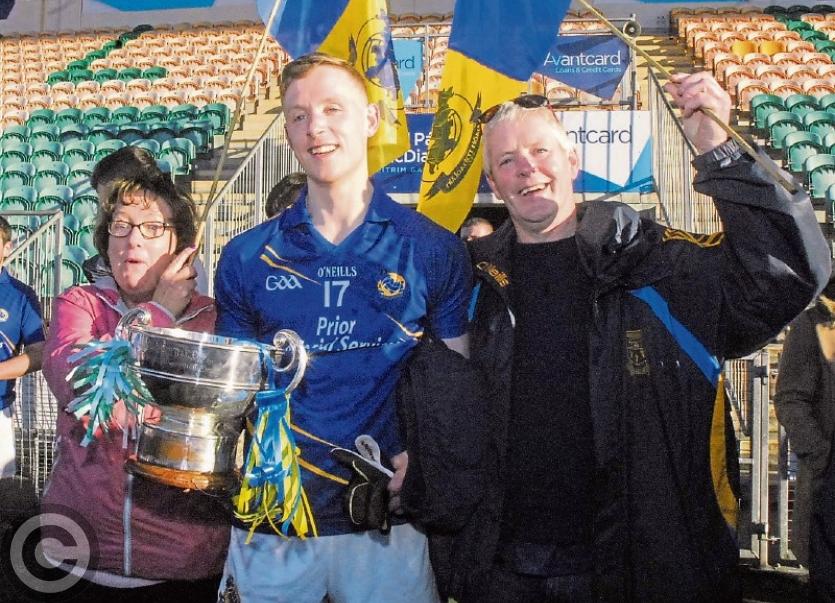 Sean Flanagan pictured with his parents Kathy and Martin and the Fenagh Cup. Photo by Willie Donnellan

It says a lot about the team spirit within the Aughawillan camp and the respect the players have for their manager that when speaking after last Sunday's Senior Championship Final, substitute Sean Flanagan acknowledged omitting him from the starting team was the correct decision!

“It is a disappointment for any player but I can see where the management are coming from,” was Sean's initial reaction when discussing last Sunday's final and the telling contribution he made when introduced from the substitute's bench in the 12th minute of the second half when his team still trailed by three points.

Sean revealed that an injury picked up in the quarter final win over Melvin Gaels meant he would have struggled to play the full game but cometh the hour, cometh the man and when called into the action he more than played his part.

“ I had picked up a knock in the quarter final and I probably wouldn’t have lasted the full game. I was just glad to be able to make an impact when I did come on.”

Having been sprung from the bench Sean made a telling contribution as he scored an excellent point and caused panic in the Mohill defence whenever he was in possession.

Unsurprisingly Sean revealed his time on the pitch was considerably more enjoyable than watching from the sidelines.

“I was happy enough. Everything went fairly well, the lads gave me good ball and we got good scores off the lads,” Sean said modestly when asked about his own impact.

“I enjoyed it a bit more when I was in there! I never really enjoy being on the bench but it was great to get on.”

Incredibly Mohill only scored twice in the second half and Sean was quick to pay tribute to the defence and the discipline with which the team tackled.

“Fergal was brilliant at full-back and all the lads tackled well and didn’t give away silly frees like we did in the first half. I think that was really the difference, the pressure we put on and then we hit them on the counter.”

As the game drew towards its end it was clear from the comfort of the stands that Aughawillan were growing in strength and belief and Sean revealed that feeling was also palpable on the pitch.

“It felt like that on the field! Gary and Mark, they still had the legs in the last five minutes and they drove the team on.”

While Aughawillan are left to reflect on a truly incredible victory, Sean was quick to spare a thought for the defeated Mohill team.

“They looked a small bit rattled and they hit the post and they were a bit unlucky.

“I think that was one of the turning points - that would have levelled it but then we went up the pitch and scored to put two in it.

“When we went two ahead that was it, we felt like it was ours.”

Another reason the final moments were so dramatic was that the prospect of a replay was not one that Aughawillan were relishing with Sean joking, “Definitely not, I don’t know how my hamstring would have been next weekend.

“I’m just delighted to get it done, it’s brilliant.”

With three senior championship medals to his name, Sean revealed this year's triumph is the sweetest he has been part of.

Having defeated St Mary's Kiltoghert by a point in 2014 and Glencar/Manorhamilton by the same margin two years later, Sean acknowledged this latest success is the best to date.

“It feels like the best one out of the three because we were the biggest underdogs of any final we have ever been in.”