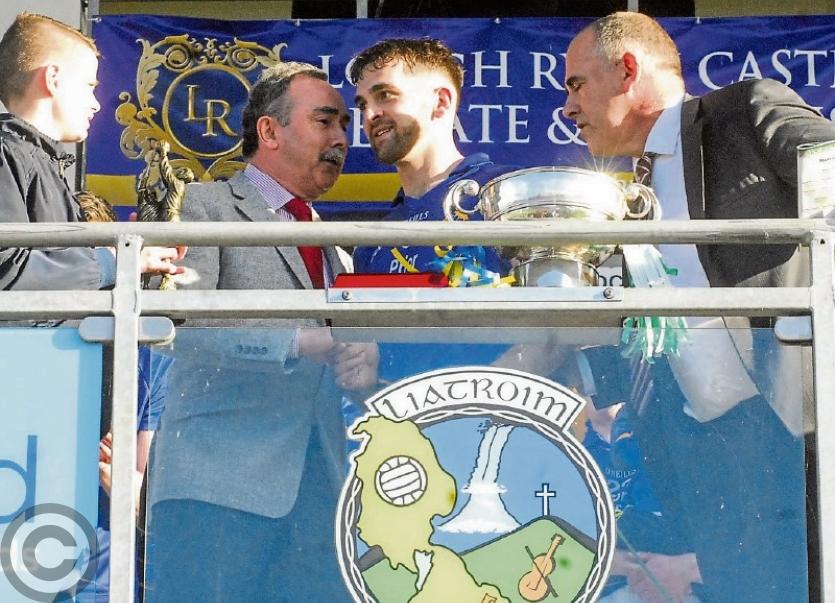 Gary Plunkett is congratulated by man of the match sponsor Gabriel Cronin. Photo by Willie Donnellan

Reflecting on the game Gary conceded it didn't look great for his side when they trailed by four points but typical of Aughawillan the belief they possess in themselves and each other meant there was no fear of them throwing in the towel.

“During the game when we were four points down it wasn’t looking like it but we got the run of play and pulled through and came out on the right side of it.”

The only goal of the game arrived in the closing stages of the first half meaning Mohill trailed by four points but there was a renewed belief among the Aughawillan players in the second half.

Reflecting on the goal Gary recalled, “The goal was unfortunate. I don’t know if Colly (Colin Maguire) didn’t see it but we knew were still in the game.”

The Aughawillan players arrived out on to the pitch very early in readiness for the second half to get underway with Gary insisting he and his team mates knew Aughawillan would enjoy a period of dominance and it was critically important they made it count.

“We were matching them all around the field so we knew we were still in it. We just said we are going to get our purple patch and kick on. We were able to pull back the points and then pull ahead.”

Commenting on the Aughawillan 'never say die' mentality, Gary said he and his team mates were determined not to let one another down.

“It’s our third final in five years. We are well used to pulling back leads, it is bred into us. We weren’t going to let each other down and we fought to the end and it worked for us in the end.

Looking for decisive moments in the game Gary agreed the introduction of Sean Flanagan was a huge moment for Aughawillan and he was quick to pay tribute to the contribution made by the substitute.

“Sean was probably unfortunate not to start. He has been a big player for us and he definitely changed the game for us.

“He’s a big physical man and well able to win his own ball and he got the equalising point and I think that was the difference in the game and we kicked on from that.”

Having fought their way back into contention Aughawillan took the lead with a minute remaining courtesy of a point scored by Gary. Reflecting on that score Gary insisted the belief within his team was such that having taken the lead he was certain his would be the winning team.

“I suppose we just got the lead at the right time. The time was on our side, there was only a few minutes left and we knew we could hold out.”

Having successfully regained the Fenagh Cup, Aughawillan will now represent Leitrim in the Connacht Club Championship and Gary is already looking forward to the provincial competition.

“It’s one of those things you don’t look at until the final is over but we have been there before and we were disappointed a couple of years but we want to do Leitrim proud.

“Mohill did Leitrim proud last year and we want to keep that up. It’s a different grade of football but that is where you want to be.”