When the going gets tough, Aughawillan get going 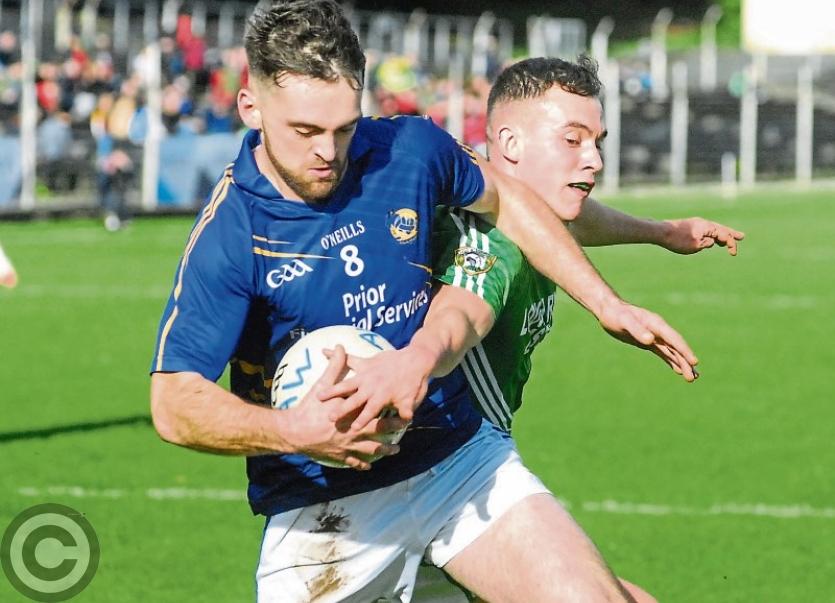 Man of the Match Gary Plunkett holds off Mohill's James Mitchell on his way to scoring a point during last Sunday's Connacht Gold Senior Championship Final. Photo by Willie Donnellan

When is a shock not a shock? When it is Aughawillan doing what Aughawillan do best - upsetting the odds and making off with the Fenagh Cup and the title of Leitrim Senior Football Champions for yet another year.

Producing a fantastic blend of outstanding football, self belief and a dogged refusal to bend the knee, Aughawillan upset the pre-match predictions to dethrone reigning champions Mohill and lift the Fenagh Cup for the third time in five seasons.

With the title on the line in the last five minutes, you could sense an air of inevitability that the warriors in Blue & Gold would find a way to bring a wonderfully talented Mohill team to heel and that is exactly what they did!

So impressive were Aughawillan in those final ten minutes that you got the sense that even Mohill supporters were resigned to their fate long before the final whistle.

But it is strange how the mind plays tricks - talk to any neutral after Sunday’s immensely entertaining contest and you got the sense that Aughawillan won far more convincingly than the two point final margin suggests.

And it’s strange when you look at the bare facts that the new champions only drew level with Mohill less than five minutes before the final whistle.

Stranger still that there was only a point between the teams as the game ticked over the 60 minute mark literally seconds after Mohill’s Shane Quinn saw his attempt for an equaliser cannon to safety off the post.

Strangest of all is that for 50 minutes, Mohill had dealt with everything Aughawillan threw at them with the calm assurance of champions elect, a team who seemingly had the answer to every question Aughawillan asked of them.

But the closing ten minutes is almost a sacred time for Aughawillan - a time when they are at their very best and Mohill knew it too. The assurance that marked their play earlier in the game deserted Mohill as Aughawillan players seemed to plug into some incredible new power source.

The source of their power? Aughawillan’s self-belief and a knowledge that when the game is on the line, there is nobody, literally nobody, better at doing the right things at the right time and doing them enough times to win the day.

If Aughawillan’s will to win can be captured in one person, Mark Plunkett must surely be that person as, for the third time in five years, the youngster - and he is still a young man of 21 - has delivered the winning score for Aughawillan in County Final. For like his teammates, Plunkett stood tallest when the need was greatest!

Yet for all our hymns to Aughawillan’s brilliance, it wouldn’t have taken much for Mohill to carry the day. A block on Ronan Kennedy by Fergal McTague and Shane Quinn hitting the post in the final seconds summed up their final ten minutes but for a long time, Mohill looked like the imperious Emperors of old, swatting away anything Aughawillan threw at them.

A poacher’s goal from Ronan Gordon, wonderful play from Domhnaill Flynn, the tireless Shane Quinn and Caillin Canning and defiant defensive work from Alan Armstrong and Ciaran Kennedy had Mohill in the right position to win this game.

Of course, there will be regrets - did Mohill err in taking off Keith Keegan while they failed to make use of the one advantage everyone believed they possessed that Aughawillan simply couldn’t match - their strength in depth.

For if strength of the bench is measured by the impact of those subs, then Aughawillan have riches in abundance such was the impact Sean Flanagan had on this game, the final nail in Mohill’s coffin.

Flanagan increased the pressure on the Mohill defence and in Gary and Mark Plunkett, Aughawillan had two superb match winners, Gary deservedly Man of the Match with an immense display.

Mohill weren’t that far away and even right up to the final whistle, they were still creating chances but the sangfroid that marked their scoring attempts early in the game left them and suddenly it was Aughawillan who were in command.

And at the end of the day that was the biggest difference between the teams - both evenly matched, both intensely committed, both willing to give everything but when the pressure was at its greatest, Aughawillan believed and it showed - on the field and on the scoreboard.

Finally, credit both teams for producing an excellent game of football. Neither Tommy McCormack or Sean Kennedy deviated from their attacking principles and we got a game that was physical, a game that married great attacking moves with wonderful defensive play and some incredible fielding in the middle of the park.

After bemoaning the quality in lots of matches this year, it was refreshing to see two teams attack the game all out and play the game in the spirit intended.

l See www.leitrimobserver.ie for a score by score report of last Sunday's Final.