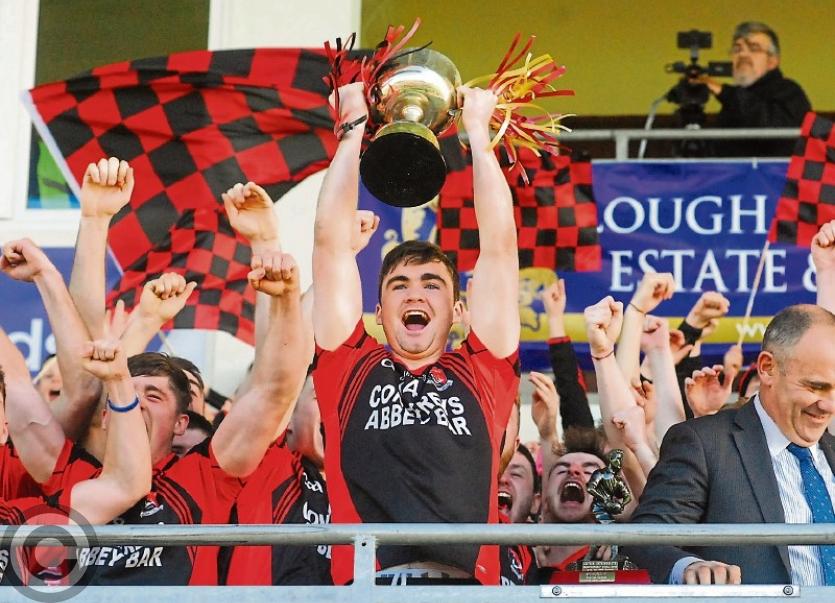 The drawn game may have failed to reach the heights many had hoped but last Sunday's encounter more than made up for it as both sides produced a contest to remember.

Some wonderful shooting, dogged and resolute defending, excellent saves and clinical goals were features of what proved to be a compelling encounter.

Ultimately it was the three second half goals scored by Fenagh St Caillin's that proved decisive with captain Ryan O'Rourke finding the net twice and Leitrim captain Donal Wrynn scoring the crucial third. Paul Gill was outstanding between the sticks for Fenagh, Richard Heaney was solid at full-back while wing backs Sean and Mark Keegan were as reliable in defence as they instrumental in attack.

The midfield duo of Jack Gilheany and Donal Wrynn helped give Fenagh a platform from which they could build but the Annaduff kickouts, particularly in the opening half made life easier for them than would have been expected.

For Annaduff Hugh Moylan and Dillon Keane impressed in defence with Nigel Cox once again making a telling contribution when introduced as a second half substitute.

Midfielder Ronan McCormack did well with the ball that came his way while up front Eoin Gill, Conor Reynolds and Alan Glancy caused plenty of problems and the shooting accuracy of Kenny Cox and Sean McNabola ensured a gripping encounter.

From the throw-in Annaduff won possession with the ball worked to Kenny Cox who got the better of Conor Dwyer and Richard Heaney before slotting the ball over the bar. Fenagh quickly put that score behind them and produced an excellent passing move but the attack resulted only in Conor Dwyer wide.

The resulting kick-out saw Donal Wrynn win possession before releasing Riordan O'Rourke who found himself with a clear view of goal. However, his shot was slightly off target, hitting side-netting.

A Ryan O'Rourke free saw Fenagh register their first score of the day but Annaduff hit back impressively. After Paul Gill did well to deny Frank McNabola the ball fell kindly for Alan Glancy who pointed to edge Annaduff back in front.

Throughout the day whenever Fenagh needed inspiration Ryan O'Rourke was on hand to provide it and a wonderful long range point was followed by a free to reduce the deficit to the minimum.

The nip and tuck nature of the game saw Connor Reynolds go close for Annaduff before Ronan McCormack pointed to give his side a two point lead.

Ryan O'Rourke replied with a pointed free for Fenagh before Paul Gill was called on to make a second crucial intervention this time standing tall and strong to deny Reynolds who seemed destined to goal.

The ball then broke to Sean McNabola who pointed but it was Fenagh who finished the half the stronger with three points from play from Ryan O'Rourke to give Fenagh a 0-7 to 0-6 interval lead.

Fenagh's Shane Doonan struck for the first point of the second half, barely a minute after the restart and less than a minute later they had pounced for the game's opening goal, scored by Ryan O'Rourke.

Two Sean McNabola pointed frees brought Annaduff right back into contention and they arguably should have drawn level when Eoin Gill found himself through on goal but his shot succeeded only in hitting the side-netting.

Mark Keegan responded with a fine point for Fenagh but Annaduff were on the march and an excellent score from Gavin O'Brien shortly after his introduction illustrated the game was still very much alive.

However, just when they appeared to be under heavy pressure Fenagh struck for their second goal and the fortuitous nature of Ryan O'Rourke's second goal suggested perhaps Fenagh's name was on the cup.

With a quarter of the game remaining Annaduff still looked as determined as ever and two further Sean McNabola points (one free) reduced the Fenagh lead to four points.

Ultimately that proved to be as close as Annaduff would get as with 11 minutes left on the clock Fenagh pounced for their third goal. Ryan O'Rourke and Shane Doonan were heavily involved in the build-up but it was the clever exchange of passes between Donal Wrynn and Mark Keegan that undid the Annaduff defence and from close range Wrynn slotted the ball past Annaduff goalkeeper Jim McCormack.

Annaduff replied with a Sean McNabola free which was soon cancelled out by a Ryan O'Rourke free.

Ultimately, this was to be Fenagh's day and it was fitting that it was their talisman, Ryan O'Rourke, who completed the afternoon's scoring with two late points to put the gloss on a hard fought but deserved victory.

Main Man: Ryan O'Rourke scored six points in the drawn game but will have been frustrated by a number of wides. However, last Sunday he more than made up for those misses as he kicked an incredible 2-9.

Talking Point: It is difficult to predict how a replay will unfold but just 20 seconds after the ball was thrown-in  a clear signal of intent was laid down. Both sides contributed to a thoroughly enjoyable game but there can only be one winner and Fenagh deservedly took the honours but expect Annaduff to be back with a vengeance next year.

Turning Point: Key for Fenagh was the crucial second goal arriving at a time when Annaduff were building up a head of steam. Riordan O'Rourke's  shot was blocked but the ball fell kindly for Jarlath Scollan who squared to Ryan O'Rourke who dispatched the ball to the goal.

Ref Watch: A job well done by Eamon O'Grady who had a relatively trouble free afternoon.

Highlight: There may have been an element of luck attached to his second goal but there was nothing lucky about Ryan O'Rourke's first goal. Donal  Wrynn played a perfectly timed pass into the path of Jack Gilheany who was bombing forward unopposed. Gilheany then released Ryan O'Rourke who dispatched his shot low and hard into the corner of the Annaduff goal for an excellent and crucial goal.

Lowlight: After a dour and frustrating drawn game, the replay proved to be an enthralling affair with no real lowlights.