It's great to get over the line says Paul Gill 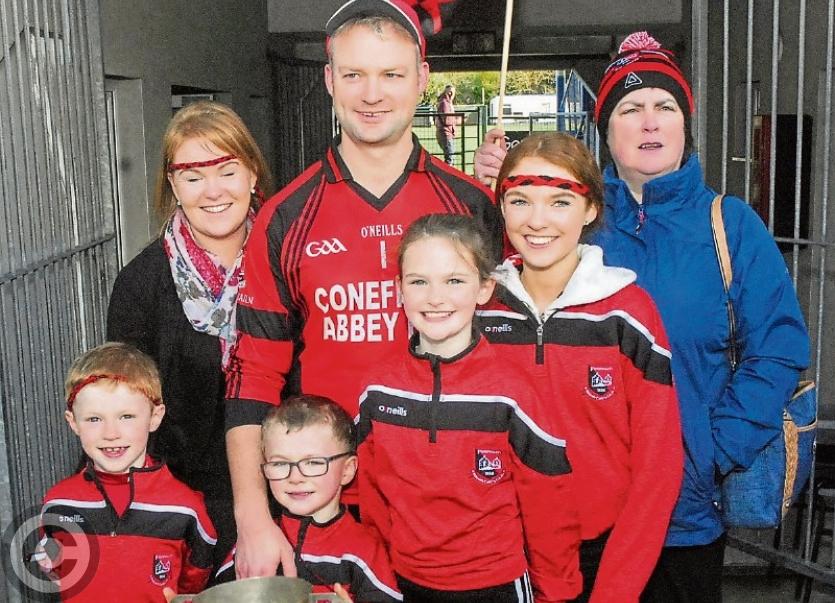 Paul Gill pictured with his wife Tracey, children Eabha, Kayla, Adam and Conor and sister Liz and the Frank Reynolds Cup after Fenagh's victory in the IFC Final replay. Photo by Willie Donnellan

One of the more experienced members of the Fenagh team, the netminder proved his worth to his team in style last Sunday.

The joy on the faces of all associated with Fenagh gave an indication of what victory meant to the club with Paul relieved to have been able to help guide his side to victory against an Annaduff side he clearly has a lot of respect for.

“It’s great to get over the line. Annaduff in fairness to them threw everything at us in the first half. We just dug deep in the first half and got into the dressing room at half time and we were lucky enough I suppose to get out of jail really.”

Twice in the first half Paul made crucial interventions. In the opening stages, he was off his line quickly to smother the ball at the feet of Eoin Gill while later in the half he stood firm to make an excellent save to keep out Connor Reynolds' effort.

Reflecting on those key stops, Paul was reluctant to take too much praise saying “They had a couple of chances. If they got a goal early on it would have put us under a lot more pressure. They got through and in fairness they probably should have been putting them away but it gave me a chance to put my body in front of it.”

The fact that there are so many young players within the Fenagh ranks and that only Paul and two other players had previously contested a final illustrates the lack of experience within the team but Paul felt the team benefited greatly from the drawn encounter.

“This is the first time we have been in a final since 2003 and there is probably only three of us who would have experienced that day, the rest of them it would have been new to them. We still had a good day the last day but we pushed on today in the second half today.”

Commenting on how he and his team mates managed to forget about the hype and excitement surrounding the replay Paul stated once the players crossed the white line they treated it like any other game and let those in the stand worry about the everything else.

“I probably felt a little bit more pressure in the first game than today, the experience of last week probably stood to us today.”

“It is great to be playing football in November and we are delighted to be in it.”