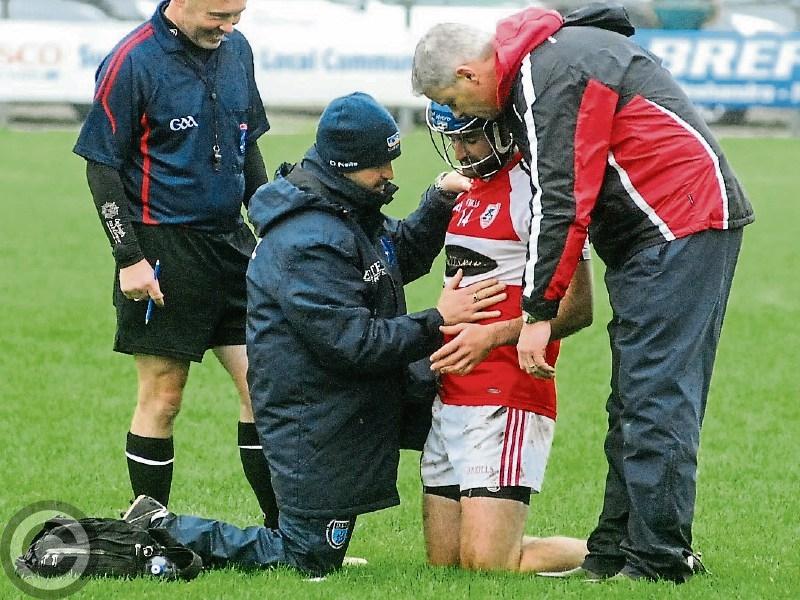 After seeing his side claim a hard fought win over Cluainin Iomaint last Saturday in Ballinamore, Carrick Hurling selector Donal O'Grady paid tribute to his troops who prevailed in difficult conditions.

“We expected nothing less from Manorhamilton. They are a tough team, they never let you get away with the ball too easily, there is always a hit, a touch or a flick to stop your progress,” was Donal's initial assessment as he reflected on the contest.

“We knew it was going to be tough. The weather conditions at the start were wet and it was heavy underfoot.”

As well as congratulating his own players and commiserating with the Manorhamilton team, Donal was eager to recognise the contribution of team manager Olcan Conway who left Ballinamore immediately after the full-time whistle so that he could cast his eye over the Sligo Championship Final.

“I would like to pay tribute to the leader of the group Olcan Conway. He’s the one that drives the whole thing, he’s the glue that holds the whole lot together,” added Donal.

Casting his mind back to the final, Donal agreed the contribution of 17-year-old Stephen Goldrick was decisive and he was quick to pay tribute to the man of the match.

“We went in at half-time with a two point lead and our new man Stephen Goldrick ended with two goals and a point which was the difference between the sides.

“It is fantastic for him, he’s a young starlet and he took his two chances brilliantly. He has been with us since he was under eight and now to see him play in the senior ranks and get man of the match in the final with 2-1 is something special.

“He has a huge future ahead of him as a hurler.”

“I’d like to pay tribute to the whole bunch of lads. We have a panel of over 30 and guys were putting in the hard work in Tubber on Tuesday and Wednesday nights in preparation for this. Fellas were putting their lives on hold, putting their football commitments on hold.”

While the spectacle may not have been what most neutrals or in fact either of the competing clubs would have been hoping for Donal admitted it was a particularly satisfying victory.

“It’s all about the win. We knew it was going to be tough, we never get anything easy off Manorhamilton and that was what we expected. It’s all about the win, you don’t want to lose a game like that. To come out the right side of it is very satisfying and we will enjoy this one.”

Attention for the Carrick now switches to next Monday's Connacht Junior Club Championship encounter with Sligo champions in Avantcard Pairc Sean Mac Diarmada and Donal was quick to offer a word of caution to his players insisting “We are going to have to see a vast improvement from ourselves that day.”