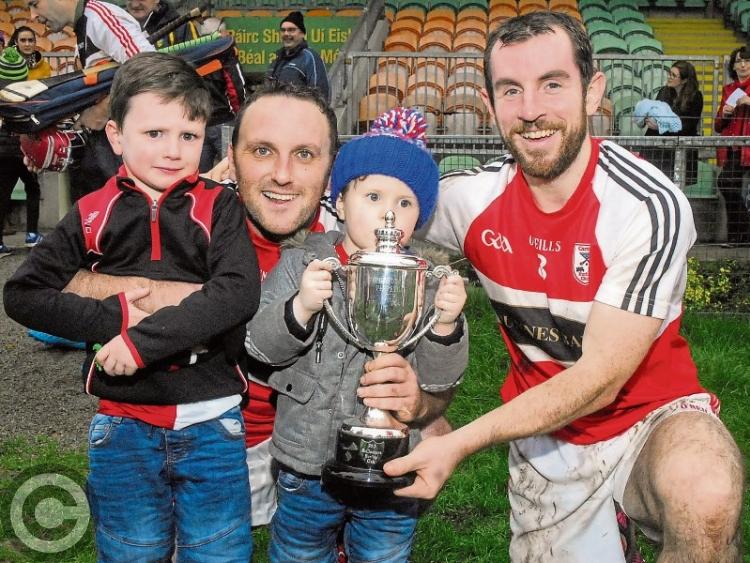 It may not have been a game to warm the heart of hurling purists but as Carrick captain James acknowledged after the game, last Saturday's Leitrim Hurling Championship was all about winning.

An experienced inter-county hurler with a host of championship medals to his name James's initial, coy assessment of the final when he said - “It was a tough match,” gives an indication of how the game unfolded.

From the comfort of the stand in Pairc Sean Uí hEislin Saturday's final appeared to be a real war of attrition and James' account of proceedings indicate it was a similar feeling for those in the heat of battle on the pitch.

“From the word go there was nothing in it. Stephen Goldrick's goals in the first and second half was probably the difference but there was nothing between the two teams all the way through it but I’m delighted to win it.”

The wintery conditions certainly did the players no favours as the freeflowing hurling the sporting public had become accustomed to during a summer of spellbinding hurling was replaced by a contest with no quarter asked or given.

While James agreed it may not have been the greatest advert for the sport he did acknowledge it was a game in which both sides were more focused on winning than producing an exhibition of freeflowing hurling.

“It wasn’t a great game skill-wise and I’d say Manorhamilton are thinking the same. I’d say they were hoping for a more open game.”

The strong wind, slippery underfoot conditions and the cold October air didn't help either set of players with James saying there was no option but to get on with it.

“With the conditions it wasn’t easy for either team to get going and play freeflowing hurling but that’s the way it is.

“There is a lot at stake and all that goes out the window. We’re just delighted to get across the line.”

During his acceptance speech James paid tribute to the work being carried out by the hurlers this year, saying he has found the team to be as committed as any football team in the county and he is now turning his attention to next Monday's Connacht Club encounter with Coolera-Strandhill.

“Calry were knocked out so that is going to be a big change so hopefully we can give that a go.

“It didn’t show it today but everyone has been working hard the last couple of weeks and hopefully we can show it the next day.”