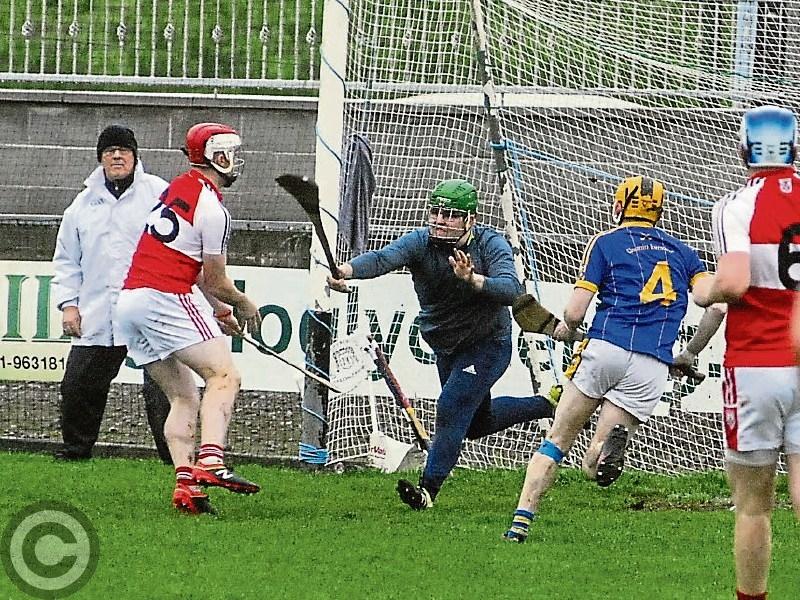 Two goals from Stephen Goldrick were enough to see a lacklustre Carrick-on-Shannon over the line in Saturday's Leitrim Senior Hurling Championship Final against a Cluainin side that will be cursing their own inaccuracy.

In a low scoring but intensely committed decider in Pairc Sheain Ui Eslin, Ballinamore, a goal in each half from 17-year-old Goldrick proved the difference on the scoreboard as Carrick retained their Senior hurling crown.

Going into the game as favourites, Carrick were forced to play second fiddle for long periods to a wonderfully committed Cluainin as their immense appetite for battle, work-rate and ferocious desire saw them boss most of the exchanges, particularly through Karl McDermott, Niall McLoughlin, Kevin Clerkin, Declan Ryan & James O'Brien.

But where the north Leitrim men couldn't match their southern counterparts was in finishing - Goldrick showed nerves of steel to take two goals while their ability to finish under pressure was something Cluainin couldn't match with Clement Cunniffe, Liam & Colm Moreton and keeper Declan Molloy all grabbing vital scores.

Cluainin relied far too heavily on Gavin O'Hagan for their scores, all seven of their scores coming from the marksman, but it was the misses they will have felt the most as they had six missed opportunities from frees over the course of the hour while Declan Molloy made a superb save to deny O'Hagan a goal in the final minute.

Enda Moreton was superb throughout with his power and combative qualities but Carrick were clever in moving Conor Beirne back to defence after the first ten minutes, the Eslin man a formidable defensive presence that Cluainin were unable to break.

Veterans James Glancy & Vinny McDermott stood tall when Carrick needed them most while Kevin McGrath was rock solid but even Carrick supporters will admit it was a performance that lacked their usual verve and passion.

The first half started with a Karl McDermott wide but Gavin O’Hagan edged Cluainin in front from a third minute free. Cluainin’s Niall McLoughlin made a good block on Colm Moreton while Clement Cunniffe put a sideline free wide.

A wild swing from James Glancy resulted in a yellow card for the Carrick centre-back and a successful free from O’Hagan but before the puck-out was taken, pushing led to a Carrick free, dissent saw it moved forward and Cunniffe scored from the halfway line.

Two minutes later, the contest took a major swing in Carrick’s favour - Enda Moreton beat a couple of his own players to a Cluainin attack. He swung the ball across the field to his brother Colm who immediately sent long towards the other brother Liam. The elder Moreton didn’t get his hands on the ball but it did break from Stephen Goldrick who buried the sliothar to the net.

With the teams trading wides, Carrick almost broke through for a second goal after good work from Stephen Goldrick but Liam Moreton blasted high over the bar with just Ethan Clancy to beat.

There wasn’t another score for 10 minutes but a lovely worked move saw Gavin O’Hagan in space for his team’s first score from play. Carrick responded two minutes later with a Declan Molloy free from right beside the stand sideline and inside his own half.

With Cunniffe and Karl McDermott getting a yellow each, the half ended with another O’Hagan free as Carrick led 1-3 to 0-4 at the break.

Cluainin started off with another O'Hagan free to cut the gap to a point but a missed free from the Manorhamilton marksman would prove costly as Carrick's next score was a goal, albeit with a stroke of good fortune, four minutes into the half.

A harmless ball into the corner seemed easy for the defender to clear but the clearance struck the body of Clement Cunniffe. He darted in towards goal before passing across the head of a defender to an unmarked Goldrick who showed keen finishing to bat the ball past Ethan Clancy.

O'Hagan responded with a free a minute later but Carrick hit back with a point from Colm Moreton after good work from Kevin McGrath but he followed up with a wide two minutes later as did Declan Molloy who saw his free battled out.

With no score in the game for a 13 minute spell, all we were left with was wides and the odd yellow card, O’Hagan getting a yellow for flicking out at Molloy as he came out for a free but he then ended the deadlock with ten minutes left from a free.

With the game in the last minute of normal time, Cluainin tried to cut the gap with an O’Hagan 50 yard free. The sliothar rebounded off the post and a Manor shot was blocked but arriving in to gather the clearance, O’Hagan struck a good goal-bound shot only for Molloy to stick out his hurl and make a vital save.

The value of that save was emphasised in added time as Colm Moreton collected a pass from Goldrick to score before Cunniffe converted a free. Moreton didn’t see out the game as he collected two yellow cards in under a minute for his marching orders but it didn’t prevent a Carrick victory.