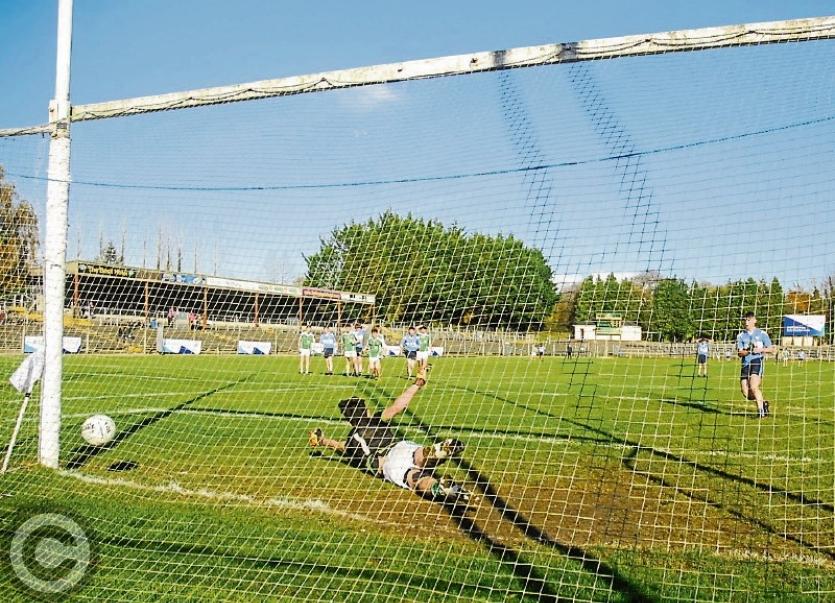 After an intriguing and exciting encounter, the young footballers of Allen Gaels and Mohill must meet again after a dramatic finish to the Westlink U15 Championship 15-a-side Final.

A 12 noon start on a Bank Holiday Sunday is hardly the ideal time for any final but Avantcard Pairc Sean Mac Diarmada hosted a game that took a while to get going but finished in a welter of excitement as both teams missed chances to seal victory.

Allen Gaels will feel both disappointed and relieved as they led this contest nearly all the way to the finish only to get caught within sight of victory. Yet the Drumshanbo men were the first to admit that they were hanging on over the final ten minutes against a charging Mohill who never truly going until the final stages.

Mohill, on the other hand, couldn't break down a resilient and incredibly hard working Gaels defence and it took a slice of luck to get them the goal that earned them the draw in the final analysis.

Allen Gaels set the early tempo and a foul on Radek Oberwan three minutes in saw Ciaran McMorrow convert the free. Almost immediately, a lovely run from Aonghus McCrann saw him tap over a fine point to tie the scores.

The game changed completely in a two minute spell when the Gaels were awarded what looked like, to this writer at least, like a soft penalty. A high ball into the area saw keeper Shane Moran challenge Conor Flood with referee Michael McGirl award a penalty for a challenge that the Gaels didn't dispute. Radek Oberwan stepped up and dispatched the kick in style, just about evading the diving hands of Moran.

Allen Gaels made them pay with Flood and Oberwan, from a 50 yard free, scored huge points to extend the lead to nine points coming up to the break but a Donal Duignan shot that was palmed over the bar and a good point from McCrann saw Allen Gaels lead 2-4 to 0-3 at the halftime break.

With both teams hitting wides, the first score came four minutes in from a Sean Bohan free. Allen Gaels benefited when clear over-carrying was missed in the middle of the park and a long ball in found Liam McGourty for a fine point on nine minutes.

Almost immediately, Shane McKeon got an excellent point restore an eight point lead but the Drumshanbo men were not to score for the remainder of the game with Mohill starting to increase the pressure, Padraig Keane making an important block.

Sean Bohan on 11 minutes and Conor Quinn (free) five minutes later cut the gap to two goals and a great move out of defence was finished by a Conor Macklin point. Allen Gaels had a chance for at least a point when James McGrail intercepted and burst upfield but his shot was well wide.

With ten minutes to go, McCrann pointed after a good run and a minute later, a Quinn free left just a goal in it with nine minutes to play. It seemed all set up for Mohill but Allen Gaels’ heroic defence, including a Liam McGourty block on Conor Quinn, held out.

When the breakthrough did come, it came with a slice of luck after Conor Quinn and Conor Keegan combined to set up a Keegan shot that ricocheted off a defender and fell right into the path of Sean Bohan for a close range tap-in.

That came with barely ten seconds of normal time left - both sides had chances and squandered them with the game heading to a replay.

Main Man: Radek Oberwan was outstanding for Allen Gaels while Jamie McGrail, Padraig Keane and Conor Flood all stood out on the day when the Gaels defence really impressed. For Mohill, Aonghus McCrann, Donal Duignan, Conor Quinn and Sean Lynch were central to keeping their team's hopes alive for another day.

Talking Point: Who will take most from the draw? Mohill rescued the game and Allen Gaels were caught after leading all the way but you sensed that the Drumshanbo men were the most relieved.

Turning Point: Sean Bohan's goal might have rescued a draw but three points in as many minutes from Conor Quinn, Conor Macklin and Aonghus McCrann along with a bad wide for Allen Gaels turned this game around for Mohill.

Ref Watch: Michael McGirl did a lot right but gave a penalty that looked like the wrong call. Gave out a lot of yellow cards too but players kept their discipline and thankfully there were no sendings off.

Highlight: Radek Oberwan scored a magnificent 50 yard free that was top class, a score that would grace any contest.

Lowlight: For a long time in this game, there was a lack of intensity and some poor shots from both teams and the first half didn't produce the sort of entertainment we were hoping for.