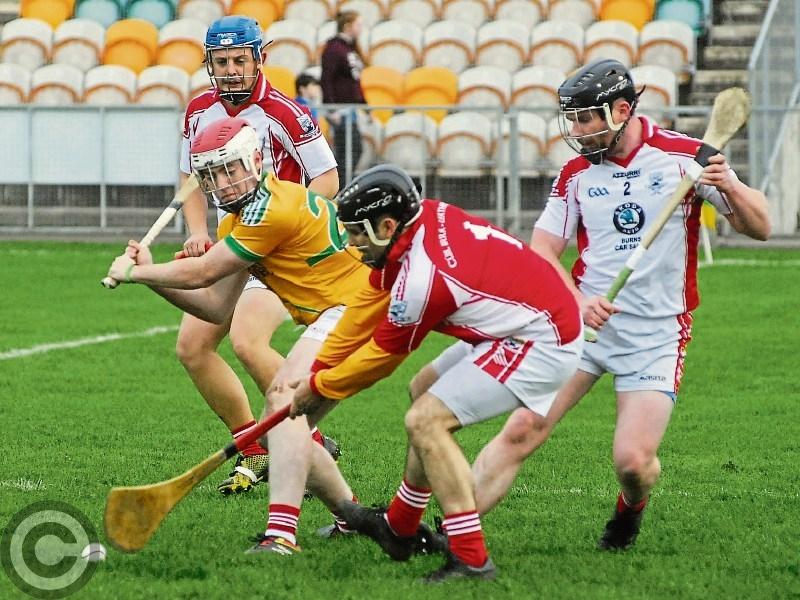 The Carrick men had won the Leitrim title with a less than convincing display against Cluainin nine days beforehand but they put that performance well and truly behind them in Avantcard Pairc Sean Mac Diarmada.

A physically strong Carrick used their natural advantages to great effect as they never let a young Coolera Strandhill build up a head of steam, their hassling and harrying of the Sligo champions ensuring they could never truly threaten the Leitrim standard bearers.

Compared to their County Final display, Carrick got a far better return from play and in Liam Moreton and his brother Colm, Carrick had two forwards that Coolera Strandhill could never get to grips with.

And Clement Cunniffe produced a superb display, showing great mobility and accuracy to always keep the Carrick men tipping over on their way to victory.

It leaves Carrick in a Connacht Final with legitimate reasons to believe that they can win a Provincial title and there is no reason to doubt why they can't do just that.

Carrick set the tone for their performance very early in this game as Clement Cunniffe burst through the Strandhill defence to fire over after just 40 seconds. A couple of bad wides from Colm Moreton and Vinny McDermott were matched by Coolera Strandhill who saw Shane Brennan hit the woodwork with a shot.

Liam Moreton showed great persistence to hold off a defender before sweeping over a point on seven minutes but Frankie O’Flynn showed good timing to catch and score in one quick move on 11 minutes.

Stephen Goldrick whipped over a good point and Cunniffe added a point from out near the sideline to open a gap before the Carrick veteran turned provider, his run leading to a hurried clearance that Colm Moreton sweetly placed between the posts 15 minutes.

But Carrick were brought back down to earth - a long shot seemed easy meat for Declan Molloy but he opted to bat the sliothar rather than catch and Conor Brennan pulled quickly and accurately to bury the ball in the back of the net.

Coolera Strandhill levelled the scores in slightly strange circumstances, a Carrick official getting involved with a Strandhill sideline ball that was then moved in for dissent which Eoin Comerford fired over the bar.

The final 11 minutes was something of a tit for tat with Cunniffe and Comerford swapped three frees each to leave the scores level at the halftime break on a scoreline of 0-8 for Carrick and 1-5 for Coolera Strandhill.

Again, Carrick got off to a flying start with Stephen Goldrick scoring a great point from a very tight angle after just 35 seconds of the second period while Strandhill missed two good chances.

The wides malady spread to Clement Cunniffe who put a free wide but then he hit a massive effort from the halfway line inside his own half on seven minutes. Straight away, Comerford hit back with a free from out on the far sideline to tie the scores.

But Carrick were beginning to find their rhythm and Liam Moreton scored a lovely effort but a series of quick passes found Cathal McCrann in space for a point less than a minute later. Coolera Strandhill crucially missed a couple of good chances to close the gap before Cunniffe put over a free to stretch the lead to four points.

Frankie O’Flynn put over a free with 12 minutes to go to keep Coolera Strandhill’s hopes alive but with Carrick clearing the ball after a bout of battling for ball, Liam Moreton made a great low catch, turned and fired over a great point from 50 yards.

The Sligo team’s attempts to hit back fell short with O’Flynn putting a free badly wide while a flying Stephen Goldrick made a great connection with a long ball, his flick unfortunately not into the net.

James Glancy scored a great point from distance while Goldrick was again denied a goal when Coolera Strandhill keeper Scanlon showed great bravery to block his shot, the save forcing him from the game while Clement Cunniffe converted the resulting 65.

Coolera Strandhill had the last score of the game with a Comerford point from play but it was never going to be enough to upset a dominant Carrick.

Talking Point: Carrick are back in a Connacht Junior Club  Final scheduled for next Saturday in the Connacht Centre of Excellence but don't know who their opposition will be as the Galway Junior Semi-Final was played on Tuesday with the Final down for this Thursday, hardly the ideal preparation for whoever wins but it might be good news for Carrick in the long run.

Turning Point: This game was nip and tuck until Carrick hit two crucial points from play in the space of a minute from Liam Moreton and Cathal McCrann - it gave Carrick breathing room and they exploited it to the full.

Ref Watch: Man in the middle didn't have a lot to do but Aaron Clogher did a good job, kept the game flowing and kept control well.

Highlight: Clement Cunniffe's freetaking and Liam Moreton's scoring from play stood out but an outrageous flick from Stephen Goldrick that almost resulted in a goal was the highlight.

Lowlight: Pity, no a shame that there was such a small crowd in Avantcard Pairc Sean Mac Diarmada to witness this clash - shows the uphill battle the small ball code has in this part of the world.