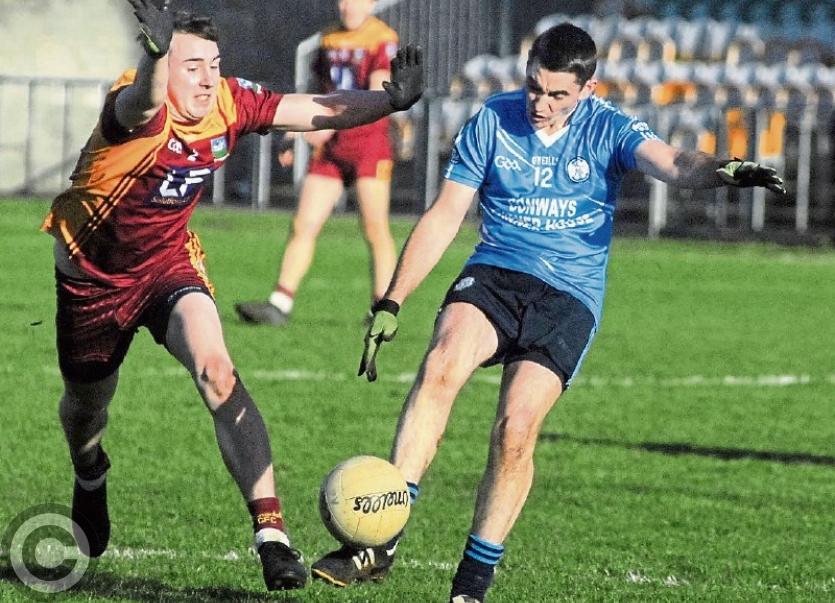 In the end, it took a wonder save from Diarmuid McKiernan to guarantee victory but Allen Gaels were clear winners of last Sunday's Dunnes Bar Division 2 title.

Annaduff, just a week after losing the Intermediate Final, were determined to end the year with some silverware but they found the Drumshanbo men were just that little bit sharper, that little bit fresher and that little bit hungrier in Avantcard Pairc Sean Mac Diarmada.

It must have been incredibly tough on Annaduff to have to raise themselves so soon after their loss to Fenagh but they made a valiant effort and were it not for McKiernan's injury time save, then Annaduff would have been talking of redemption.

Instead it was Allen Gaels who savoured victory, a victory that should have been far more comfortable given some of the terrible wides and missed chances the Drumshanbo men had over the hour. Their energy, workrate and commitment was huge.

Captain James Flynn led the way with a superb effort and he really led his team by example but the likes of Dylan McGowan, Thomas Mulvey and the duo of Martin Raftery and Caleb Duffy, who made an enormous impact off the bench, all played a huge role.

Will this victory finally push a young and very talented Allen Gaels team onto greater things? Hard to tell but there are clubs in Leitrim with far less natural talent than the Gaels making a big impact at Senior level so the future is definitely bright if these Allen Gaels players want it to be.

Eoin Gill opened the scoring with a second minute free but with both sides hitting wides, including a crazy effort when Allen Gaels opted to take a quick 13 metre free before firing wide, Martin Beirne finished off a good move with a fine point on 11 minutes.

Annaduff hit back with a goal when a high ball in towards the goalmouth saw keeper Diarmuid McKiernan challenged Kenny Cox but the ball fell to Sean Duignan for what was virtually a tap in.

Almost from the kickout, Annaduff won the ball back and sent it in to Alan Glancy who showed a lovely bit of skill to take two defenders out of it before dodging his own man to score a fine point.

Martin Beirne stopped the rot with a finely taken free on 16 minutes while Ciaran Walsh was unlucky to see a fisted effort hit the post. Annaduff responded with a Sean McNabola free but James Flynn blasted over on 19 minutes in reply.

Thomas Mulvey scored from long range on 21 minutes with the Drumshanbo men missing some good chances, including a 35 yard free from Diarmuid McKiernan in front of the posts, before they struck for their first goal.

A great move saw Alan Wynne cut through on goal and a nice off-load left Ciaran Walsh with a simple palmed goal to put Allen Gaels in front. And they extended their lead after a great run from sub Martin Raftery that ended with a fine point.

Annaduff finished the half in style with a Sean McNabola free and a lovely Eoin Gill score on the run to leave the halftime score level at 1-5 apiece.

Annaduff again opened the scoring in the second half with a Kenny Cox point in the first minute but the game took a major swing on two minutes when Jim McCormack made a great save to deny a goal bound but Martin Beirne showed brilliant finishing instincts to side-foot the ball to the net.

Sean McNabola cut the gap back to a point with a fifth minute point but Allen Gaels steadied themselves with two fine points from James Flynn, the second of which came after a great run. Martin Beirne then fired over a free after a heavy challenge to put the Drumshanbo men four points clear.

Annaduff almost hit back with a fabulous goal - a ball over the top to Kenny Cox and he set off on a powerful, passing the ball to Sean McNabola but his fisted effort drifted just over the bar rather than under it.

Sean Duignan cut the gap to two points five minutes from time as we seemed poised for a storming finish but it was a controversial one as Sean McNabola was very lucky to escape with a yellow card after lashing out at Martin Raftery in a rather sensitive area.

It almost proved very costly for Allen Gaels as Annaduff did indeed manufacture one goal chance just into injury time but Sean McNabola’s thunderous shot was parried out to safety by a brilliant stop from Diarmuid McKiernan to ensure a League title for Allen Gaels.

Talking Point: Hard for Annaduff players to stand watching another team pick up a Cup for the second week in a row - perhaps three hard games in two weeks caught up with them?

Turning Point: Allen Gaels second goal was huge - Annaduff had gone a point up and were looking to push on but the goal from Martin Beirne halted Annaduff's momentum and infused the Gaels with self-belief.

Ref Watch: Enda Egan did a solid job, may have been blinded by the sun for one or two decisions, but he generally had a strong outing.

Highlight: Diarmuid McKiernan made a wonderful save  to ensure that his team went home victorious.

Lowlight: Some of the wides from both teams were almost criminal but Allen Gaels were the most guilty, some heartbreaking wides that could have made their afternoon a lot more comfortable.