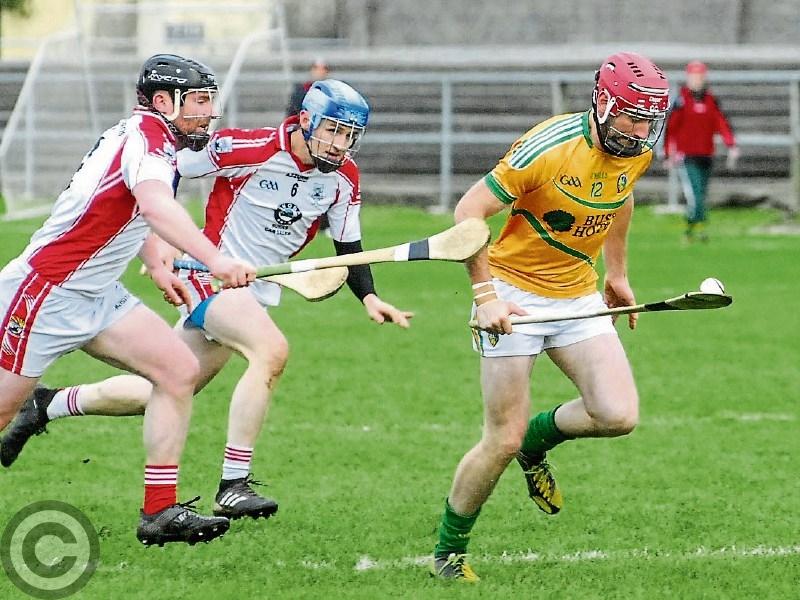 Carrick's Liam Moreton will be a key figure in the Connacht Junior Hurling Club Final. Photo by Willie Donnellan

In what is supposed to be the closed season, it seems like we are being overloaded with games on the first weekend of November with a couple of bumper contests to look forward to.

And there may be a further game is the Minors of St. Mary's Kiltoghert were successful last night (Tuesday October 30) in their Connacht Minor Club Championship Semi-Final clash with a very strong St. Brigid's side of Roscommon, the winners taking on Westport in the Connacht Final in the Centre of Excellence next Friday, November 2.

Melvin Gaels put up a strong showing in last Friday's Connacht Minor B Club clash with Tourlestrane of Sligo, losing out 2-6 to 0-8 after a very tight encounter.

Below we take a brief look at each of the games we definitely know are taking place:

Carrick-on-Shannon v Galway Champions: A hard one to predict here as we don't know who Carrick will be playing in Saturday's Connacht Final. The game might even get postponed but that doesn't look likely. All we can be sure of is that the Galway champions are a huge step up for Leitrim's standard bearers but this Carrick team have the ability, physicality and determination to win a first ever Connacht Club title for Leitrim.

Fenagh St. Caillin's v Shamrock Gaels: Fenagh may have lost to Ballinamore in the League last weekend but it is easy to write that off as the new Leitrim Intermediate champions are definitely targeting a run in this competition.

Shamrock Gaels came through a tough replay to beat favourites Curry last weekend and how much that will take out of them for this Saturday is hard to know. They may be without star names but they are a tough outfit who will give not an inch in Enniscrone. The question is what sort of form Fenagh St. Caillin's are going to be in? Have their inner fires been sated by their win over Annaduff and the celebrations that followed? Those are the key questions and will decide how Fenagh will do.

We know how they will play - concentrate on getting the ball to Ryan O'Rourke and see what happens. If they can give him a bit of support and they well and truly believe in themselves, Fenagh can progress here but it will be tough.

Fergal Clancy will carry much of the load again and he will need support as Easkey are sure to know this. The odds are against Glenfarne/Kiltyclogher but perhaps there is another big kick in them this Saturday.

Ballinamore Sean O’Heslin’s v Glencar/Manorhamilton: The last big Final of the domestic season sees two teams who will feel they didn't deliver on what they are capable of and there is also the matter of revenge as well! These two teams drew in the Quarter-Finals in what was, up to that point, easily the best game of the championship as Ballinamore came from four points down with six minutes to go to rescue a draw. The replay, unfortunately, never lived up to the drawn game.

A much more focused Glencar/Manorhamilton came out with all guns blazing and despite losing their two captains to injury inside the first 20 minutes, a magnificent display from the north Leitrim side saw them blow Ballinamore out of the water by 15 points. It was a victory that came with a cost for Manor as just a week later, Mohill delivered the same sort of beating to Glencar/Manorhamilton in the semi-finals and you can be sure that the north Leitrim side are looking for redemption.

Both teams exited the championship within a week of each other so you'd expect fitness levels to be somewhat similar but you get the feeling, rightly or wrongly, that this will mean more to Glencar/Manorhamilton than their Ballinamore counterparts. I may be wrong in that but Glencar/Manor have always been driven to succeed and expect no different here.

Also you've got to wonder can Ballinamore turn around the 15 point loss they endured in the quarter-final replay in such a short space of time. That loss will have hurt and if they can harness that hurt, they might pull off a surprise. But honestly, I feel that Glencar/Manorhamilton have just too much for Ballinamore and should take the title.