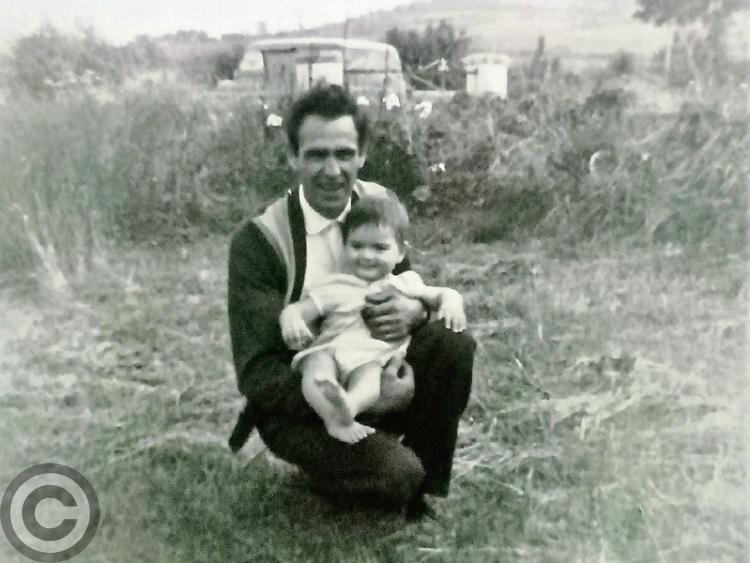 John Byrne seated in his father's lap pictured on their farm at Tully Dromahair. The van that housed the family's famous mobile shop can be seen in the background.

All Ireland final Sunday in the Byrne household of Tully, Dromahair, was bigger than Christmas.

Donald, a native of the townland, was football mad. His wife Madeline (née Lane) a proud Kerry woman. Neighbours used to come to gather around their TV to hear Michéal O’Hehir weave his magical spell on the third Sunday of September.

“When I think of my father, the picture in my mind’s eye is of him with a huge smile listening to a match on the radio,” says Donald’s son John, now a long-time resident in Dublin with his family. “You could find him plonked anywhere in the yard because the reception wasn’t always great. But the smile was always there.”

The Byrne house had an open door, especially for the older members of the local community on their way home from the village. Their neighbours were the Meehans, and John recalls their bread van permanently filled with jerseys. “Jim and Chrissie were wonderful community people,” John recalls. Donald Byrne had a mobile shop and was also known to everyone in the locale. His father John came from Dromahair too, as did his father, also John.

When Donald died too young in 1991 at the age of 57 years-old, Madeline moved back to Kerry. She’s still hale and hearty in her eighty-first year.

“We came from simple roots but those roots matter,” notes John. “When I heard about the Leitrim Wall I thought that buying a brick was the perfect way to commemorate my father. He was a huge Leitrim supporter and, with our neighbour Teddy Loughlin, followed them everywhere. They weren’t always good days, but he loved them. The idea of contributing to a facility that aims to foster excellence in future generations of Leitrim football would appeal greatly to him. Such an undertaking represents everything my father stood for in the community and my small contribution in buying a brick in his honour is the perfect way to commemorate him. It’s a lovely thing to have for our family.”

l To find out more about The Leitrim Wall project to complete the GAA Centre of Excellence in Annaduff see the advert on page 5. Go to www.leitrimwall.com to secure your personalised brick or buy one for a loved one this Christmas.