This article first appeared in the Leitrim Senior & Intermediate Finals programme and has been amended to reflect results. 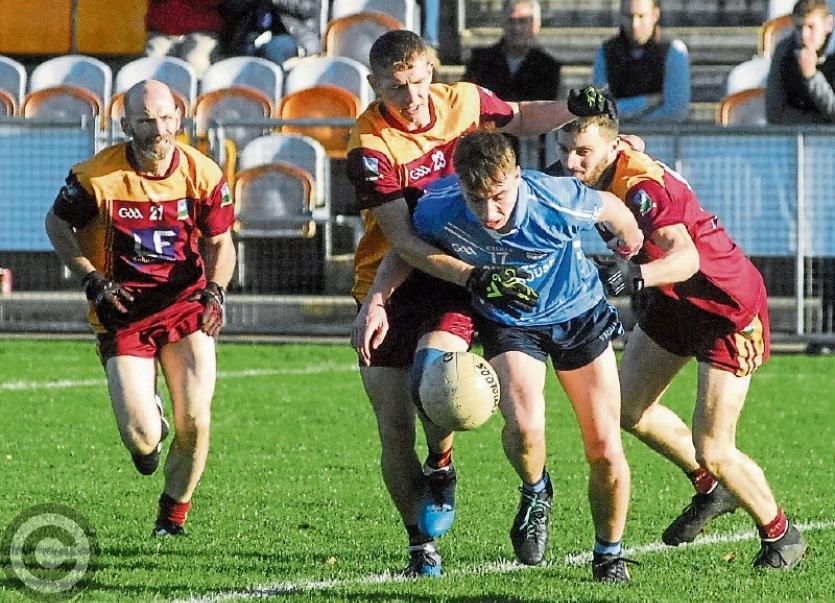 Calebu Duffy tries to break away from the Annaduff defence in the Dunnes Bar Division 2 Final. Photo by Willie Donnellan

Revolution is in the air in the GAA world these days - you can’t avoid talk of the Super 8s, new hurling formats, new playing rules, tiered football championships and the Club Players Association fighting for the plight of the club players.

Change is not a bad thing and it is to the credit of the GAA that there is a desire to provide competitive and meaningful games at Inter-county and club level. Some ideas have worked, some less so but the danger to the GAA as an organisation is in doing nothing.

It is a lesson the clubs of Leitrim would be wise to heed!

Chatting to fans and players throughout this year’s Club campaign, talk of revamping the Championships and Leagues of the County has never been more frequent. Some are already working hard on proposals to bring a more competitive product for clubs at a realistic standard.

Some will argue the toss but there urgently needs to be a recognition that the current system is simply not serving players, clubs and spectators well - just look at the results from this year’s Senior and Intermediate Championship.

Up to the finals, the average winning margin from 40 games at Senior level, including relegation games, is a staggering 9.1 points per game! In nobody’s book is that competitive.

Delve into the figures a little deeper and we see that there were just eight games out of the 40 where the winning margin was three points or less. Far more worrying is the fact that 12 games decided by ten points or more with ten of those by 15 points or more.

Surely there is solace in the Intermediate Championship, traditionally the most competitive championship where all are evenly matched and everyone can win?

Statistically, yes it is but not by much - an average winning margin of 8.02 points per game can hardly be called competitive and of the 39 games so far, 14 were decided by three points or less, a big improvement on the Senior. But on the flip side, 14 games were decided by 10 points or more, again higher than the Senior grade!

And lest we be accused of cooking the figures - after all there are lies, damned lies and statistics - just two games before the final in the entire Junior A grade were won by six points or less with one drawn game!

Whatever about spectators, it can’t be fun for players to endure these sort of games. And you have to question a system where teams are rewarded with a place in the quarter-finals despite losing more games than they have won!

And even using cold hard logic, how do we have 12 clubs competing in the Senior Championship when we had just 23 active clubs in 2018? Is the standard of football in Leitrim so much higher than everywhere else in Ireland?

A thrilling Senior Final won in great style by Aughawillan and Fenagh's victory after a replay in the Intermediate grade shouldn't and mustn't disguise the bigger picture!

It’s easy to blame the County Board but it has been the clubs time and time again who have rejected the sort of reform needed to revitalise the club game in Leitrim. Despite overwhelming evidence that players were all in favour of League games without County players, Clubs rejected their that proposal only last December - after all, they’re only players, what would they know!

It is time for players those making the sacrifices yet enduring an antiquated system - to make themselves heard in each and every club and insist that their voices be heard and that their Club insists on meaningful reform of Club structures.

The evidence is right before our eyes so now is the time to draw up proposals and get working on a better, more competitive and far more enjoyable future for the Club player in Leitrim.