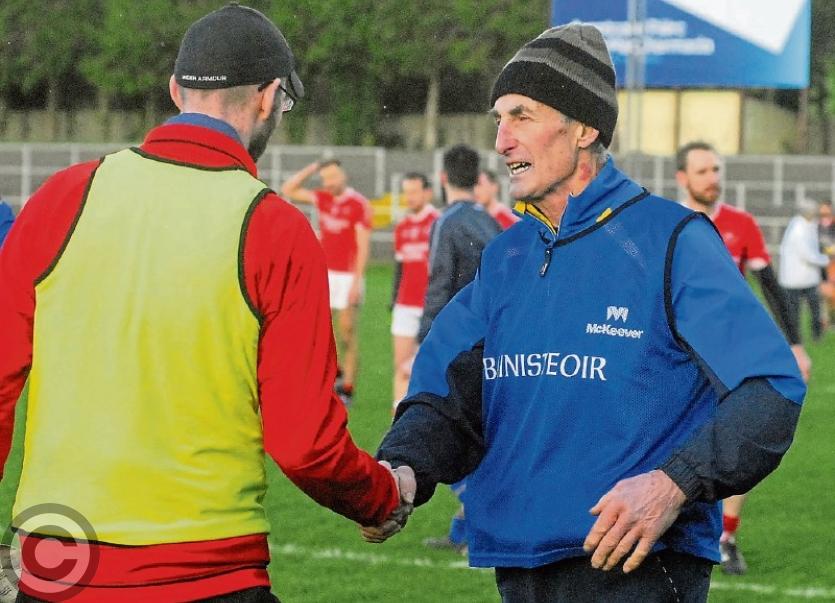 On the face of it, Aughawillan suffered a comprehensive defeat last Sunday but like many of us in Pairc Sean, Aughawillan manager Tommy McCormack knew the final scoreline didn’t tell the full story.

Asked by the Observer after the game if the scoreline was misleading, Tommy’s succinct reply was “It was - the intensity that was in it, the effort and the enthusiasm that was shown out there, of course it was.”

But the Aughawillan manager is realistic enough to know that Ballintubber were the superior team - “We knew after watching Ballintubber against Tourlestrane down in Enniscrone what they are capable of doing, we knew that if you gave the ball away cheaply out there, you’re going to pay a hefty price and you’re going to have work extremely hard to get it back.

“Those guys dictated the game when they were ahead, they played around with the ball and we had to work extremely hard to get it back. It was either force an error or force a turnover but we had to get it back before we could make any inroads. They went into the second half with a three point lead and commanded most of the half.”

The first half performance had Aughawillan dreaming that the win was on but Ballintubber had other ideas and Tommy agreed - “We scored five points of exceptional quality in the first half and we conceded at least three or four points that on another day you wouldn’t actually concede. It left us three points in arrears at halftime.

“Still with the bit of the breeze in the second half, we felt that if we could the ball and with the movement in the game we could actually nullify that and get back into the game and into the lead. But they just played around with that ball, held onto that ball and they dominated possession really.”

Some of it was down to Aughawillan’s own errors according to Tommy - “They were elementary mistakes, mistakes we made when we were in possession of the ball that cost us those goals. We had the ball in our hands and it ended up in the back of the net.

“It is probably a learning curve for a lot of those lads, to keep the ball moving and not get caught in possession. They are a very young team.”

Certainly you get the feeling that Tommy believes there was more in Aughawillan than they managed to show last Sunday - “The whole thing with the young lads now is that they’ve one life to live and it is not a rehearsal and when college is over, lads have a tendency to travel. Every club is going to encounter that.

“If we could have had that team together since last May, then we could have been a formidable force here today. That team was really just got together before we played Mohill in the first round of the championship.

“Aughawillan play a lovely game. We train up in Shroid on a Wednesday and I always maintain that if they can bring the level of enthusiasm, the ball handling and the pace that they have in Shroid to the domestic game down here, they’d be a serious outfit. We bring a bit of it but we don’t bring it all John.”