International Year of the Salmon launched 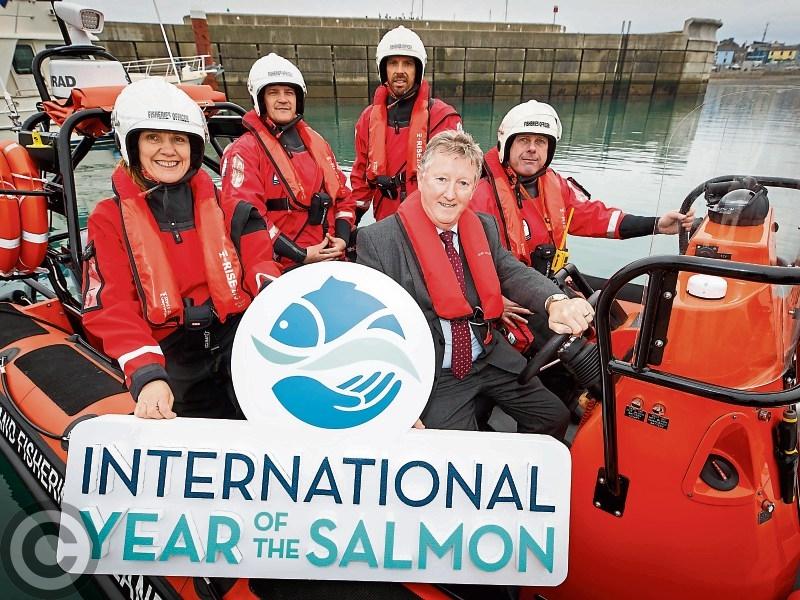 It is estimated that 240,000 Atlantic salmon returned to Irish shores last year, according to Inland Fisheries Ireland.

The enduring Atlantic salmon populations in Irish waters were being highlighted at the launch of the International Year of the Salmon (IYS), which takes place in 2019. Sean Canney TD, Minister with responsibility for the inland fisheries sector, marked the launch by unveiling one of a new fleet of 12 RIBs (Rigid Inflatable Boats) to highlight the importance of fisheries protection especially during migration along the coasts.

Minister Canney said: “It is vital that we protect our valuable fisheries resource as environmental change and human impacts are placing salmon and other species at risk. The International Year of the Salmon is a global initiative which aims to bring people together to share knowledge, raise awareness and take action on how we can ensure the resilience of salmon in Ireland and in the Northern Hemisphere. Ireland is recognised as an international exemplar in terms of placing the conservation imperative at the very heart of our salmon management and I am committed to leading our participation in this initiative on behalf of the Government, the Department and Inland fisheries Ireland”, he added

The continuing declining trend in many wild salmon stocks both nationally and internationally in recent decades has been attributed to many different factors such as climate change, alterations to physical habitats, water quality issues, predation, over-fishing and increased mortality due to sea lice.

International Year of the Salmon is a joint world-wide initiative of the North Atlantic Salmon Conservation Organisation (NASCO) and the North Pacific Anadromous Fish Commission (NPAFC) alongside other partners across the globe, creating an international framework for collaborative outreach and research. It is hoped that IYS will raise awareness of what humans can do to ensure salmon and their habitats are conserved and restored against a backdrop of several environmental factors.

Dr Ciaran Byrne, CEO of Inland Fisheries Ireland said: “I am delighted that we are adding to our protection fleet today, particularly in light of the challenges facing salmon stocks across the Northern hemisphere. In Ireland, salmon are part of our national identity, holding a special place in our culture and heritage. In fact, salmon populations have sustained many rural communities over many decades. The extraordinary life cycles of salmon however exposes them to many environmental and human caused factors which influence their health and populations.

Fisheries managers and scientists have been concerned for a number of years about the declining numbers of salmon returning to the Irish coast. International Year of the Salmon offers us an opportunity to start an important conversation around how we can protect, conserve and restore salmon populations in Irish and international waters and more importantly, how we can inspire action. Inland Fisheries Ireland looks forward to continuing this conversation over 2019 and beyond.”

I would like to take this opportunity to wish each and every one of you a very happy and peaceful Christmas. Stay safe on the water and always wear a lifejacket when on or close to water.