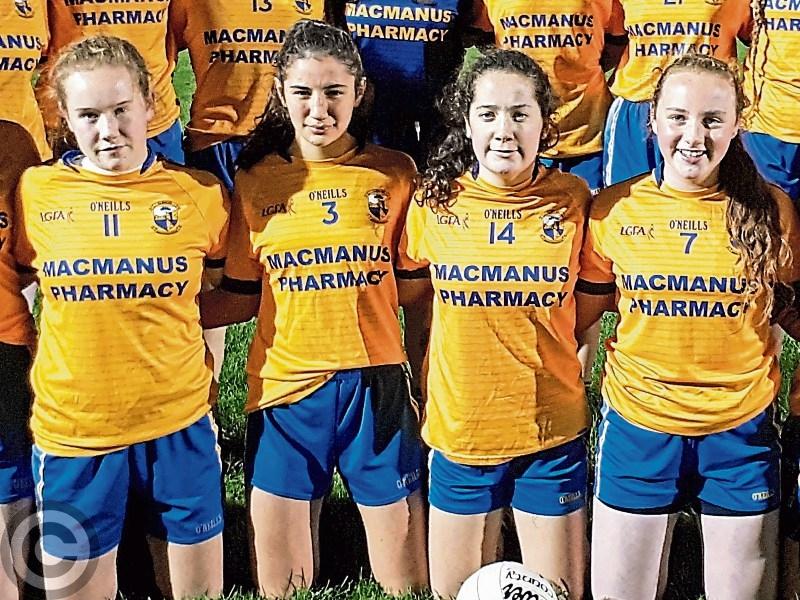 The goal scoring threat of Muireann Devaney and Leah Fox carried the day for Glencar/Manorhamilton in a rain soaked Cloone last Friday evening.

Friday's Final has been deferred due to a waterlogged pitch and while the Cloone pitch was in amazing condition, a tribute to the work of the club, the conditions were hardly conducive to good football, leaving you wondering about playing football at this time of the year.

Glencar/Manorhamilton got off to a blistering start with a goal from Muireann Devaney, after a one-two with Leah Fox, two minutes in. Devaney would add a free before Ballinamore keeper Erin Keegan saved a goal bound shot from Fox.

Sean O’Heslin’s hit back on seven minutes when a brilliant team move going through four players and the length of the field was ended by Lily Byrne firing to the net. Devaney hit back with a free but Laoise Moran King pointed after a great run from the middle of the park on 10 minutes.

A dominant Ballinamore took the lead when a high crossfield ball found Mollie Murphy just outside the square, Murphy showing great persistence to beat both a defender and keeper Hannah Gallagher to finish from the net from close range.

Ballinamore should have extended their lead but three missed frees and two missed goal chances, one of which was a good save by Hannah Gallagher from Emma Beirne meant the O’Heslin’s didn’t really show their dominance on the scoreboard.

Niamh Donohue did put over three frees and Lily Byrne one as O’Heslin’s led by six points with seven minutes of the half left. But typical of Manor, when they got a score, they tended to add a lot to it.

First came a goal against the run from play when good work from Leah Fox set up Dervla McManus for a close range goal. Fox then added a point when a goal appeared on but the full-forward wouldn’t be denied as a poor clearance led to the ball coming to Fox and a great finish found the net.

This all happened in the space of three minutes a Glencar/Manor transformed a six point gap into a one point lead but a lovely point from Laoise Moran King ensured the sides would go into the second half level on the scoreboard, 2-6 to 3-3.

Glencar/Manorhamilton would have the wind in the second half but given the heaviness of the pitch and the conditions, it didn’t seem to make much difference and it actually took a defensive error when Ballinamore defenders missed the ball, a Devaney pass and a great low Fox finish to the net.

Niamh Donohue replied with an eighth minute free but over the next three minutes, Devaney would find the net twice, the first after a foul on Leah Fox led to a penalty and the second after a great crossfield pass found Devaney charging in to find at her ease.

A shell shocked Sean O’Heslin’s never recovered particularly as Glencar/Manorhamilton then withdrew Devaney and most of their forward line into defence to clog up the line Ballinamore’s line of attack and they did it magnificently as O’Heslin’s simply never got another sight of goal.

Niamh Donohue pulled back a point after 13 minutes without a score while the energetic Rachel Conlon capped off a fine display with an injury time score. The last score fell to Niamh Donohue from a free as Glencar/Manorhamilton celebrated victory.

Main Woman: Hard to look beyond Muireann Devaney - three goals but just as important was her sweeper role in the second half. Leah Fox was deadly too while Rachel Conlon and Hannah Johnston shone. For Ballinamore, Niamh Donohue, Laoise Moran King, Emma Honeyman, Lily Byrne & Aoibhin McGoldrick were best.

Talking Point: Ballinamore will be wondering how they lost by seven points as they dominated possession for long periods. But as long as Manor had Muireann Devaney and Leah Fox in their ranks, goals were always a possibility and that is what won the day. Once they got in front, Manor dropped Muireann Devaney back as an extra defender and after that, there was no way through for Ballinamore.

Turning Point: The first 11 minutes of the second half saw Glencar/Manor strike for three goals to kill off the game.

Ref Watch: Referee Ray McBrien didn't have a lot to do but did it well in tough conditions.

Highlight: Hard to pick a highlight out on a night not suitable for football but the great team move that led to Ballinamore's first goal from Lily Byrne was exceptional given the conditions.

Lowlight: Anyone that puts out young footballers, male or female, at this time of the year and in the conditions we endured last Friday needs their heads examined.