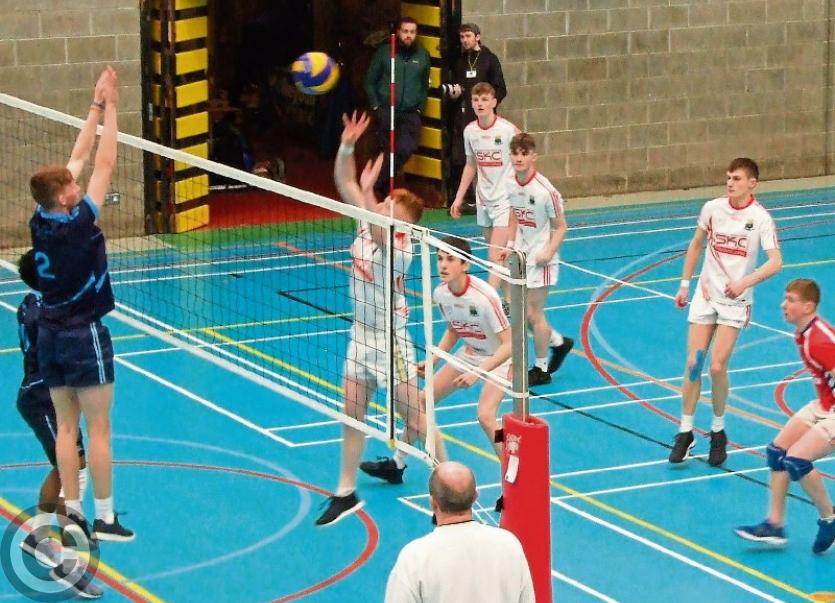 The past year was an unbelievable dream run for Drumshanbo Vocational School in schools volleyball when they won all three Irish titles in an unprecedented clean sweep.

But, all the time, lurking underneath them was St. Brigid's Loughrea and finally the Galway school erupted as manager Mary Barrett's relentless training paid off.

The score says three sets to nil but it was a good final with the best volleyball played by Drumshanbo in the first two sets. In all three sets, it was very competitive with Drumshanbo having encouraging leads in two of the sets.

It was hard to believe what was going to unfold as, after a dreadful start, Drumshanbo reigned supreme in the early first set. Down, 0-3 Gareth Gilmartin was in scintillating form. He hit a variety a powerful spikes and followed up with aces on serve while Fergal Moran was equally lethal hitting down.

Drumshanbo led 10-5. True, Brigid's rallied to 11-12 but a Barry McWeeney spike winner, a Colm Moran Spike and another winner from Gilmartin put them 15-11 ahead. Drumshanbo hadn’t missed a serve either. But neither had Brigid’s. And the tide turned. A lucky ball from Loughrea rolled on the net and dropped on the Drumshanbo side.

Next Fergal Moran was unfairly judged to have interfered with play on yet another of his winners. In what turned out to be a crucial point, Gilmartin aced at 19-18.

But the referee blew his whistle for a Loughrea rotation error. After a very long discussion, they replayed the point! It broke Drumshanbo momentum. Errors followed all over, including a missed serve, and incredibly, Loughrea crept from 20-20 to game.

Set two was nearly a replica of set one - Gilmartin excelled on Peter Winters setting, with six winners to give Drumshanbo a 7-3 lead. Drumshanbo were totally on top as the Brigid’s scores were Drumshanbo errors.

But, for the first time Brigid’s asserted themselves and with three spike winners and two aces hauled themselves to only 9-10 behind.

Unfortunately though, just as Brigid's winners then dropped, Drumshanbo errors crept in. They led until 13-12 and it was level at 16-16. They only hit one winner. There were loads of rallies that had the crowd gasping. Diarmuid McKiernan, captain and libero, commanded the backcourt and marshalled them well but the final hit seemed to go out.

Brigid's kept close in the third set and it was level seven times up to 8-8. There was a fabulous rally at 5-5 with great saves from Cathal McGourty and Gilmartin but Brigid’s tipped down the winner.

A Cathal McGourty clean winner and a block from Barry McWeeney however suggested the plan B formation seemed to be working. McWeeney had been the setter and McWeeney the spiker for the first two sets. But, from 8-8 on, Brigid's, now the more relaxed for the first time in the game, hit more winners than Drumshanbo while having no error, going from 13-11 to 21-19.

Fergal Moran continued to cause trouble if he got the opportunity. Drumshanbo could break the Brigid’s serve but, crucially, four different players missed their serves. Emmett Moran came on and made a spectacular save at 12-17.

However, not serving, they put no pressure on Brigid's and, two sets up, with a big lead Brigid’s hit with abandon at the end. Enda Keegan came but the tide rolled in.

Unlike last year, when five of the Drumshanbo players were in their sixth playing year in the school, only Diarmuid McKiernan had the same experience this year.

Drumshanbo had lost four very experienced setters but debutants McGourty and McWeeney can feel well pleased with their performances. Indeed, along with Winters, the chasing down by the setters, to set the second ball was a feature of the match throughout.

In the end, Brigid's have to be applauded for their outstanding defence in the first two sets. They were outhit but they kept the ball in play and forced to Drumshanbo to have to do it again and again and then, maybe ….. fail.

All Drumshanbo players played above themselves in last years’ finals and again in this year’s semi-final. It is hard to do the non-stop. Well done to the much smaller Leitrim school. It was still easily the second best performance in a senior final in 13 years.