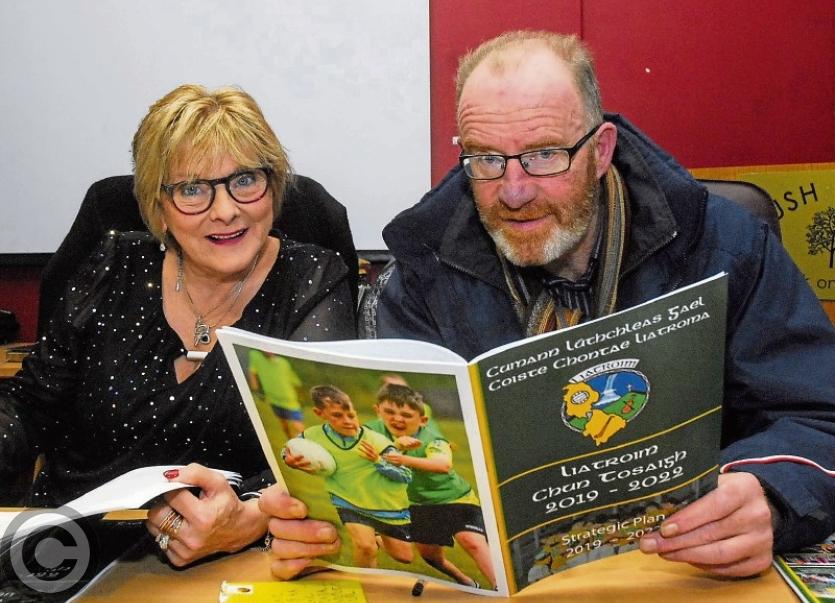 County Board Secretary Attracta O'Reilly and PRO Declan Bohan pictured with the Strategy Report 2019 to 2022 that was launched at the Convention last Sunday. Photo by Willie Donnellan

The GAA may have the name of being a conservative organisation but Leitrim clubs belied that reputation last Sunday by approving a series of radical and unprecedented changes to club championship and league structures.

Before a ball is even kicked, 2019 is shaping up as the most exciting and challenging year ever for clubs after Sunday's Leitrim GAA County Board Convention overwhelmingly approved dramatic changes to Club League and Championship structures.

Guided by the expertise of former Leitrim GAA County Board Secretary Declan Bohan who proposed and explained the motions, clubs found favour with the radical proposals that will see clubs playing for their places in the new formats for the 2020 season.

In an amended motion, clubs agreed to a proposal that will see the 2020 Leagues divided into three Divisions of eight, eight and seven first teams and two Reserve Divisions made up of second and third string teams based on the respective finishing positions of first string teams in the 2019 Leagues.

Only first string teams will play in the Division 1, 2 & 3 with their respective second teams in the corresponding Reserve Leagues, thereby ensuring that clubs can play double headers with their first and second string teams.

The change is even greater in the Championship where, after next year's competition, the 2020 Championship at Senior, Intermediate & Junior A level will comprise of ten teams in each grade, irrespective of first or second string status, with eight teams in Junior B and six teams possibly in Junior C.

It means that every single team will be playing for their status during the 2019 Championship, the teams who reach the Quarter-Finals, the 2019 Intermediate winners and the winners of the relegation playoff securing Senior status for 2020. In the Intermediate grade, three teams will drop from Senior instead of one while four teams will be relegated to Junior, again ensuring 10 teams in Intermediate grade for 2020.

It is the biggest single shake-up in the structures of club league and championship football since the Group system was first introduced to Leitrim football in the year 2001 but it should ensure a higher standard and much more competitive club competitions in the years ahead.

Proposing the motion on the Leagues, Declan Bohan revealed that a small committee comprising of Chairman Terence Boyle, CCC Chairman Vincent O’Rourke, Coaching Officer Hughie Clinton and Bohan himself had drawn up the proposals after examining results for a number of years.

He agreed that separating the first & second string teams in the League was a big move but the current system not doing a service to the better club players who were not regular games against players of the same standard.

Declan pointed out that in this year’s League, four games were played off in a 15 day period in the month of July and that schedule does not cater for the county’s better club players, nor was it very enjoyable for county players.

Delegates expressed worries that players would see this secondary competition the same as the Shield, Declan said that while a system may evolve to a similar system as operates in Monaghan, the most important thing was that games must be played.

Ballinamore Sean O’Suilleabhain suggested that the motion be amended so that there be two Reserve Divisions instead of three and that it was vitally important that each club enter second and third string teams to ensure the success of the new system.

Declan Bohan also pointed out that with growing moves to bring in a second tier at All-Ireland Inter-county level, moves which may comes to fruition, it would mean counties having more games, not less, during the Summer.

After the amendment was agreed by delegates, the amended motion was passed clearly with 41 votes.

Proposing the motion for the restructuring of the club championships, Declan pointed out that at Senior and Intermediate level, it took 30 games to eliminate just four teams from the Group stages and only seven more to finish the entire competition.

Declan pointed out that out of the 30 games, 11 games had a winning margin of ten points or more and that it was obvious that a gap had emerged between the top six teams and the rest. Between 1998 to 2007, there were eight different winners of the Senior Championship but from 2011 to 2018, only five teams had contested the Senior Final.

He added that a lot of the time we were afraid of doing something that might cause us to lose our championship status but that clubs would be better served in the longer term by dropping down a grade and being competitive.

Drumreilly's Sean Maxwell said that seeding all the teams for this year's championship was not fair and that it should be confined to the four semi-finalists but his proposed amendment was defeated.

Sean O'Suilleabhain said the motion was a slippery slope to an eight team Senior and Intermediate championship. From the survey for the Strategic Plan, Sean said that very few people were looking for championship reform and that notions reforming the championship would lead to a better standard was pure hogwash.

Sean said that if you look at other counties, they all had ten or 12 teams in the Senior championship, He also pointed out that the new system would not eliminate lopsided games as the two most one-sided games this year were the quarter-final replay and semi-final involving Glencar/Manorhamilton.

The Ballinamore official concluded that voting for this motion was like turkeys voting for Christmas.

However, the motion attracted strong support with Kiltubrid's delegate saying their players had mandated them to vote for it even though they could see themselves dropping grades as a result.

Coaching Officer Hughie Clinton said that the Group stages games were not competitive and that it was not an enjoyable experience for players. He didn't think the motion was turkeys voting for Christmas but rather a move to embed a more competitive structure for our players and bring back more people to the park to play football.

Replying to the points, Declan Bohan said there would be a knock-on effect for the majority of clubs but he believed that big gaps had opened and that the Senior championship is increasingly the preserve of a small number of clubs.

After a show of hands, the motion was carried with 35 votes in favour.

Terence Boyle thanked the committee for their work and was hopeful that it would bring about change and that the structure could also be tweaked going forward.

Terence also pointed out in view of the meeting voting for the new proposals and the importance of clubs playing for the positions next year, the Board would withdraw their motion on clubs playing three rounds of the League without County players.