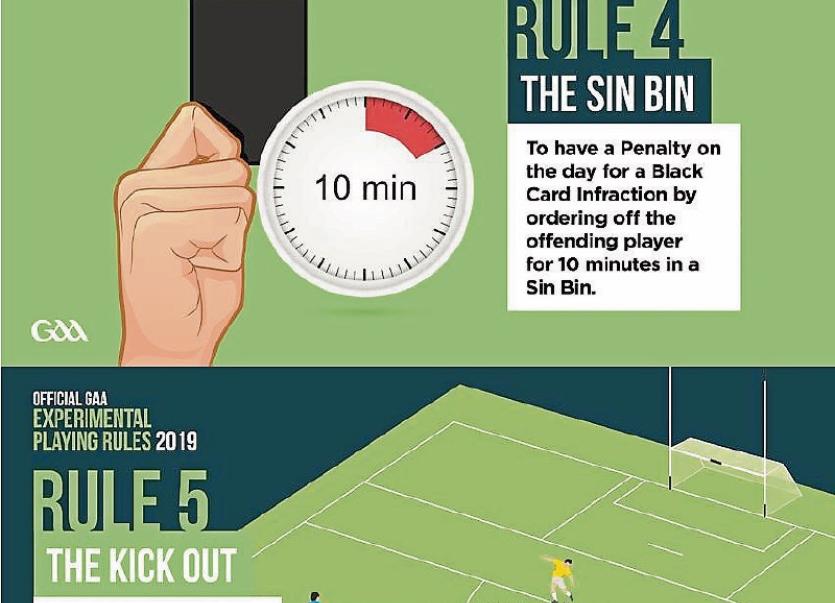 A graphic of some of the new rules

New rules, a new manager, a new name for the county ground and even a new jersey for Leitrim football in 2019 - yes, the new gaelic football year is finally and very definitely here.

Many Leitrim fans will get their first chance to see the Green & Gold troops under the guidance of former Cavan manager Terry Hyland next Sunday, January 6, when Avantcard Pairc Sean Mac Diarmada hosts Mayo in the first round of the new look FBD League competition.

After last year's campaign that saw each team play each other over the space of two week's, Sunday's encounter (1.30 pm throw-in) is a winner takes all as the competition reverts back to a knock0ut, the winner facing Galway in the semi-finals a week later.

Former manager James Horan is back in the hot seat and has undertaken a massive trawl of the county to unearth new talent that might finally take Mayo to the promised land and it is expected that a large Mayo crowd will make the journey to Carrick on Sunday.

Sunday's clash will also be the first chance for many spectators to see the new rules that are being trialled by the GAA.

There is acknowledgement that a new approach is needed in gaelic football due to the preponderance of defensive system but new rules may not be the solution as it is about changing attitudes more than rules.

But most of all, Sunday's game is a chance for Leitrim fans to see who will be wearing the County colours in 2019 after months of speculation, rumours and conjecture and finally see a Leitrim team on the field.

Ironically, Hyland's arrival has raised the expectations bar far higher than it normally is at this time of the year with many fans confidently predicting a promotion run in Division 4.

Whatever about expectations this year, next Sunday is a new dawn once again for Leitrim football and one that we've all been waiting for excitedly. Roll on 2019!