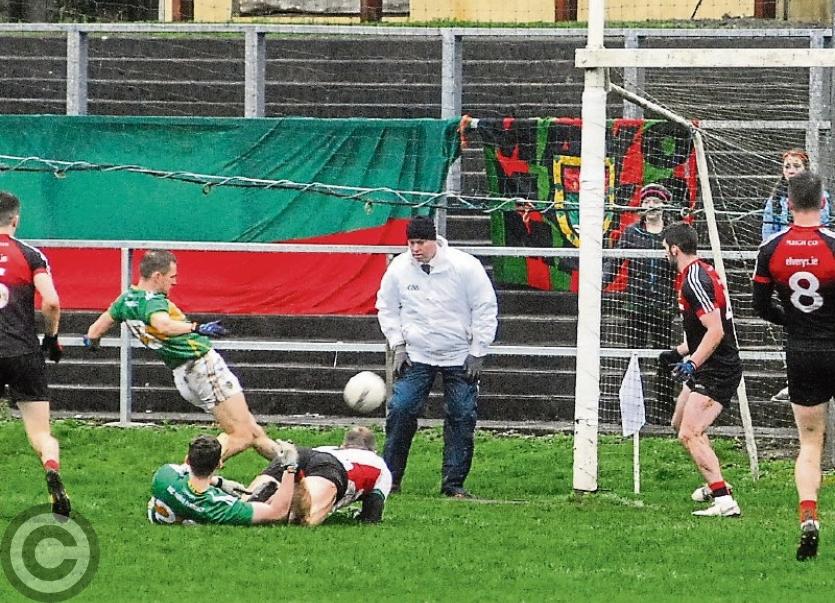 The opening game of the 2019 season carried a lot of expectation for Leitrim fans but a tremendous second half showing saw Leitrim recover from an eight point deficit to snatch a draw over four minutes into added time.

So good was the performance that Leitrim fans could legitimately gripe that the Green & Gold hadn’t won the game as they spurned four great goal chances, three in the second half, that might have given Leitrim a rare win over Mayo.

It didn’t look that way in the first half as Mayo coped with everything Leitrim had to throw at them and the new rules and looked a class above the home side, their patient clever play opening up huge gaps in the Leitrim defence.

The second half was a different story as Leitrim dropped extra-cover for their overworked defence and it seemed to free up space for Leitrim, something that was even more obvious during the sin-binning of Dean McGovern.

Instead of conceding a shed-load of scores, Leitrim actually outscored Mayo 2-1 to 0-1 and got them back into the contest and made a real game of the an occasion that seemed to be getting away from Terry Hyland’s charges.

As it was the game made history with the first ever penalty shootout and Mayo prevailed with four superbly executed spot-kicks, Leitrim’s kicks just lacking the precision the visitors exhibited in a cruel way to decide a contest.

But Leitrim fans left the game with a smile on their face - Hyland’s team was energetic and refused to back down and took the game to Mayo in the second half. Naturally, they lacked the experience of the Mayo men who always seemed to have that extra bit of class on the ball.

The controversy over Dean McGovern’s late intervention in the contest should not detract from an excellent Leitrim display that will have fans believing that this could finally be the year Leitrim can win promotion from Division 4.

Yet a word of caution - it is not 12 months ago that Leitrim also drew against Mayo over in Castlebar and with a team just as experimental as was on show last Sunday so reading too much into the FBD League might not be the wisest thing in the world to do!

But there are reasons for optimism - Leitrim would appear to have far more attacking options than they have had for some time and we were nowhere near full strength. Defensively, there are concerns but it was a new look unit that may be greatly changed by the time the League starts.

The Allianz League campaign will be a much different beast - we don’t know how many of the new rules will survive but Leitrim are putting themselves out there as one of the teams to watch and it was obvious on Sunday that Leitrim are much further along in their fitness work than Mayo are.

Mayo dominated the first half and despite three points in the first three minutes from Pearce Dolan, Shane Quinn & Dean McGovern, Mayo easily exposed the Leitrim defence with goals from Brian Reape and Fergal Boland .

Shane Moran almost had a goal but Leitrim kept in touch on a halftime scoreline of 2-9 to 0-8, Leitrim ruing another missed goal chance straight from the throw-in when Jack Heslin saw a shot saved.

A strong Heslin run after an interception saw him set up O’Rourke, the Fenagh man’s shot blocked but the ball fell to Evan Sweeney for a tap in. Seconds later, Mayo again turned over possession, Heslin surged and this time O’Rourke drilled his shot to net.

Domhnaill Flynn’s free drew Leitrim level but Mayo hit back with points from Fergal Boland and Jason Doherty, Sweeney responding with a free before he crashed a shot off the crossbar after again intercepting a sloppy Mayo pass.

O’Rourke had a goal chance but shot badly wide before Mayo broke upfield for Boland thumped a huge effort over the middle of the crossbar as the game ticked into added time.

Sweeney worked a one-two with Shane Moran to brilliantly score from the corner but with Dean McGovern getting a yellow card and a red, it looked all over. Incredibly, McGovern not only didn’t leave the field, he provided the final pass for Damien Moran to score the equalising point.

Talking Point: Just how Dean McGovern, a player clearly sent off, allowed play a part in setting up Leitrim's equaliser is truly, truly bizarre. In all likelihood, Leitrim would have lost the game on appeal but imagine what we'd be saying if Lee Keegan had set up one of his teammates for a winner after being sent off. Truly bizarre.

Turning Point: Easy - two Leitrim goals in a minute transformed a game that seemed to be a stroll for Mayo into an arm-wrestle.

Ref Watch: Hard to know what to say about James Molloy - did a lot of things well, gave Leitrim one or two soft decisions but the failure to ensure Dean McGovern left the field will overshadow a lot of what he did.

Highlight: Ryan O'Rourke's cracking goal that cut the gap to a point was a real statement of intent.