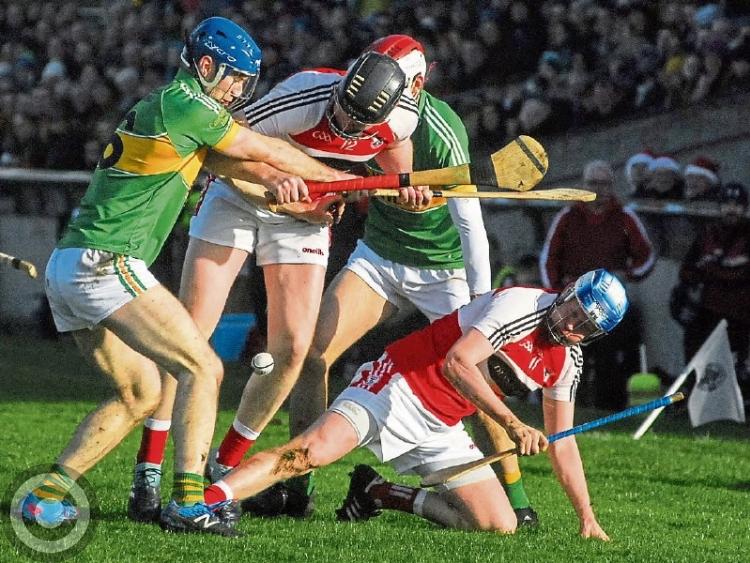 It's hard to avoid the “what ifs” if you are a Carrick hurler this week despite a marvellous display last Sunday in the AIB All-Ireland Junior Club Semi-Final.

Carrick showed immense bravery in their heartbreaking 0-10 to 1-8 loss to Castleblayney Faughs in TEG Cusack Park, Mullingar, displaying a resolve and skill level that had the fans enthralled and thrilled.

Five points down and seemingly on their way to an inevitable defeat, Carrick threw off a lethargic first half and fought their way back into this contest, dominating the final 20 minutes so comprehensively that it only seemed a matter of time before they grabbed a deserved equaliser.

Talking to fans afterwards, pride was the overriding emotion as they were thrilled with the spirit, the skills and never say die attitude displayed by their Carrick heroes.

But the hard-headed realists in the Carrick camp will realise today, three days afterwards, that this was a glorious opportunity let slip.

Carrick were uncharacteristically lethargic in the first half and they could thank a bad off-day from the Castleblayney freetakers for keeping the game close as the Monaghan men hit five frees wide, as well a s few more from play, in the first half.

Carrick relied far too heavily on the superb Clement Cunniffe for scores for three quarters of this encounter and it was noticeable that the Leitrim and Connacht Champions put the Monaghan men under huge pressure when scores from play came into the equation.

And then there were Carrick's missed chances - Castleblayney may have had more wides but it was a couple of missed goal chances that hurt most as the Moreton brothers were both denied good clear-cut chances.

Colm saw an effort blocked while Liam's shot looked headed for the net only for a deflection and a wonder save to take the power from the shot.

Even greater regret will come over Castleblayney's decisive penalty goal that proved the difference - a half blocked shot seemed easy work for keeper Declan Molloy but crucially two Blayney players sprinted through to put pressure on him.

Molloy turned back, lost the sliothar and then took down Mark Treanor for an obvious penalty and suddenly Carrick were looking at a five point deficit in a hard fought game where chances were always going to be at a premium.

Yet it was only after the goal that Carrick finally let the shackles off and showed what they are truly capable of, playing with aggression, speed and an intensity that forced Castleblayney back time and time again.

That Carrick's efforts didn't lead to a win was cruel and heartbreaking as they certainly had enough of the play to take the verdict. But credit to Castleblayney too - under immense pressure, they held firm in the final ten minutes to hold on by the minimum margin.

With both teams missing early chances, the impressive Hugh Byrne opened the scoring on four minutes, added to by Fergal Rafter on six minutes. But already Castleblayney were missed some great chances and it set the tone for the game.

It took 11 minutes for Carrick to score, great work from youngster Cian Mallon and Stephen Goldrick winning a free for Clement Cunniffe to tap over. Cunniffe added two more on 17 and 19 minutes as Carrick took the lead but Byrne converted a monster free from his own 65 to tie the scores.

Byrne’s long range freetaking led to another point before Carrick broke up a dangerous Blayney attack with a big hit on Byrne but then lost the sliothar, Fergal Rafter pointing from distance on 28 minutes.

A third foul on Goldrick led to another Cunniffe free but Peter Treanor drove a point from the middle of the park to give Castleblayney a 0-6 to 0-4 halftime lead.

The gap was narrowed with a soft free when the Castleblayney keeper was called for over-carrying after shipping a heavy hit, Cunniffe driving over the bar but the game changed four minutes in when a block on a Mark Treanor shot saw the ball fall short for keeper Declan Molloy to clear.

Treanor charged back in as Molloy was unable to gather cleanly, the keeper losing the ball and then fouling Treanor as he fought his way to goal. Hugh Byrne stepped up for the penalty and cleverly drove the ball into the astro-turf surface in the square, the sliothar bouncing over Molloy’s hurl and into the net.

Byrne then scored a brilliant point from out near the halfway line under huge pressure and it looked as if Castleblayney were on the way to a clear victory.

But something stirred inside of Carrick and a block on a Colm Moreton goalbound shot that led to a 65, converted by Cunniffe, got the big Carrick crowd going. Peter Treanor replied with a huge point from the middle of the park but incredibly, with 19 minutes to go, that proved to be Blayney’s last score of the game.

Cunniffe converted a free for a foul on Colm Moreton two minutes later before a long ball saw Stephen Goldrick make a wonder catch, the sliothar was worked back to Liam Moreton but his powerful shot got a deflection but still needed a wonder save to prevent it from landing up in the net.

Carrick finally got a scorer other than Cunniffe after 48 minutes when Goldrick fielded a long free and blazed over the bar to cut the gap to three points. Unfortunately the scoring rate slowed as Conor Beirne was inches wide and Cunniffe had two bad wides.

Cunniffe did get a score from play when he broke through a tackle after appealing for a free but continued on to score with less than two minutes to go. Sub James McNabola gave an indication of Carrick’s bright future when he made a great catch and produced an equally great score in the first of three minutes of added time.

Unfortunately that was as close as it got as Castleblayney held firm under pressure, Carrick’s last chance a sideline ball from Cunniffe that was ruled a square ball as the Leitrim and Connacht champions went searching for what would have been a deserved equaliser.

Despite the loss, Sunday was still a great day for hurling in Leitrim and Carrick in particular. Certainly with the young players that are coming through, there is no reason to doubt that this team cannot go on and win multiple provincial titles in the years ahead.

Carrick will be hurting right now, and rightly so, but there is so much to take from a marvellous campaign and the future is very, very bright.

Main Man: Hugh Byrne was the key player in the contest but Clement Cunniffe wasn't far behind with an amazing performance. Stephen Goldrick was unmarkable at times and a real danger in attack. Cathal McCrann was solid throughout while James Glancy, Colm Moreton and Hughie Glancy all roared into the game in the second half.

Talking Point: Did the occasion get to Carrick? Only when Castleblayney got their goal did the Leitrim champions seem to throw off their shackles and play with the pace and intensity we know they can. It is a trait the footballers share so you wonder if it is something in our Leitrim DNA?

Turning Point: Not one but two - had Declan Molloy cleared his lines, there would have been no crucial penalty and only for a deflection off the back of a defender, Liam Moreton would have had a goal.

Ref Watch: Dublin official Sean Stack did a good job - he was consistent with his calls, was unlucky not to see one off the ball clash but made the big calls correctly.

Highlight: James McNabola's superb point was a stand out moment but most of all, the roars of the Carrick crowd in Cusack Park will live long in the memory.

Lowlight: A lacklustre first half performance and some costly misses at crucial times really cost Carrick in this contest. It is hard to avoid the feeling of what might have been here.