PBs and injury for Gerard as Breege impresses in Belfast 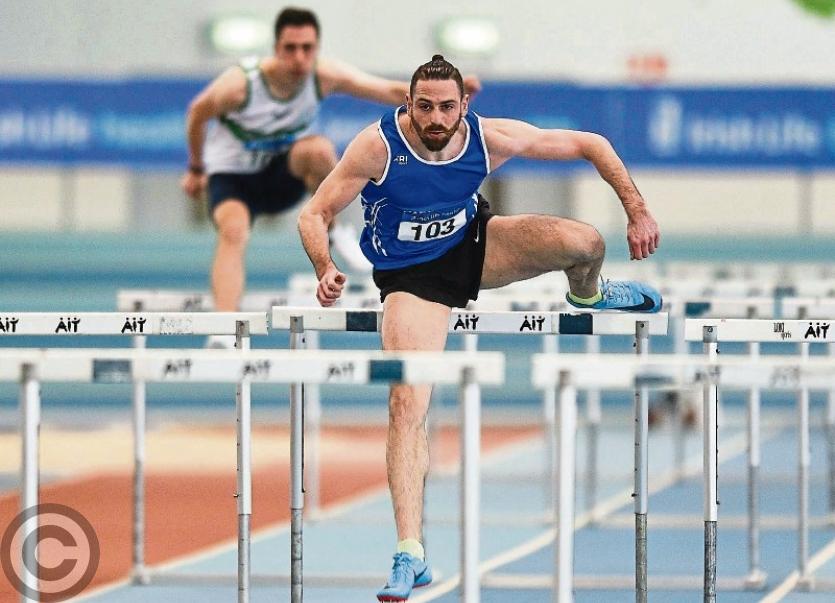 Mixed fortunes for Leitrim’s top athletes over the weekend with both Gerard O’Donnell and Breege Connolly delivering top class performances in Athlone and Belfast.

Carrick AC’s Gerard O’Donnell set the fastest time of 2019 in the 60m Hurdles when he clocked 8.06 at the Irish Indoor Multi Events championship in Athlone, jumped the second best high jump and fourth best long jump of the year.

Competing in his first multi-event since an Irish Schools event at an U17, Gerard smashed his pbs in the long jump, shot and high jump but unfortunately it came with a price as a calf tear while attempting 2.04 in the high jump meant he had to withdraw from the competition.

At the time, Gerard was lying second in the rankings and even after he dropped out, the points totals of the second placed athlete after five events did not exceed Gerard’s total after four. The injury is likely to rule him out of action for a couple of weeks but the Carrick AC hurdler is hopeful of a quick recovery.

Up in Belfast on Saturday, Breege Connolly produced a great performance to finish first Over 40 and 20th overall in the Belfast International Cross-country. The Kinlough woman was in action for Ulster/Northern Ireland team and ran a time of 29.20 for the demanding 8Km and was the fourth Irish runner across the line.

The Leitrim Indoor Athletics Juvenile Championships take place in Carrick-on-Shannon Complex (beside secondary school) on Saturday next January 26, starting at 12 noon. Entries will be taken from 11am and entry fee is €4 per competitor. The list of events is as follows: Please note that relays can only move up one age group.

The sixth Annual Streets of Ballyshannon 5k Road Race takes place this Saturday January 26, at 11.30 from the Lakeside Centre and this year finishes at East Port.

This is one of the first 5ks in the early part of the New Year and is an ideal event for people to check on their fitness levels in a competitive environment at end of month one in 2019.

Registration at Lakeside from 10am until 11.15 and no entries will be permitted after 11.15. Cathal Gallagher of RTE's Operation Transformation 2019 will perform the official countdown and fire the start gun to get runners and walkers on their way. Further info from Joe Flannery at 087 2969454 or Martin O'Halloran at 087 2507609 or on Ballyshannon Rugby Club Facebook Page.