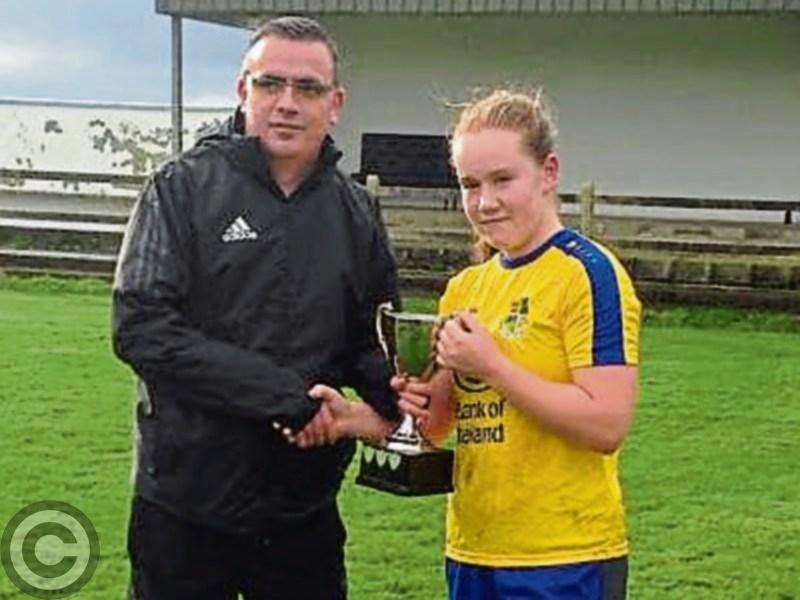 St. Clare's CS captain Muireann Devaney is presented with the Connacht U17 Cup

Up against Mayo’s Lacken Cross in the Connacht U17 FAI competition, the Muireann Devaney captained side stormed to a 2-1 victory that was celebrated wildly by the Manorhamilton players.

Devaney is, of course, an Irish Soccer International while Hannah Johnston has represented Connacht in rugby while Leah Fox has played for county underage teams and at Senior level for Glencar/Manorhamilton.

It means that the girls team from the Manor school have won Connacht titles in Gaelic football and soccer in the past 12 months.

U17: Manorhamilton Rangers U17 team had an emphatic victory against Real Tubber to put their league campaign firmly back on track. This was their best performance of the season with all players contributing to a brilliant display of controlled defensive and attacking football.

Manor dominated nearly the entire game with Manors keeper Iarla Reagan a bystander for the majority of it.

Manor should have scored on numerous occasions in the first half but found the Real Tubber keeper in brilliant form. Amazingly Real Tubber took the lead from their only opportunity after 25 minutes when a rocket of a shot from twenty yards out sailed into the Manor net.

Manor to their credit came out in the second half exactly as they started the first and equalised through Jack Faulkner who unleashed a stunning shot from a tight angle on the left wing.

Moments later Matthew Connolly cross landed at the feet of Cathal Og O'Connell who shot straight to the bottom corner to put Manor 2-1 ahead. Manor piled on the pressure with Cathal Og O'Connell shot forcing the Tubber keeper to parry the ball into the path of Darren Gilmartin who made no mistake firing the ball to the net for 3-1.

Manor continued to pile home the goals but their final score was worthy of any match as Cathal Og O’Connell beat four defender to score.

U16: Manor Rangers U16s stay top of the league table following a comprehensive 5-0 win over St John's. Manor got an early goal when Tarach O Snodaigh finished brilliantly into the top of the net.

The second goal came after Alan Kavanagh was taken down in the box, Eanna Clancy dispatching clinical to the net. Another goal followed just before halftime from Gabriel Gilbride as Manor were in control.

The second half saw Manor go close early on with two chances by Muireann Devaney and Conor Dolan but they got their reward when Matthew Connolly and Kavanagh struck for late goals.

SFAI U16 Cup: Next Sunday’s game in Cobh against Cobh Ramblers will be broadcast live on the club’s Facebook page in conjunction with Tangles Hair Salon and Cleary Landscapes. Thanks also to Springfield Ramblers for allowing us to broadcast the game,

Senior: Manor Rangers were on form, red hot to take all three points at home to Ballisodare United who forgot to read the script. Ten minutes into the first half and Ballisodare were awarded a penalty that Andrew Patton dispatched to the back of the Manor net.

Manor Rangers hit back a minute from half time when James Glancy fired home a superb equaliser and it was all to play for. Ballisodare were on the front foot when awarded a free kick 27 minutes into the second half.

Ballisodare took the free quickly catching the Manor Rangers defence napping and Adam Grace was on hand to smash the ball into the Rangers net that in the end took all three points for the Boys from Ballisodare.