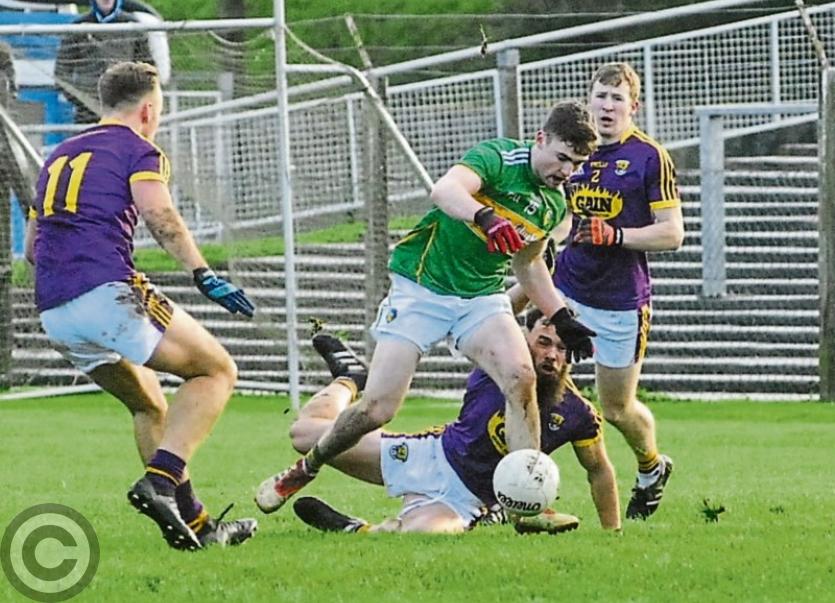 Surrounded he may be but Ryan O'Rourke still manages to win possession and a free for a Leitrim score last Sunday in Avantcard Pairc Sean Mac Diarmada. Picture: Willie Donnellan

Hard to know what to lead with, even three days later - Leitrim's wonderful statement win over Wexford last Sunday or a superlative display from Ryan O'Rourke.

The optimism that surrounded Terry Hyland's first Allianz League game last Sunday in Avantcard Pairc Sean Mac Diarmada has blown into full-on hype after a victory that lifted the hearts of all Leitrim fans.

A tally of 3-15, all but six points coming in the second half, and a Green & Gold team playing with confidence and authority would seem to suggest that Terry Hyland might have the magic touch as the hype and excitement have come back to Leitrim football.

Truth to tell, Hyland's magic touch may very well be real as a lethargic and nervous looking Green & Gold were transformed in the second half, simply blowing away what had been, up to halftime, a dominant yet wasteful Wexford off the field in the second half.

From what whisperings we've heard, a blistering scolding from Hyland and his backroom team sent Leitrim out in the second half with fire in their bellies and it certainly worked as Leitrim were much more intense and far more energetic around the field.

Yet, yet, yet - in a game that turned on tiny margins, you have to wonder what would have happened had Ryan O'Rourke not chased what looked like two lost causes early in the second half.

Shane Moran turned to celebrate a point three minutes into the second half when his effort should have gone over the bar. It didn't! Crucially O'Rourke chased the lost cause, won the ball after it rebounded off the crossbar, was hauled down, picked himself up and drilled the resulting penalty to the net.

So inspiring was that goal that Leitrim decided to repeat it a minute later as, from almost exactly the same spot, Shane Moran again dropped a shot short - the only difference was O'Rourke arrived in like a rocket to fist the ball to the net.

The perfectionist wonders about the fortune involved in two shots that should have gone over the bar ending up in goals, the realist impressed by O'Rourke's refusal to give up a lost cause, reaping huge dividends for player and county - never truer is the phrase you make your own luck!

Even without the two goals, O'Rourke had delivered a masterclass for Terry Hyland so much so that is almost certainly a marked man from now on. And that may be a worry for when Leitrim were struggling, O'Rourke was the sole player making things happen for the Green & Gold.

Credit keeper Diarmuid McKiernan too with his role in Leitrim's dramatic turnaround. He stood firm, took a huge knock when punching clear a ball into the goalmouth. From that clearance, the ball went down the field for Moran's fateful miscue.

Lest anyone think we're being harsh on Moran, the Ballinamore man had already set the tone early in the second half with a more energetic start to get Leitrim up and running and his transformation was typical of what we witnessed all over the field.

Terry Hyland has preached the value of confidence and it hit you right in the face last Sunday - players that had played second fiddle before the goals were transformed, an extra yard of pace suddenly appearing as Leitrim bossed the rest of the game to show what they are capable of.

Leitrim got off to a hot start - two O'Rourke free in the first five minutes quickly gave the impression he was unmarkable but it was Wexford who took over, hitting five unanswered points from Cathal Devereux, Conor Devitt & Jonathan Bealin (3).

Wexford missed chances to really put their authority on the game and a foul on O'Rourke and free from O'Rourke sparked a revival, Jack Heslin sprinting in to fist the ball over the bar after good work from Shane Quinn.

Bealin and O'Rourke would swap two points apiece before halftime and there was no doubting that worried Leitrim fans were thrilled to be just a point in arrears at the break.

Ray Mulvey's strong run led to an early goal before O'Rourke struck for two goals inside a minute, as described earlier in this report. Jack Heslin followed up with a point and suddenly Leitrim were seven points clear of a shell-shocked Wexford.

Bealin and O'Rourke swapped scores but Leitrim killed off the game 12 minutes into the half when Dean McGovern shrugged off his man and found sub Darragh Rooney with a pass across the square for a fisted goal.

Leitrim's confidence soared as Mulvey & Moran matched points from Bealin and sub Ben Brosnan. Bealin put over Wexford's last score with seven minutes to go as they enjoyed lots and lots of possession but could break down an energised Leitrim defence.

Leitrim's subs then got going with both Gary Plunkett and Eoin Ward virtually scoring with their first touches while Cillian McGloin fisted the ball over the bar while Domhnaill Flynn added a free.

It wasn't one way traffic - Diarmuid McKiernan made a superb save from John Turbitt with 15 minutes to go while Shane Quinn earned himself a silly second yellow card nine minutes from time, nothing to truly stop Leitrim's march to deserved glory.

Main Man: Only one real contender - Diarmuid McKiernan made an absolutely vital save when the scores were level but has any one player had such an influence on a Leitrim game in years as Ryan O'Rourke had last Sunday?

Talking Point: Long derided for having no forwards, Leitrim now have a potent forward line capable of racking up big scores - 3-15 here, 2-13 against Mayo and an incredible 25 points against Louth last summer. Long an Achilles heel, Leitrim  have real talent in attack now.

Ref  Watch: Kildare's Brendan Cawley might have let over-carrying, from both teams, go a little bit but Cawley did a good job overall, made the big decisions and had a good game.

Highlight: Leitrim's complete dominance of the final 30 minutes was a joy to behold and certainly gives you confidence for a promotion push in this campaign.

Lowlight: In the joy of victory, it's easy to forget that this game changed drastically with two shots that didn't go over the bar. Leitrim were disjointed and looked lacking in confidence until O'Rourke hit two goals - it is something that needs attention.