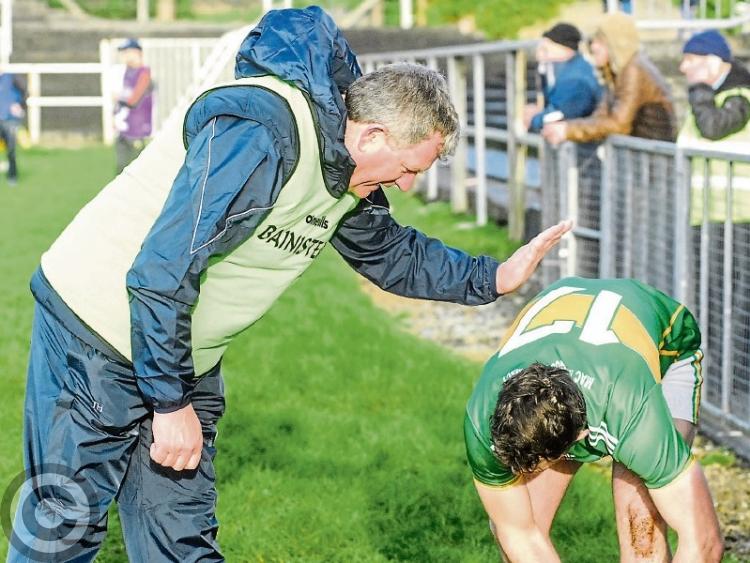 Leitrim manager Terry Hyland literally gives sub Gary Plunkett a pat on the back before he is introduced to the action last Sunday in Avantcard Pairc Sean Mac Diarmada. Picture: Willie Donnellan

Terry Hyland may have been playing down Leitrim’s chances a few weeks ago but there was no doubting where his ambitions lie when he says “There is still five more games we have to win to get to where we want to be.”

Hyland’s charges had just turned in a stunning second half display that landed a tally of 3-9 in the second half against Wexford but you sense that the Leitrim manager’s dreams and ambitions are a lot larger than what he has previously said.

His comment came as he chatted to the Observer about the possible importance of scoring difference at the end of the League and you can see his ambition in targeting wins - “There is still five more games we have to win to get to where we want to be and at the end of the day, it is in our own hands.

“They have to believe in themselves, they have to push on. It is always healthy to have that - at the end of the year, it could make the difference in getting to where you want to be.”

Even when it was put to him that it was a positive start and something to build on, Terry commented “A good first day - well hopefully.”

Confidence has been a recurring theme for Hyland since taking over the Leitrim job and it was never clearer than last Sunday when Ryan O’Rourke’s two goals sparked a transformation in the entire Leitrim performance, something their manager wants the players to buy into regardless of how a game is going.

“That’s the way it is - I keep telling lads it is their heads that tell their legs not to run, it is not the other way around,” stressed Terry, “Of course it is confidence, we got confidence from the Mayo game and we’ll get confidence from the second half display we had today so hopefully we can just build on that.”

Nevertheless that second half performance was only a confirmation of what Hyland is seeing on the training field - “I think when we got out in the second half, we started to play the football that we are capable of, we didn’t play it in the first half, I thought we played within ourselves, we were holding ourselves back and perhaps it is old habits that we need to get shaken out of them.

“It was important that we kept it close up to halftime and the scoreline was probably a reflection of where the game was in the first half. We started bright, we had a very, very bad 10-15 minutes and then I thought we came back a little bit towards the end of the first half.”

Hyland may have agreed that Ryan O’Rourke delivered a towering performance but the Leitrim boss saw plenty of other big performances against Wexford, even highlighting the second half showing from Ballinamore’s Shane Moran.

“Ryan is a fine footballer but there is other good lads out there,” stressed Terry, “I thought Shane Moran, who had probably a poor first half, had a very good second half and there were other lads who stood up and pulled us back across the line.”

And the Leitrim manager stressed that battling and fighting for every ball, every minute of the game is key in League football - “I think in Division 4, it is always going to be working hard for it, it is not going to be a case of you’re going to get that opportunity to play with flair especially this time of the year because pitches are going to be heavy.

“Conditions in the first half were quite poor, I think we had rain before the game and it left it a little bit heavy. Perhaps the referee was a little bit fussy in the first half, he was probably fussy with both sides, I’m not saying he was against Leitrim by any manner or means, but what would be let go in a Division One wasn’t being let go here today.”