Hurlers out of luck in Cavan shock 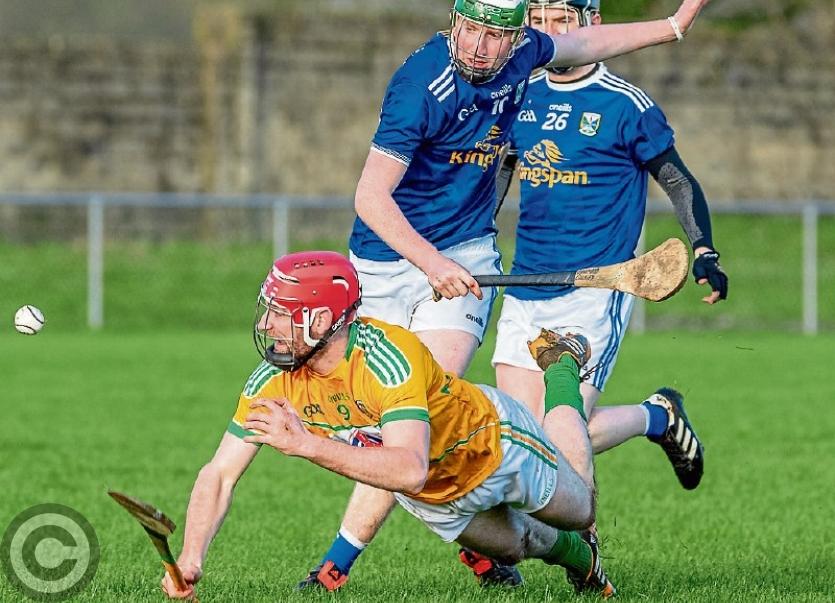 A diving Liam Moreton gets the sliothar away despite pressure Picture: Stefan Hoare/Sheelin Photography

Leitrim’s battling display in last Sunday’s NHL Division 3B clash in Ballyconnell came to nothing when they were caught cold at the death by two Cavan sucker punches after being forced to play for almost the final half-hour with just 14 players.

Martin Cunniffe’s charges had looked odds-on favourites to grab both points on offer after Cathal O’Donovan’s 68th minute, over-the-shoulder point, left Cavan trailing by a single point. However, the hosts had a sting in their tail, notching two unanswered injury-time points to nick the spoils.

Cavan got a pre-match injection of confidence with the news that Carrick-on-Shannon and county talisman Clement Cunniffe was ruled out of the tie due to illness.

In fairness, Cork native Ben Murray took up the gauntlet in Cunniffe’s absence and did his best to keep the scoring ticking over for last year’s Div. 3B beaten finalists.

But the Gods seemed intent on helping Cavan Hurling Inc. write another positive chapter and when Liam Moreton got a straight red card - following a lengthy consultation process between the officials - for striking his Cavan opponent off the ball just eight minutes into the second half, the script assumed a battered if not yet torn up look.

In challenging conditions defined by a very yielding sod which played host to a covering of grass (several inches too long for any sport) greased by spitting rain, Leitrim enjoyed the lion’s share of possession in the first half and must have harboured hopes of at least aping if not repeating their emphatic (6-21 to 3-7) victory in the corresponding tie last year in Carrick-on-Shannon.

But when Hugh Briody’s opportunist goal steered Cavan into a rather flattering 1-1 to 0-3 lead, the word contest could be heard ricocheting from the small but atmospheric stand.

For all the ominous notes reminding the visitors of their obligations, Leitrim always looked the more dangerous going forward and they somewhat predictably found the net in the 34th minute via Stephen Goldrick’s fierce ground stroke.

However there was trouble brewing and the subsequent dismissal of Liam Moreton was to prove critical; a real leveller for Cavan and, simultaneously, a ball and chain for Leitrim.

Still, Leitrim’s attitude and hunger couldn’t be faulted and they never gave the impression of a team sucked in by the pre-match odds or their hitherto unequivocal superiority over the Breffni hurlers.

Indeed, the long-time leaders showed all the eagerness of a side anxious to embellish a 1-7 to 1-2 interval advantage but when an inspirational long-range point (39) from Diarmaid Carney cut Leitrim’s lead to just three points, the match favourites’ belief if not resolve seemed shaken.

Thereafter a great solo goal (49) from sub. Cillian Sheanon bolstered Cavan’s cause further, steering them into the lead (2-5 to 1-7) for the first time in the match.

On cue, Corkonian O’Donovan whipped over a fine point after Cavan failed to properly clear a long delivery to restore Leitrim’s lead.

Cavan refused to lie down though and Cuala’s erstwhile All-Ireland club SHC medallist John Sheanon (one of three brothers to feature) split Leitrim’s posts from play in the 71st minute, after a neat pass from brother Colum, to level matters once more.

Cavan had all the momentum as they went for broke but long distance wides from John and Colum Sheanon looked set to let Leitrim off the hook.

Luckless Leitrim remained up against the ropes and after Mark Moffatt was fouled, John Sheanon was gifted another free in the 72nd minute. Some afters which saw Diarmaid Carney barged into prompted referee Brady to move the ball on making the free a much more manageable proposition for John Sheanon. With ice in his veins, Cavan’s most effective ‘permit player’ on the day duly arrowed his 31 metre free over the Leitrim bar for what proved to be the winning point.