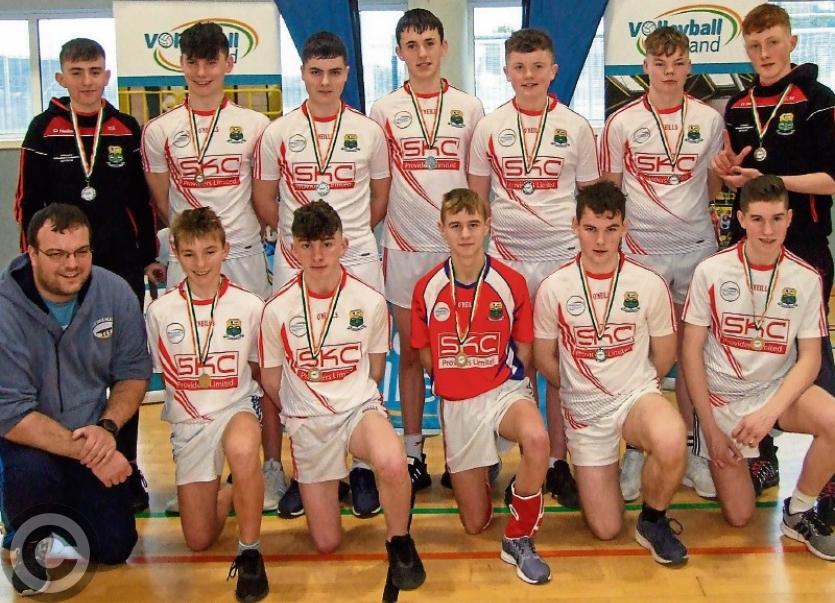 The Drumshanbo VS team who won silver medals in the Schools National Volleyball Cadette A Final.

In the end, St. Flannan’s Ennis, with their five Irish Internationals, duly won their first ever A All Ireland in Volleyball when defeating Drumshanbo Vocational School in last Wednesday’s Final in Kilkenny.

But the young, seriously depleted Drumshanbo gave a stunning second set display to level the match. This deprived Flannan’s of their 100% set wins record in the competition. (Last school to achieve it was Drumshanbo in 2015/16)

Nerves truly got the better of the Leitrim school as they went 0-7 down at the start. Brendan Gunning with a well-placed volley down the line finally broke the Ennis serve. Evan Foley got the first block.

It was Gunning again that gave Drumshanbo their first score on serve, thanks to a Cathal McGourty block. The referee was very harsh on touch, particularly on Drumshanbo. Two strong McGourty serves paved the way for a perfect pass from Ronan Moran to Foley, who set Radaslaw Oberwan to hit a winner at 6-11.

Young Ciarán McMurrough came on and set well but this reduced Drumshanbo to a single blocker. Foley aced twice to bring it to 9-17 but Flannan's took the set easily.

The second set, with Ronan Moran back on, was gripping. Drumshanbo’s defence was suddenly excellent. It started with saves from Radaslaw Oberwan, Foley and three from Ronan Moran as McGourty blocked three times.

Then it was the turn of Libero, Seán Moran, to save, followed by a great reach from Foley and Drumshanbo went 6-2 ahead. A Gunning ace at 7-2 caused an Ennis time out. Strong McGourty serves and further Ronan Moran and Gunning saves brought it to 9-6.

Then, after Foley aced to 11-6, Flannan's launched a huge comeback to lead 12-11 as Drumshanbo’s younger players were not in form.

Finally, as they trailed 12-15, Drumshanbo hit back with spikes from Gunning and Radaslaw Oberwan. Ronan Moran saved, flicked a winner and served 3. Sean Moran again came to the rescue and Foley flicked another winner to regain the lead at 19-18.

McGourty aced twice, Foley spiked a winner and Radaslaw Oberwan placed one in the corner, to leave it 23 -18 for the Leitrim school. The set ended very bizarrely as the very strict referee pulled both teams twice for foul touches but Drumshanbo had levelled!

An early save from Sean Moran and a winning volley from Gunning left it 2-2 in the third set, but then came nightmare serving from Flannan's to leave it 13-2! Conor Flood started this set, but, despite one great flick over was not really recovered from his hand injury sustained after the semi-final.

It was 5-14 before Radaslaw Oberwan blocked Drumshanbo’s first winner and, helped by another Gunning flick, he served Drumshanbo to 8-20. Arkadiusz Oberwan came on and set well. Gary Corcoran hit Drumshanbo’s final winner of the season at 12-24, but, for the first time in 10 years, there was brand new champions.