Colin wins Trim 10 by a distance 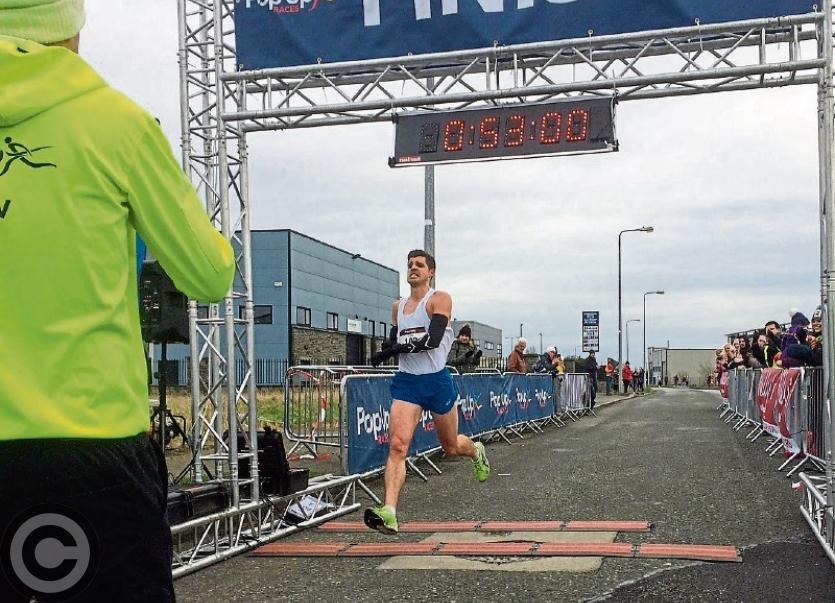 Colin Griffin crosses the line to win the Trim 10

Ballinamore's Colin Griffin showed his preparations for the Rotterdam Marathon are right on track when he led home 1,500 runners to win the Trim 10 Mile road race last Sunday.

The former Olympic walker came home a clear winner in an impressive time of 53mins flat, taking the lead before the midway point. Colin had 45 seconds to spare over James Doran from the An Riocht AC with John Weldon from Newbridge AC third in 54:21.

Griffin clocked an incredibly fast time on a hilly Dublin course last October and will be looking to go much faster in Rotterdam.

Former London Marathon champion and European Cross-country winner Catriona McKiernan led home the women's race in the colours of Annalee AC, the Over 45 athlete clocking a time of 60.02. Representing Annalee AC Caitriona won the overall female race in a time of 1:00:02.

Carrick ACs Emily O'Brien ran 1:19:47 for the distance while Chris Daly, a former sprinter with Carrick AC, clocked 1:08;33 and Gerry O'Brien was also in action.

The race also had another connection to Carrick AC with former cross-country international Padraig Farrell from Annaduff acting as race director for an event that is rapidly becoming one of the premier 10mile road races in the country.

Sponsored by Nally's Supervalu, Trim and with participation capped at 1,500, registration closed before the start of 2019 for what many social and serious runners use as a sounding board ahead of planned spring marathons.

Carrick CS's Emily Reynolds finished seventh in the Minor Girls, Fionn O'Brien eighth in the Senior Boys while Lauren Reynolds also made it through to the Connacht Finals on Saturday February 16, in Loughrea.