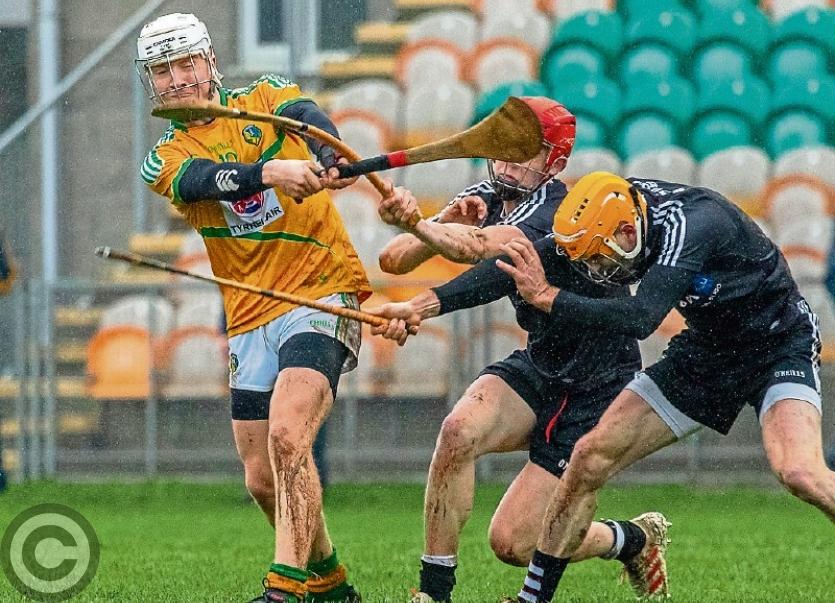 Leitrim’s hopes of reaching the Allianz League Division 3B Final for the second year in a row suffered a hammer blow on Sunday when Sligo inflicted a one point defeat on a 13-man Green & Gold.

Despite losing Fergal Earley and James Glancy to red cards, it was Sligo who held on for the narrowest of wins over a battling Leitrim outfit that pushed the Yeats men all the way in a damp Avantcard Páirc Seán Mac Diarmada encounter.

Leitrim lost Fergal Earley to a red card just four minutes into the game but it appeared that Leitrim might overcome Sligo’s numerical advantage when they grabbed a three point advantage, which they held until the 22nd minute.

The dismissal of James Glancy shortly after half time left Leitrim with a mountain to climb as they trailed by eight points coming up to the midway point of the second half yet, incredibly, it was Sligo who were hanging on at the end as Leitrim outscored their neighbours by nine points to two.

The loss was Leitrim’s second one-point loss of the campaign, conversely it was Sligo’s second one point win - on such small margins are leagues won and lost.

It was tit for tat in the opening exchanges, with Sligo’s Eoin Comerford from a free and Leitrim’s Gavin O’Hagan from play trading points before two minutes had elapsed before Ronan Cox put Sligo back in front when he split the Leitrim uprights with his third minute effort from play.

Leitrim suffered their first hammer blow in the next minute when Fergal Earley was red-carded for his retaliation on Sligo’s Gary Cadden, who received a yellow card for dangerous play in the incident.

It was all square once more when Clement Cunniffe tapped over a seventh minute free and the veteran Carrick marksman put Leitrim in front for the first time almost immediately when he found the range from another free.

Sligo netminder Kevin Brennan was forced to make a smart save from a 10th minute Cunniffe shot, which he deflected out for a ‘65’ which Cunniffe pointed to stretch Leitrim’s lead.

Despite being a man down Leitrim were going great guns at this stage and Ben Murray put them three points up when he fired over the Sligo bar with a 12th minute effort.

Over the next five minutes Sligo’s Eoin Comerford and Cunniffe swapped points but Sligo dramatically got themselves into the game by the 22nd minute when an unmarked Tony O’Lynch Kelly flicked the sliothar to the Leitrim net.

Sligo got on level terms after Eoin Comerford converted a 28th minute free but Colm Moreton put Leitrim in front for what turn out to be the last time in the match two minutes later when he pointed from play.

Crucially, Sligo found the net again before halftime when a 36th minute goalmouth scramble saw the Yeats men retake the lead for the first time in 29 minutes when Kevin O’Kennedy finished the ball to the Leitrim net.

Clement Cunniffe and Sligo’s Eoin Comeford hit over frees prior to the break that left the visitors leading by 2-5 to 0-9 at halftime.

After the restart, Sligo went further ahead by the 40th minute with two points from Kieran Prior and one from Gary Cadden as Leitrim sub Aaron McDermott received a yellow card in this period.

More destructive was the yellow card James Glancy was issued with in the 41st minute and two minutes later, the long serving Carrick man was dismissed when he saw yellow again shortly after.

Losing the influential Glancy was a big enough blow but with a 15 to 13 player numerical advantage, Sligo turned up the pressure now and edged further ahead by the 46th minute after O’Kelly Lynch and Comerford put over two frees.

A 50th minute Cathal O’Donovan point, Leitrim’s first of the half, reduced Sligo’s advantage to six but the Sligo men again upped their game and went eight points up after Eoin Comerford and Gary Cadden whipped over a point apiece.

However Karl McDermott and Cunniffe cut Sligo’s lead back to a two goal margin by the 53rd minute with points from play and a free.

O’Kelly Lynch answered those scores with a 54th minute point to leave Sligo seven clear but Leitrim suddenly found their form over the next nine minutes as their brave response cut their opponent’s lead to the minimum.

Cunniffe put over his second ‘65’ of the day and converted four other frees while Karl McDermott also chipped in with a point but as the game got into the closing stages, Stephen Goldrick received a 67th yellow card.

Leitrim’s determined fight back was halted when O’Lynch Kelly fired over a 69th minute point, his side’s first in 16 minutes as Leitrim finished with a late Cathal O’Donovan consolation point.