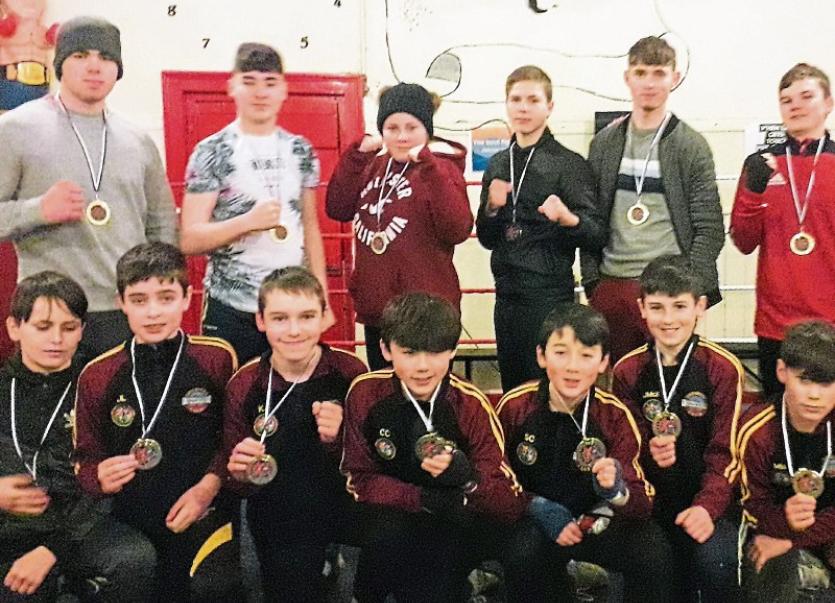 Drumsna Boxing Club had a very successful outing to the recent Connacht Novice Championships in Castlerea over the last two weekends of January, coming home with 10 Connacht champions out of a total of 15 boxers entered by the club.

In a short space of time, Drumsna Boxing Club have moved from strength to strength under the experienced eye of 14 time national champion Sadhbh Greene and her dad Dermot, himself and experienced and titled boxer as the club is moving forward aiming for the top at all times.

In the first weekend of finals, first into the ring for Drumsna was Sean Crowley who sailed through his final with his usual style and pace showing his exceptional class against an experienced opponent. Next up came Joe McKeon relaxed as always whose composure and accuracy ensured him the top spot.

The second weekend of finals kicked off with boy 2, Conor Crowley, who mirrored the success of his younger brother Sean. Although this contest was a more bullish affair, Conor showed excellent heart to have his hand raised in victory after showing brilliant displays of boxing in both his semi final and final.

Kai Johnston was next up to wear the Drumsna vest and he did so with pride. Kai left absolutely everything in the ring and, to the delight of his coaches and supporters, had his hand raised in victory.

Kai has come on in leaps and bounds over the last twelve months and is most definitely a name to watch out for in the future.

Darragh Breen followed up next, adding to his 100% record in a hard fought battle which saw both boxers never giving up over the three rounds. Darragh is an exceptional young lad and is proving to be a naturally talented boxer.

The club’s second set of brothers were up next - the younger Sherlock, Quentin, won his bout with a show of strength and skill. His older brother Jared fought in the final bout of the day and the rangy southpaw was as cool as ever, sailing through his final with style and control using his height to his advantage and showing us his exceptional talent and skill.

A word of praise for boy 2 finalist Jason Lynch who showed a brilliant display of guts and fitness against a much more experienced opponent. Jason lost out on a split decision proving it was a bout that really could have gone either way.

The same fate came for Marc Bonnici who again fought with guts and gusto . unfortunate for Marc not to get the win but his day will come.

Jamie Walsh, new to sport after having only laced on the gloves in the last few months, performed well and with time and more experience Jamie will be battlign for the top spot.

The club also claimed three champions by walkover - John Stokes, Caoimhe Moran and Jason Sherlock. They mightn’t have had an opponent on the day but all three had put in the hours in the gym and on the road all were ready and prepared.

Drumsna's remaining fighters Conor Hawksby and Roy Brannigan didn’t make it out of the first round this time but both are names to watch for in the future.