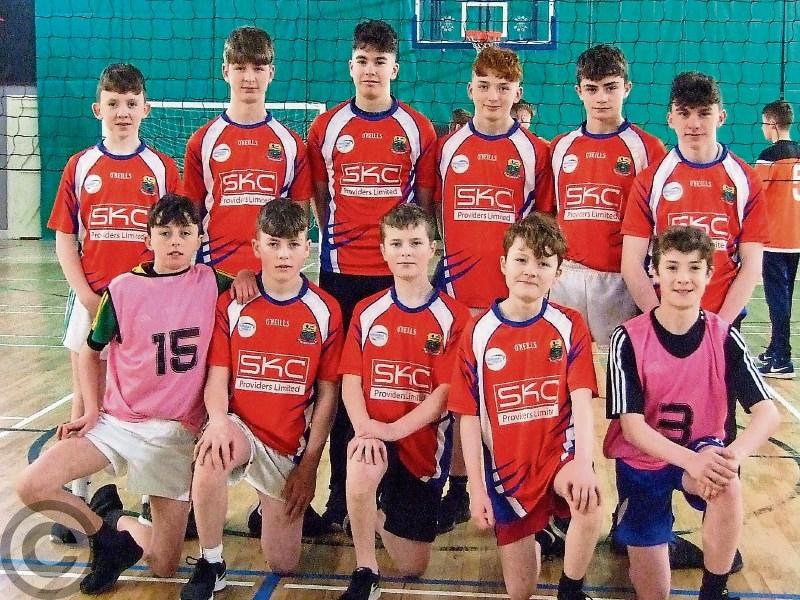 The Drumshanbo VS junior boys volleyball who topped their rankings section

Eleven more Drumshanbo volleyballers made a successful debut at Junior Volleyball on Friday when, in Drumshanbo’s Mayflower, they beat three Elphin teams and qualified for the National Junior A competition.

The first set of this was the set of the day. A very raw Drumshanbo came up against a very well organised and drilled Elphin. After leading 4-1, Drumshanbo soon found Elphin racing into 9-4 and 11-7 leads. The sides were then level four times, from 11 to 17.

With many players at sea, it was Karl Foley who matched the control skills of Elphin to serve Drumshanbo two ahead at 20 -18. Elphin caught up again at 20-20 but Drumshanbo had settled.

Elphin again started well in the second set leading 4-1 but Karl Winters broke the Elphin serve with a spike and hit three aces to give Drumshanbo a 6-4 lead and they raced ahead.

The game finished with a great combination from three very inexperienced players. Owen McCormack managed to control a difficult serve. TJ McGovern got to his ball and sent it high in the air and Michael Connolly finished it down on the far side.

This was a thriller. Elphin B were very young but rallied very well. Indeed, they were leading 6-3 when a good volley from Cathal McNamara broke their serve and Drumshanbo came back to level 6-6. Elphin again raced away 11-6.

McNamara set up Guckian for a winner and Connolly’s serve got it back to 10-12. Guckian’s serve got Drumshanbo leading at 15-13, but Elphin led again 16-15. Finally, Winters served Drumshanbo to 20-16 and they never looked back.

Then it was McMurrough’s serve again. McMurrough, whose general play had kept Drumshanbo in lots of rallies and who was utterly selfless in passing the ball, served powerfully through two Elphin timeouts, and the match was won for Drumshanbo.

Elphin C were totally at sea in the first set. Cathal Guckian had a field day, serving 10 in a row, with one winner coming from a shooting volley from James Rynn. Caolán O’Connor, who had starred in the first set of the day, unleashed a very powerful serve and bought the score from 14-5 to 25-5.

The second set was long and neither side ever got a run of serves. Dean Cornyn made the difference. Steady on the touch, he opened up 10-6 lead on his serve and, when Elphin rallied to be only 15-18 behind, he pushed Drumshanbo to 20. Elphin fought all the way but Drumshanbo kept their clean sheet.