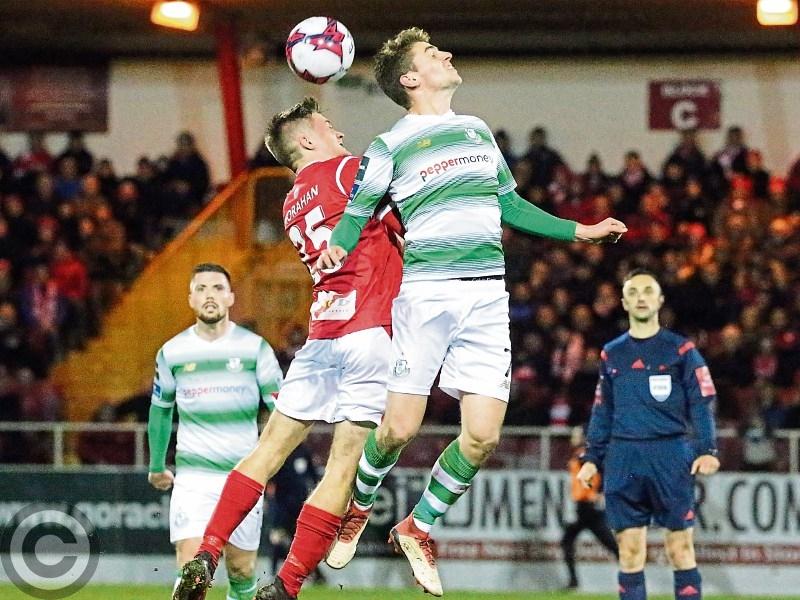 The 2019 SSE Airtricity League gets underway this weekend and there will be plenty of local interest as Leitrim Village’s Niall Morahan will be looking to become a more regular fixture in the Sligo Rovers team.

Having starred for the club’s U17 and U19 teams, Niall made the step up to the senior side last year, initially featuring on the bench before he was introduced for his league debut away to Limerick.

In what was a turbulent season for the club, the bright spark was undoubtedly the number of young players who were given an opportunity; an opportunity that was grasped with both arms. John Mahon and Jack Keaney became integral parts of the first team, goalkeeper Ed McGinty and midfielder Liam Kerrigan also impressed while Niall and Darren Collins both caught the eye when given an opportunity.

After manager Gerard Lyttle’s managerial tenure came to an end it proved to be a challenging end to the season with Niall and his team-mates experiencing a particularly difficult evening in Oriel Park when he was introduced as a half-time substitute and played out of position in a heavy defeat.

However that was soon forgotten when he made his first competitive start for the Bit O’Red in the final game of last season, a win over Shamrock Rovers.

Looking ahead to the new season from his home in Leitrim Village last week, Niall also reflected on his breakthrough to the first team saying: “Once you get a taste of it you keep wanting more. Once you get on you think 'this is where I want to be'. After making a few appearances as a sub you are looking for that start and to finally get that start was a great experience.

“It’s always a big game when Shamrock Rovers come to town and you never want to lose. It was a great experience to play in a game like that and to beat them as well was nice.”

Niall was substituted to a standing ovation from the home supporters, recognition of his excellent performance coupled with the local enthusiasm that another local gem may well have been unearthed.

Recalling the standing ovation he received when being withdrawn Niall said: “It was a nice feeling. The fans were great, all the lads were great, full of support and I was very thankful for the occasion.”

Although a professional club, the ongoing fundraising and input of volunteers means the club has more in common with a junior soccer team or GAA club than an English Premier League outfit.

Emphasising how engrained the club is in the community Niall said: “It’s very close to it. It’s a real community club, it’s very close-knit, everyone knows what is going on. When the club is doing well the place is buzzing and there is a real feel-good factor around. Everyone knows the Rovers players and it is important for the team to represent the town and the county and surrounding counties. It is a real community club.”

A Liverpool fan who regards Steven Gerard as the type of player he would aim to model himself on, Niall has been a regular feature during Rovers' pre-season preparations and was introduced as a substitute in their final warm-up game, a 1-0 win over Longford last Saturday night. He has also been helping out with the Carrick Town U15 team and international recognition also came his way last week when he and Rovers team mate Liam Kerrigan participated in the Ireland U19 training camp.

Reflecting on his time with the Ireland camp Niall said: “Myself and Liam Kerrigan got a call up to the Ireland U19 training camp up in Abbotstown which was a good experience. I really enjoyed it, it was nice to get the call-up and it is always a nice feeling to pull on the Irish jersey no matter what.”

This Friday night sees Sligo Rovers begin the 2019 league campaign away to defending champions Dundalk. While it may be a daunting prospect, it is one Niall is eagerly looking forward to, even if memories of the last trip to Oriel Park are still very fresh.

“The last time we were up there [Oriel Park] wasn’t a great day. They are one of the best in the league and they have proven that. The club was in a bit of turmoil at the time after losing Ger [Lyttle ex-manager] and it was a tough day but hopefully we will turn it around this time.

“Obviously you don’t want to ever feel like that so you have to work harder and say ‘this isn’t going to happen this time’. We are going to try and turn it around.”

There is an influx of new players at the club for the 2019 season and Niall is optimistic when he talks about the club's and his own ambitions for the year ahead.

“A lot of lads from last year haven’t come back for whatever different reasons and lots of new faces have come in and it’s been good to meet everyone, see what they are like, get used to playing with them and everyone is really friendly and everyone is getting to know each other.

“Liam [Buckley, new manager] told us spots are up for grabs, everyone is fighting for places. I’m under no illusion that it will come easy, I don’t think anyone is. Everyone is working really hard and fighting for a spot and I think that will stand to us at the start of the season.”

A former Allen Gaels player and a nephew of Leitrim great Padraig Kenny, Niall fondly recalls being in The Showgrounds as a fan when Rovers won the league and in the Aviva Stadium when they won the FAI Cup in 2013 and is now looking forward to creating his own legacy with the Bit O'Red.

“I remember being down the time Sligo Rovers won the league in 2012 and running onto the pitch. I’ve always being going to the games pretty much since joining the club with my parents bringing me down.

“Dundalk have the money and the facilities and the top players in the country but it is up to everyone else to go out and challenge them and bring that level to their club. That’s what everyone in Sligo is aiming for, to be one of the top clubs in the country.”

“The opportunities are there as Seamus Coleman has shown. There is always someone watching, if you are playing well enough the chances are always there. I am happy where I am and happy with how it is going; it is where I want to be at the moment.”