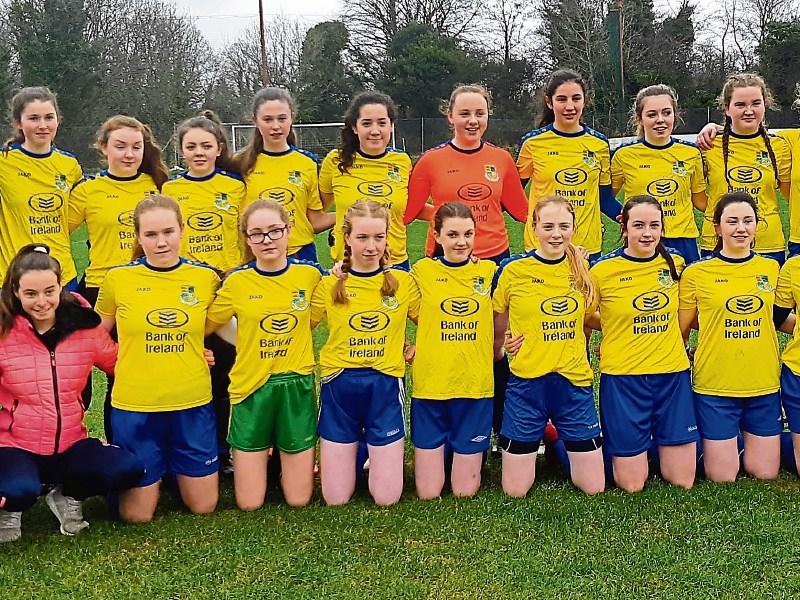 Played in Donegal town, last week’s semi-final saw a dominant second half display secure the Manorhamilton schools spot in the national final where they will face Killina Presentation school on Wednesday, February 27 in Tullamore with the kick-off scheduled for 1pm.

Muireann Devaney opened the scoring for St Clare’s with a wonderful strike from the edge of the box but despite dominating proceedings they were unable to add to their lead as both Devaney and Erin Somers were denied by excellent saves from the Coláiste Ailigh goalkeeper.

St Clare’s didn’t have it all their own way and Coláiste Ailigh equalised following a goalmouth scramble after a corner caused panic in the St Clare’s defence ensuring there was nothing to separate the sides at the interval.

After the heroics produced by the Letterkenny goalkeeper in the opening half, it was always going to take something special for St Clare’s to regain the lead and fortunately Leah Fox was on hand to provide just that.

A stunning strike from all of 40 yards gave the Coláiste Ailigh goalkeeper no chance and edged St Clare’s back into the lead; a lead they never looked like surrendering for the remainder of the contest.

If the first two goals scored by the Manorhamilton were wonderful individual strikes, the third goal was an excellent team goal.

A pinpoint delivery from Elaine McManus picked out Erin Somers who in turned passed to Muireann Devaney who dispatched her shot to the Coláiste Ailigh goal for her second and St Clare’s third goal.

Victory was secured when Hannah Johnston scored from the edge of the box.

Leah Fox came close to further extending the lead but for the second time in the game she was denied by the crossbar.

However, that miss was to prove irrelevant as St Clare’s recorded an emphatic victory to secure their place in the final.