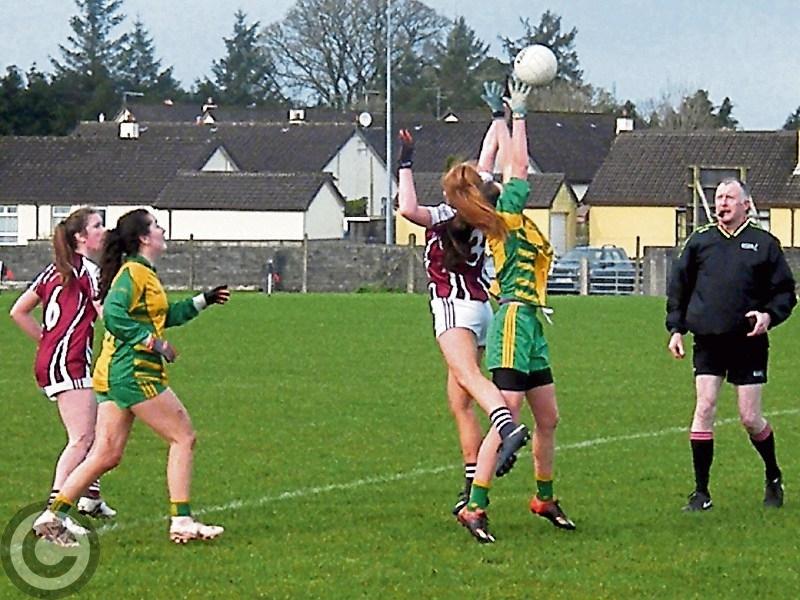 Rachel Conlon reaches for the ball after a throw-in

They might have left it late but St. Clare's CS delivered when the pressure was greatest, scoring 1-2 in injury time to snatch the Lidl Ladies Connacht PPS Junior B title from the grasp of a devastated Glenamaddy Community School.

In a thrilling game in Swinford last Saturday, the Manorhamilton school recovered from an 11 point halftime deficit to win by four points but they left it awfully late, 1-2 from placed balls sealing victory at the death.

The deadly duo of Leah Fox and Muireann Devaney led the way even if they had a slightly off-day by their standards with some uncharacteristic bad wides and it was Amy Fowley who provided the goals, one in each half, that kept St. Clare's alive in this game.

Glenamaddy looked a class above in the first half but they couldn't match the physical fitness of St. Clare's in the second and it was from placed balls that the Manor school really took control, scoring 2-7 from penalties and frees to just one for the Galway school.

Some Glenamaddy supporters vented their fury at the referee following the final whistle and they certainly had a case that they didn't get too many frees. But it can't be argued that the frees that St. Clare's got were not as a result of fouls.

This latest triumph is a huge achievement for St. Clare's, just a year after they won the All-Ireland C title and while this team is probably not quite as strong as last year, they certainly know how to win games when the pressure is on and that is priceless, something that can't be taught.

Lauren Conneally opened the scoring for Glenamaddy but St. Clare’s looked as if they had got off to a perfect start when Amy Fowley showed real poacher’s instinct to knock a bouncing ball from the grasp of the Glenamaddy keeper and into the net on four minutes.

However, Glenamaddy’s response was deadly - Eva Noone put over a point before Caitlin Boyle and Niamh Divilly both struck for goals in the space of a minute, Divilly’s shot deceiving the keeper to dip into the far corner.

Muireann Devaney and Leah Fox both had shots saved by the Glenamaddy keeper while Aine Shaughnessy hit the post for the Galway girls. Devaney (free), Fox and Rachel Conlon all grabbed points with a Amy Ward point in response.

But with five minutes to go, Glenamaddy struck what looked a deadly blow with two goals in a minute, Lauren Conneally goaling after a quick free when Hannah Johnston fouled and from the kickout, Amy Ward pounced on a poor kick.

Leah Fox, from two frees, with swap points with Shaughnessy and Eva Noone before Noone finished the half with a late point, leaving the halftime score 4-7 to 1-5.

St. Clare’s needed a good start and they got it - after a Devaney point, Amy Fowley gathered a long ball, dodged a defender and drove the ball to the net on two minutes. A minute later, Leah Fox found the net a minute later, her shot deflecting off a defender and into the net and suddenly there was just four points between the teams. Fox would then add three good points in a five minute spell to leave St. Clare’s just a point in arrears and 17 minutes left to play.

But Glenamaddy had other ideas and a long free found Tara Tevenan in behind the defence and her shot found the net. However, a Devaney free was quickly followed by a penalty when Leah Fox was fouled and Devaney drilled the ball to the net to level the scores.

With 13 minutes to go, St. Clare’s looked in the driving seat but Amy Ward edged her side in front after a good move. A Devaney free tied the score a minute later but with both teams finding it hard to get scores, it wasn’t until the dying seconds of the game that Amy Ward scored a huge point to edge Glenamaddy back in front.

But then the game took another twist when Glenamaddy keeper Kellie McGann made a great save to deny Devaney a goal. Devaney ran in, grabbed possession and in the resulting scramble, with players from both teams clashing, a penalty was awarded.

McGann, the keeper, had to go off with a head injury and Devaney drilled the spotkick to the back of the net, the goal breaking Glenamaddy’s resistance with Devaney scoring two injury time points to secure the win.

MAIN WOMAN - Muireann Devaney and Leah Fox again led the way for St. Clare's but Amy Fowley's two goals were crucial scores at a critical time. Mairead Clancy at full-back was outstanding at full-back while Hannah Johnston, fortunate with a couple of tackles, was a huge presence for the winners.

TURNING POINT - Amy Fowley's goal just after halftime kickstarted the St. Clare's fightback, one that didn't look likely at halftime when they trailed by 11 points. But once Fowley found the net, the confidence of the Manorhamilton school suddenly went through the roof and players who were struggling suddenly were winning every single ball. A big score in every conceivable way.

TALKING POINT - St. Clare's girls are really setting the standards - this team contest an All-Ireland Semi-Final, their Senior B footballers are in a Connacht Final and their Soccer team are in the All-Ireland Final, drawing players from the same pool.

WHAT NOW? The All-Ireland Junior semi-finals are scheduled for the weekend of March 23/24.